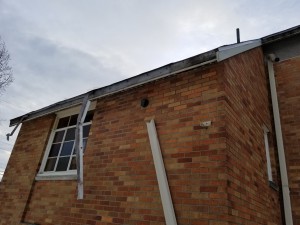 The Elmwood Avenue Presbyterian Church in Erie, PA, suffered structural damage due to extremely heavy ice and snow build up but continues their joyful and faithful service in their community.

Erie, PA, is a wonderful place to live. Presque Isle State Park includes miles of sandy beaches. Moderate summer temperatures reduce the oppressive humidity experienced in other regions of the country. Minor league baseball, basketball and hockey franchises provide the opportunity to see rising stars – for a fraction of the cost – on their way to the major leagues. The arts community is vital. A new mayor is providing fresh perspectives to small city challenges. An increasing focus on the downtown and Bayfront neighborhoods enhance both work and recreational opportunities. The city of 100,000 is surrounded by suburban communities, as well as miles of grape vineyards along the lakeshore. It is a delightful region.

But sometimes it snows. And occasionally (though not as often as some people think) it forgets to stop snowing. December 2017 was one of those times. The record snowfall for the month of December in Erie was 66 inches. December 2017 found more than 120 inches officially measured at the Erie airport.

Honestly, that is not as bad as it sounds. School districts in the region rarely close. Most of the rural school districts did not miss a single day of school in December (although, truth be told, a large portion of the snow fell during their Christmas break). On Dec. 26, I (General Presbyter David Oyler) drove 20 miles from my home to the presbytery office for work even though it had snowed 50 inches in the previous 36 hours. The journey was a bit slow but manageable. Presbytery Administrative Assistant Melinda Wingenbach lives just a few blocks from the presbytery office in a residential neighborhood so it did require more than 24 hours for her street to be cleared. And an additional 15-plus inches late in the week did require the canceling of many worship services the final Sunday of the year.

Nevertheless, life went on. Not a single presbytery committee meeting was canceled… but then the snow began to melt. Roofs began buckling under the weight of icicles weighing hundreds of pounds as well as enormous amounts of heavy, wet snow. And that’s when other issues developed. The icicles and wet snow, along with catch basins blocked by snow, all created problems across the city. 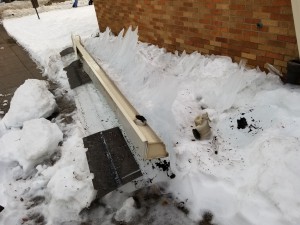 Spouting lays in the snow at Elmwood Avenue Presbyterian Church.

The Lake Erie Presbytery office is housed at Elmwood Avenue Presbyterian Church in southwest Erie. As the melting continued, it was quite clear in the low rumbling and vibrations on the afternoon of Jan. 10 that something bad was happening. As temperatures warmed into the 40s – and beyond – the ice and snow, along with soffit and fascia and downspouts and gutters that had served the church wonderfully well for decades, met their untimely demise. Not simply on one side of the steeply pitched sanctuary roof, but on both sides. The Elmwood Church experience was multiplied across many structures in the city in early January.

But no one was injured at Elmwood. And life and ministry continues on in the city and lakeshore region – a long obedience in the same direction. Through it all the church continued to serve as a hub for their southwestern Erie neighborhood. They host daily Alcoholics Anonymous groups, a food pantry, the Erie Free Store, Scout groups and other community groups. Structural damage due to snow and ice damage in early January has not deterred them from their focus on their ministry in the community.

Other churches and social service ministries continue to go the second mile in caring for others. Our Neighbor’s Place, which is housed a portion of each winter at First Presbyterian Church of the Covenant, continues to host overnight homeless guests in daunting conditions. The City Mission, and many others, continue to check on neighbors, offer help where possible and encourage those who face daunting challenges. And in it all, under these weather stresses, the grace of God is demonstrated. Erie is a wonderful place to live!