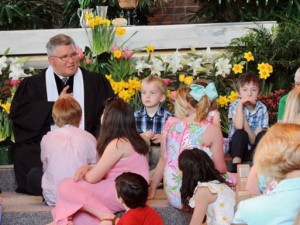 For some, it might be Hawaii or a remote island. For others, it could be in the mountains or at a sporting event. But for the Rev. Keith Sundberg, his “happy place” is at the annual Association of Presbyterian Church Educators gatherings.

“I can go and be myself, ask questions and don’t have to explain myself or why I’m asking those questions,” he said. “We can care for each other. It’s really quite a remarkable organization.

“Literally, it’s the first place that has fed me, educated me and supported me in my ministry.”

Keith, the associate pastor at Wayside Presbyterian Church in Erie, PA, has been present at the last 18 national APCE events and will add one to that count in early February when he travels to Galveston, TX, for the 2019 gathering. However, Keith will be more than an attendee this year as he’ll also be an award recipient when he is honored with APCE’s Educator of the Year award. Keith, who has been at Wayside for 18-plus years, is humbled by the recognition.

“I have colleagues with incredible abilities,” he said. “I would not say that I am better or set apart from others. I think the organization has chosen to thank me along with three others for ministry. The award that I am receiving is one that indicates that I have spent my career helping to educate other people, taking the time to teach educators, pastors, elders, children and youth about their faith by providing workshops and retreats.

“It’s a nice feeling. When I’ll look out over the crowd and see the talented people that do this day in, day out, I don’t think it’s a superlative award as much as one of gratitude.”

Keith is the second person in as many years from this region to receive an award from APCE following Forrest Palmer’s Lifetime Achievement honor last year. Like Forrest, Keith has been an integral person in helping to keep APCE afloat following some lean years in which the organization nearly had to close its doors.

A co-chair of the national event in 2015, Keith spent the year leading up to that meeting “fundraising” by applying for grants that would help keep APCE going. One of the grants was a $3,000 Network Grant from the Synod of the Trinity. 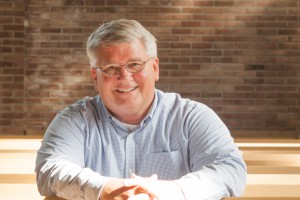 “The Synod of the Trinity came through and was incredibly helpful,” Keith said. “That made it possible for us to continue. We began with the planning committee to plan an event that was financially possible. One of the things we started to do was ask organizations, agencies and offices of the church to help us. We were able to raise money and it literally switched the loss to a positive of $50,000. It was a swing of $100,000 in one year thanks to the Synod and other good folks who were able to help us.”

Keith’s commitment to keeping APCE going was a true labor of love, and he plans to reflect on the impact the association has had on his life when he’s in Galveston.

“I’m going to thank them for giving me all of the ideas over the years and coming back to northwest Pennsylvania and looking like I was smart,” he joked. “I stole all of their ideas. This is an opportunity for me to thank them for the wisdom, insight and understanding of what it takes to do spiritual formation of ministry.”

For those who are new to APCE, the annual gathering features plenaries with speakers, worship services with engaging preachers and musicians, workshops and an area to purchase curriculums and other education resources. There are also numerous regional APCE gatherings that occur annually. The East Region meets in the spring at Rhoades Grove Conference Center in Chambersburg, PA.

“Eastern APCE is a wonderful resource to pastors, educators, elders and teachers right in our own midst,” Keith said. “It’s modeled after the national event and is just a phenomenal experience for three days. My hope would be that folks would avail themselves of the fellowship, conversation and the resources that are available to them through that group.”

Wayside Presbyterian Church is Keith’s home church, so for him to be able to serve for nearly two decades the congregation where he grew up is not something he takes for granted. After leading congregations in Erie and Bethlehem, PA, he spent some time in the funeral business before returning to the ministry field and landing back at Wayside.

At Wayside, Keith has been part of a Fall Convocation that brings in national speakers to introduce ideas to the Erie community. For instance, one year Wayside connected with a local Jewish community to plan a weekend of joint lectures and discussions that culminated with combined Sunday school and worship at Wayside.

“That weekend with the combined children’s choir, people singing in Hebrew, having Amy-Jill Levine preaching was just probably the high for me and for our congregation,” he said. “We are known for children’s ministries and working with young people. We’re an academic congregation, so we bring in speakers all the time.

“The congregation is also known for its generosity to the poor. That has been the other pastor’s (the Rev. Dr. James Bernhardt) area of work and I’ve tried to simply teach it with the children and encourage them to understand that.”

Keith learned that he would receive the Educator of the Year award at last year’s event when he was approached by the chair of the awards committee immediately following the event and told he would be honored this year.

“It was a complete surprise,” he said. “I was absolutely dumbfounded. I was really shocked. It was a very nice moment.”

Keith will have a similar moment one year later when he is honored with APCE’s Educator of the Year Award. It’s something he knows he’s not accepting completely on his own.

“I’ve always sensed that God was in the planning and ministry (for me),” Keith said. “At one point I said to a couple of friends, ‘You know, without God’s help, I couldn’t have done any of this. How much credit am I allowed to take?’ Maybe what people are seeing is that I have tried to be aware of God’s presence and convey that into the work I’ve done.”