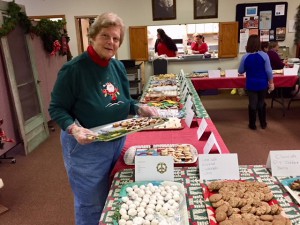 Carol Rick works on displaying some of the estimated 5,000 cookies that were available at First Presbyterian Church of Hawley, PA, in early December.

Every year for the past 16 years, a rush of people enters the fellowship hall at the First Presbyterian Church of Hawley, PA, in search of baked goodies. And there’s always plenty to choose from on this early December Saturday. In 2017 alone, an estimated 5,000 cookies were available in 33 variations of flavors, and in a matter of a few short hours they were all scooped up.

The church’s annual Cookie Walk, which is one of the prime stops for buses during Hawley’s annual Winterfest, raised in excess of $3,000 this year, with the money supporting various community events that are produced by First Church.

“It’s a major event,” said the Rev. Bill Samford. “It brings everybody together.”

The Cookie Walk began during year 2 of the Winterfest when a member, Carol Rick, of First Church read a magazine article about a similar fundraiser and suggested the church do the same for Winterfest. The first year $2,000 was raised, and that number has gradually increased during the years. People are given plastic gloves and a box when they enter the fellowship hall and can pick up as many cookies as they’d like. Once they are finished “shopping,” the boxes are weighed, and the customers are charged $11 per pound for the cookies, which are donated completely by church volunteers.

“This year we had 35 different members of the church bake cookies,” Bill explained. “They take favorite recipes that have been in their families for years and they bake anywhere from six dozen to 12 dozen of them. We’re in a resort area, so we have a lot of summer people who come just for the summer, and some of them actually participate by baking and dropping them off before they leave to wherever they go home to. We freeze them and use those cookies as well.” 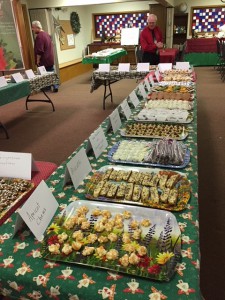 While the regular run-of-the-mill cookie flavors like chocolate chip, oatmeal raisin and snickerdoodles are certainly available, the congregation is well-rounded in the kinds of treats it offers, which is everything from Welsh cookies to apricot chews.

“We’re known for our variety of cookies,” Bill said.

First Church also provides a Victorian Luncheon during Winterfest, where for another $11 (under 10 is $6) a person can enjoy a four-course meal that includes finger sandwiches, assorted quiche, scones with Devonshire cream and a petite dessert selection. Coffee and tea are also part of the menu, and because of the popularity of the luncheon reservations are suggested.

“About 2-3 years into it (the Cookie Walk), the idea of a high tea or Victorian tea luncheon became a part of it and now that has become a tremendous part of it,” Bill said. “Despite the (snowy) weather, we still served about 90 luncheons (in 2017).”

The money raised from the Cookie Walk and Victorian Luncheon support various ministries of First Church. Among the most notable is the “Spring for Kidz” event that occurs during Memorial Day weekend. This community gathering has a carnival feel to it, as things like bouncy houses, face-painting and a petting zoo have brought over 500 people to the church’s grounds.

Another outreach that benefits from the funds raised is a community luncheon that First Church participates in. First Church hosts the Good News Café on the second and fourth Saturdays, alternating with two other churches so that there is a free meal available in Hawley every Saturday.

“We’re pretty sure this is probably the best meal of the week that some are getting,” Bill said. “It’s a great community outreach.”

These programs have created renewed energy at First Church. 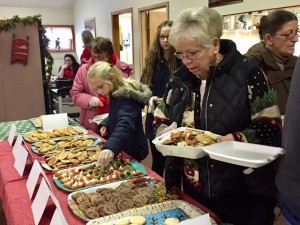 The Cookie Walk is a highlight for many during Hawley’s Winterfest.

“The Cookie Walk, combined with other activities and other outreach programs, has made people aware that our church is there and over the years has attracted people to come,” Bill said. “It’s part of the whole change and outreach that we have been able to do in the last 25 years and has caused us to grow and expand our outreach.”

An increase in membership – from 30 when Bill started in 1990 to 140 today – has enabled First Church to buy back the manse property it had sold several years ago. The church is also involved in its third addition to the building during Bill’s tenure.

“It’s been a great 28 years,” Bill said. “It’s been a wonderful time to be here. We have grown, not only in numbers but also in outreach to the community.”

It also shows the worshipers at First Church that they do have a purpose in this community, and it’s one that they seem to be embracing with each passing year.

“The spirit of working together, you see God’s presence there,” Bill said. “Church is the one place that brings people together and to work together for a common cause. It’s one of the unique features that the church has to offer, and God’s presence is certainly felt in that experience.”