“Why do you keep shooting us?” 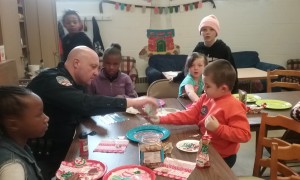 That powerful question was recently directed at a police officer by a child at an after-school program at United Presbyterian Church of New Kensington, a racially-diverse neighborhood in western Pennsylvania. The question is a stark reminder of what has become an all-too-common occurrence in the United States these days.

That child’s question struck a chord with the church’s Director of Christian Education, Stacey Oden. Prior to that conversation, Stacey had asked the youth in the after-school program to write thank-you notes to the local law enforcement for a community recognition day. They declined.

Feeling like she needed to do something to help repair this frayed relationship, Stacey decided to create a Cookies with Cops program. Coinciding with National Cookie Month, local police were invited to bake cookies with the after-school program on Mondays in October. It was during one of these baking sessions when the youngster asked that heart-felt question.

“Yeah, that really stinks, doesn’t it?” said the officer as recalled by the Rev. Wendy Keys. “Let’s talk about that.”

Quickly, a bond between t 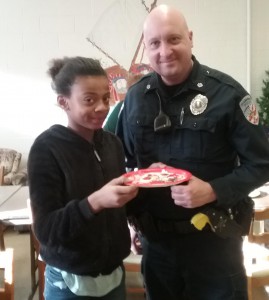 he New Kensington Police Department and the youth in the area was born.

“Once the kids started playing games and baking cookies with the cops, they were like, ‘This is great,’” Wendy said. “We’re trying to keep them (the police) in their face so the cops aren’t here just one time. They’re in our community and they’re here to help us. She (Stacey) has really tried to bridge the community with the police to help some unity form.”

Not only did Cookies with Cops begin to mend that relationship, it also served a second purpose as it provided treats for the church’s upcoming Fall Festival at the end of October. The program was such a success that it was continued during the Christmas season and picked up again for Valentine’s Day. A fourth run is planned for St. Patrick’s Day.

At the November borough council meeting, the chief of police was presented with a basket of cookies and a book of pictures from the church to share with the department as another sign of togetherness.

“The police officers who were here loved it,” Wendy said. “They really enjoyed just being able to be with the kids. I kept hearing from all of them, ‘We wish more people would do this.’

“It’s a great bridge-building thing that Stacey has done in helping our kids realize that the police of this area really want to help them and be friends with them and care for them, and it isn’t always about shooting somebody.”

United Presbyterian Church holds two after-school programs: one is on Mondays for kindergarten through sixth-graders and the other is Wednesdays for seventh- through 12th-graders. It’s the younger group, which consists of about 15 kids, that baked the cookies with the one or two police officers who were available to participate in the program on a weekly basis. 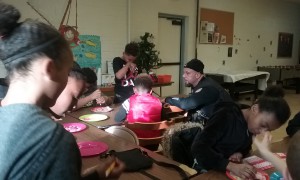 During the summer months, there’s a “Popsicle Ministry” that occurs on Wednesdays, with Stacey standing on the corner of the church lot with a home-made cart and offering the cold treats to anyone who would like one.

A backdrop for all of this is the message being sent from United Presbyterian Church to the youth and the New Kensington area as a whole.

“Stacey wants the kids to know that they’re loved in this community, and they are loved not just by us in this church but also the officers love them and respect them,” Wendy said. “We’re just about giving these kids a safe-haven from the stuff that they go through on a daily basis.

“It’s a very diverse community. We just have kids coming in here knowing that they are loved and cared for and it’s just a little escape for them from the rest of their world.”