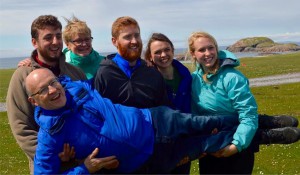 Hillary Leslie, second from right, enjoys a moment with her fellow Young Adult Volunteers and site coordinator during a retreat in Iona, Scotland.

Growing up, Hillary Leslie didn’t attend a church on a regular basis. But as an early teenager sensing a need for more, she accepted a friend’s invitation to visit New Wilmington (PA) Presbyterian Church. It was on that day that she became involved with the youth group there, learned of an upcoming mission opportunity to New Orleans to assist with cleanup following the devastation of Hurricane Katrina and immediately signed up for the trip.

“That was one of the biggest decisions I’ve ever made deciding right away that I felt like I should be going to New Orleans on this mission trip,” Hillary recalled. “I didn’t really know why, I just did it. My parents were kind of freaking out because I was 14 years old and I was like, ‘I’m going to New Orleans and help rebuild homes.’”

Little did Hillary know at the time that she would later spend a year of her life in “The Big Easy” as part of the Presbyterian Church (U.S.A.)’s Young Adult Volunteer program. Being a YAV allows 19- to 30-year-olds to participate in a yearlong service opportunity in any one of 15 locations across the United States or at one of five international sites. Hillary is currently in the second year of service in the program, having spent the 2015-16 YAV year in Belfast, Northern Ireland, before her current term in New Orleans.

“I was always somebody who was pretty quiet growing up and never really went after too much adventure and erred on the side of caution,” Hillary said. “I think that that (mission trip to New Orleans) really got me out of my shell in a lot of ways.”

A second transformative moment occurred in Hillary’s life a few years later, and again it happened at New Wilmington Church. She had just graduated from next-door Westminster College and had spent some time working at Ligonier (PA) Camp and Conference Center when she took in a Sunday service. It was that morning that a Young Adult Volunteer explained about the program and gave her testimony, opening Hillary’s eyes to what would become the next phase of her life.

“As I was sitting there making notes in my journal about things I was passionate about and what I could see myself doing, she was talking about the YAV program and I was able to tick off all of the boxes,” she recalled. “It just seemed like a great opportunity.” 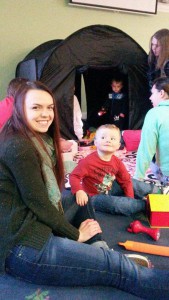 After researching the program, Hillary decided to apply for placement in Belfast, with South Korea and New Orleans being her second requests. She was granted her first choice and was paired with two organizations for her year of work in Northern Ireland.

“I felt most strongly called for that site (Belfast),” Hillary explained. “I had studied abroad in Scotland, so I had a little bit of the feel for the culture over there. I knew a little bit about the Catholic and Protestant divisions in Belfast. I also liked that you worked for the church and also a community organization. I was really drawn to having the combination of both.”

Before heading overseas, Hillary had to raise $4,000 as part of a YAV program requirement. While it costs in the neighborhood of $20,000 per year to host a YAV, they are only required to fundraise $4,000 for overseas sites and $3,000 for ones in the States. A $500 Peacemaking Grant from the Synod of the Trinity helped Hillary in her fundraising efforts. (For more on the Synod’s Peacemaking Grant, click here.)

In Belfast, Hillary, who did receive a $400-a-month stipend for her YAV work, was paired with Garnerville Presbyterian Church where she worked with the Sunday school and youth groups and regularly had a role in the worship service as well. She was also integral in helping to plan and organize any special events at the church and was involved in the church’s partnership with the nearby Church of Ireland by coordinating prayer breakfasts and combined services.

Once a week she also worked with a primary school (ages 11-14) that was affiliated with the church, teaching a personal-development class with the minister. Twice a week Hillary also helped organize a mothers and toddlers group at the local community center. She did everything from schedule the meals to planning and leading an after-school Bible program. Hillary was also involved with a homework club for youths and a lunch club for seniors.

“It was a combination of working with a lot of different age groups, from the toddler age up to senior citizens,” Hillary said. “Whatever was happening in the church I was always there to help out.”

With a year of YAV work under her belt, Hillary was counting on having found her true calling by the time her stay in Belfast was over in the summer of 2016. However, that simply didn’t happen.

“I was hoping that my first year would lead to me finally discovering what I was meant to do,” she said, “but I think doing the YAV year opened so many more doors and made me realize that maybe what I thought I was supposed to be doing wasn’t what I was meant to be doing. I decided that it might be a good idea to do the YAV program again but have a work-site placement that was quite different to the one I had the first year to further discern where I was feeling myself being pulled toward.” 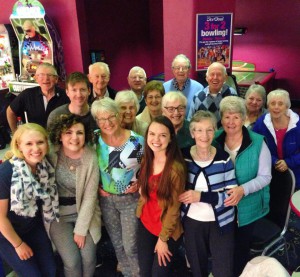 Hillary Leslie even picked up a few spares from time to time working with the Garnerville Monday Night Bowling Club in Ireland.

Having earned a college degree in English, Hillary considered teaching as a career, but now she was also contemplating going down the road of youth ministry or even social work. Still feeling that pull toward New Orleans, she decided to enroll in a second YAV year and was granted her new first choice along the Gulf Coast of Louisiana.

“New Orleans was more heavily on the social justice advocacy work and non-profit side and I thought that would give me more of a grassroots look at ministry,” she said. “I just wanted to get another perspective into mission work and ministry work.”

A second Synod of the Trinity Peacemaking Grant, this one for $300, again helped Hillary meet the necessary YAV fundraising goal to reserve a spot in New Orleans where she is working with YMCA Educational Services to help improve the adult illiteracy rate here, which has one of the lowest levels in the country. Through the East New Orleans Regional Library – an area that still hasn’t bounced back following Hurricane Katrina – Hillary helps people with resume building, online job applications and even acquiring things like unemployment.

“It’s a lot of digital literacy or workforce literacy,” Hillary explained. “It’s trying to get people who might be in that age range where they never had that experience on a computer to teach them how to use it so it’s not a barrier for them getting a job or getting benefits.”

Hillary also helps out with an adult education class by teaching math and English skills to people who are trying to get their high school diploma. She will continue at these jobs until her YAV year concludes at the end of July. Then it will be another time of discernment for her following two years of service.

Hillary is considering heading back overseas to the United Kingdom for some youth work and has already started the application process to attend Pittsburgh Theological Seminary, although that is admittedly “on the back burner” at the moment. 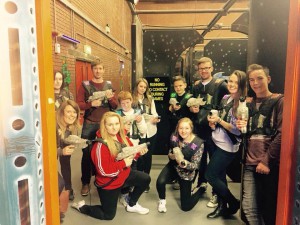 Hillary Leslie hangs out with the Garnerville youth group before a game of laser tag.

“I’m feeling called to having a career at least for a little while and then seeing if studying theology is going to be something that I needed for the career choice I choose and a lot of that comes down to financial reasons and the three-year time commitment,” Hillary said.

One thing that can’t be overlooked from the YAV program is the living situation. In Belfast, Hillary lived with three other YAVs, and in New Orleans she is teamed up with six others. That support system and relationship building will go far in helping Hillary in her next stage of life.

“One big aspect of the YAV program is living in an intentional Christian community,” she said. “You spend a lot of time learning how to understand people. In college you have roommates but it wasn’t this intentional aspect of ‘How can we be there for each other to teach each other how to grow? How are we intentionally making sure that we’re supporting each other in this journey?’”

It’s just one of the many positives that come from the Young Adult Volunteer program, and one of the things that Hillary will build on as she moves forward.

“Looking back in retrospect it makes perfect sense that I ended up in the YAV program because my time spent going on mission trips and being involved in the church was really something that grew me as a person,” Hillary said. “It helped me develop as a person just in understanding who I was and that was from high school into college. The fact that I had just graduated from college and wasn’t really sure what was next and I went to church that next Sunday and heard something that just seemed to click – and that was right after I spent a few months praying about what was next and kinda freaking out about the next thing.

“I really felt like that was God speaking to me. I never really think that God does speak to me directly but it’s always looking back on the way that he’s connected a lot of the decisions in my life has made me realize, ‘Oh, he really was helping me figure out my calling in very subtle ways because I can see all of the interconnectedness of my life.’”