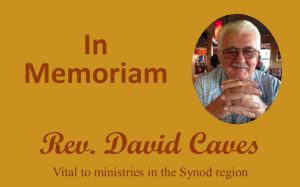 Anyone who was acquainted with the Rev. Dave Caves knew he had great devotion for the church. And he would do what it took to make sure ministries that strengthened the church were carried out.

“He had an incredible passion for working in prison ministry,” recalled the Rev. Dr. Don Wilson, the general presbyter at Kiskiminetas Presbytery where Dave resided. “You can’t go anywhere without someone talking about how he was one of the biggest advocates for the fact that we needed to be involved with the ministries in prisons.”

Dave passed away Sept. 21. He was an integral part of both Kiskiminetas Presbytery and the Synod of the Trinity. At the Synod level, he was a commissioner and served on the Self Development of People and Nominating committees. The 78-year-old was a stated supply pastor at West Glade Run Presbyterian Church in Kittanning before retirement. He also served Grace Church in Kittanning plus the Brookville and Freeport Presbyterian Churches (also in Kiskiminetas Presbytery) while also leading East Liberty Church in Fayette, PA, (Redstone Presbytery) and Clear Fork Larger Parish in West Virginia.

“David was a very outgoing person,” said the Rev. Wayne Yost, the stated clerk of the Synod of the Trinity who served with Dave in Kiskiminetas prior to joining the Synod. “He had a generous spirit.”

Dave, who was very involved with the Presbyterian Men of the Synod for several years, was also a part-time staff member at Kiskiminetas Presbytery, overseeing programs related to church growth and evangelism.

But it was his involvement with prison ministries that set him apart. As far back as the 1970s, Dave helped Kiskiminetas connect with the Christian Associates of Southwest Pennsylvania, which is a collaboration of religious leaders from the Pittsburgh area. It was their work with prison ministries that drew him into that group, and once connected, Dave knew the presbytery needed to be a part of it as well.

“He was incredible for the presbytery,” Don said of Dave. “He had an incredible love working with everybody.”

In fact, Don’s last conversation with Dave came a week before his death regarding the presbytery’s boundary training. Dave expressed his desire to be at the gathering despite his failing health.

“With only a few days to live he was more concerned about serving the presbytery,” Don said. “What can he do to be a part of the body of Christ and be supportive of the other pastors. He was extremely supportive of other pastors, more so than I have seen anybody.

“If anybody had a question, he was willing to sit down with them, talk with them and work with them. He did a lot of mentoring of some of what are now the older pastors in this presbytery. They will tell you about his pulling them aside and talking with them.”

It was Dave’s ability to connect with others one-on-one that set him apart.

“He was a very attentive, loving and caring pastor,” Don concluded. “He exemplified the word ‘pastor.’ He had incredible passion about being ecumenical with other Christian denominations. He wanted to know how we can care about and love everybody and he had that attitude. He was a remarkable man.”

A complete obituary is available by clicking here.

The Synod of the Trinity is thankful for Dave’s work and service to the region and sends condolences to his family and friends.