Malawi next challenge for Chuck and Deb Monts to conquer 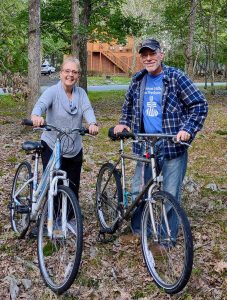 Chuck Monts and his wife, Deb, will be using bikes as their primary mode of transportation during their upcoming year of service in Malawi, Africa.

In 2000, the Rev. Chuck Monts traveled to Malawi, Africa. During his month-long stay, the current temporary supply pastor at Pleasant Valley Presbyterian Church in Brodheadsville, PA, experienced the poor infrastructure, rugged living conditions and poverty-stricken way of life that the natives cope with daily. Following the trip, Chuck went on to serve churches in Pennsylvania and New York while also working and serving in places like a YMCA in Queens and The Bowery Mission in Manhattan, but something kept pulling him back to Malawi.

Now fully rested from last year’s two-month, 3,000-mile “bike hike” from Los Angeles to New York that benefited The Bowery Mission, Chuck and his wife, Deb, are traveling east again, this time back overseas to the African country that left an indelible mark on them both.

“Our denomination isn’t sending out volunteers anymore,” Chuck explained. “Because the PCUSA isn’t doing this, I had to put on my thinking cap and think where’s the place that will open the door most easily? In my years of doing mission trips with youth for 20 years, I’ve learned that you call and churches either open the door or they close the door. We threw some possibilities out there and Malawi opened the door.”

Because of contacts Chuck had made during his trip to Africa in 2000, he was able to reconnect with a Presbyterian synod there and received a quick welcome to return. Chuck and his wife were offered opportunities on the synod’s campus in the capital city of Lilongwe, which not only has a seminary where Chuck will teach but also a hospital where Deb, a registered nurse, can work. Neither Chuck nor Deb will receive wages for their efforts.

Chuck also contacted Villages in Partnership (VIP), which is led by a Presbyterian pastor and his wife who helped Chuck and Deb get a greater first-hand understanding, context and guidance of what to expect during their year of service in Malawi.

“We want to serve people, and Malawi is one of the poorest nations in the world,” Chuck said. “It’s a people in need. The other reasons are they speak English, so we don’t have to learn a very difficult language, and it’s a Presbyterian-oriented nation.

“They are also very gracious. They’re known as the warm heart of Africa. People who have so little can humble me by how generous they are. When I was there it was unsettling to be shown such generosity, warmth and hospitality. They are very Christ-like in their hospitality and generosity.”

Chuck and Deb plan to leave for Malawi in mid-January for the 11-month excursion. While Chuck hasn’t received his direct orders on what he’ll be teaching, he’s expecting something in the line of theology or Biblical studies to be a major part of his future curriculum.

“Beyond the material, I look forward to the connection that will be built between me and the students,” Chuck said. “I will be coming in and having this amazing opportunity to make a personal, human connection with students who maybe see me as a teacher or a professor. I look forward to being the kind of guest instructor who can connect and teach not just through materials but how I treat them and how I spark their imaginations.”

Chuck expects to be invited to preach while he’s in Malawi as well. The fact that he will be a white man in a predominantly black country is not something that is lost on him.

“It (the color difference) might not be in their head or heart, but it is part of my head and heart,” he admitted. “Here I am being asked and honored to preach thinking, I should not be the one up here preaching. I should be, if anything, asking for forgiveness.

“The country from which I’m coming is broken. I can’t unthink the history of slavery, of colonization, of racism. There’s some of that going on in our country right now. I go into this not denying racism but being sadly and keenly aware that I continue to be part of a culture that denies racism.

Despite many unknowns, it’s a journey halfway around the world that the Montses are embracing.

“This experience Deb and I have dreamt about for a long time,” Chuck said. “The truth is, Deb and I expect to grow, learn and receive probably more than we give. That’s the way it was in 2000. I came back a better preacher because of that month. We fully expect to receive fruits of the Spirit at work from them to us.

“That’s very helpful when you’re an American to go to a country like Malawi and come away with a deeper, more rooted sense of gratitude, compassion and humility based on how these people treat guests. As much as we’ll give, we expect to receive more.”

Chuck’s final service at Pleasant Valley Church is scheduled for Christmas Eve, but that doesn’t mean he won’t be seen there or anywhere else in the United States during 2023. He will be taping sermons that churches can use as well as short videos that can be discussion starters for small groups. In exchange, he’s asking congregations to support his volunteer efforts in Malawi.

Chuck estimates that the cost of the flight for him and his wife to Malawi will make up more than one-quarter of their expenses during their time in Africa. He’s hoping to raise $40,000 and plans to tithe 10 percent of whatever is raised to give it to mission and ministry in Malawi.

Anyone wishing to donate can do so online through the giving page (click here) on the website created for the Montses mission trip (click here). Information is also available on the Montses Facebook page by clicking here.

Bicycles will be the predominant mode of transportation for Chuck and Deb, which means Chuck will have a two-wheeled vehicle at his disposal should he wish to tour the country. He didn’t rule out the possibility of taking a trip from the northern border of Malawi to the southern border, a ride that would cover 550 miles and mimic last year’s trip across the United States. It would be a bow on an 11-month trip that promises to have a lasting impact on the Montses.

“We’ve been God-Blessed,” Chuck concluded, “and part of being God-blessed is to be sent out. We’re just fortunate that God has gotten through to us.”

Note: For more information on Chuck’s trip, he can be contacted by email at chuckdelos@gmail.com.