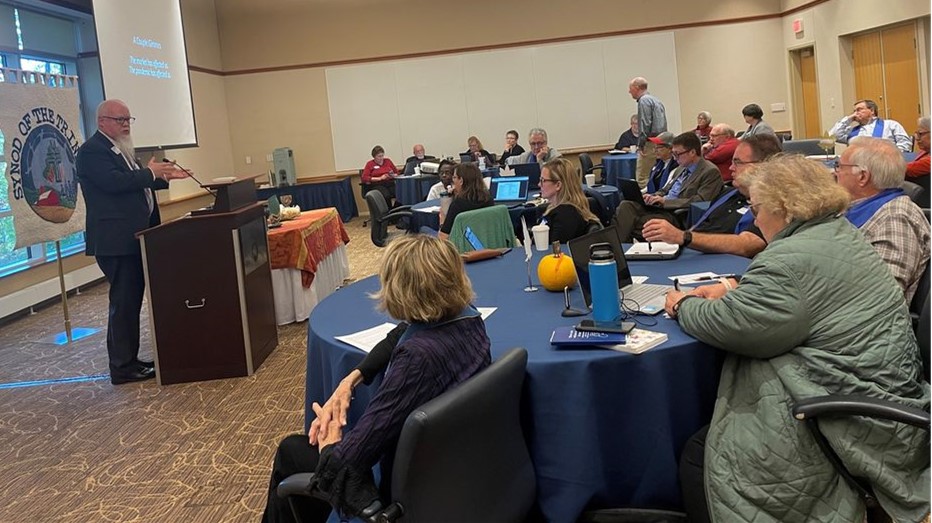 The 2022 Synod of the Trinity Assembly was a hybrid gathering held in-person in State College, PA, and through video conferencing platform Zoom in late October. Below are highlights of the meeting.

Even though Forrest was elected as the Synod’s executive at last year’s online Assembly and began his service to the Synod on Jan. 1, 2022, it wasn’t until this gathering that he was installed by Synod Co-Moderator Martha Jordan (Lackawanna).

With the impending retirement of Synod Stated Clerk Wayne Yost at the end of the year, Michael (Donegal) was nominated by the Stated Clerk Nominating Committee, endorsed by the Governing Commission and elected by the Assembly to fulfill those duties beginning Jan. 1, 2023. Brian Ellison (Synod of Mid-America) was named as the stated clerk pro tem to cover Michael’s duties while he’s on a scheduled sabbatical next summer.

Bernice Adams (Redstone) was elected for a second term as co-moderator of the Synod. She will be joined next year by Brian Choi (Huntingdon), who will fill the vacancy of Martha Jordan. Martha will end her two-year stint as a co-moderator on Dec. 31. 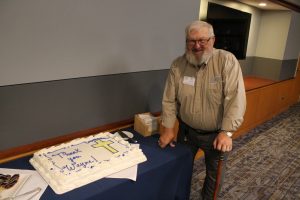 The Synod stated clerk was honored with a cake and ice cream social on Monday evening. Wayne, who has served in this position since 2013, was celebrated with a few gifts and stories from peers who shared their appreciation for his work through some humorous anecdotes.

Forrest gave his report on Monday afternoon, listing several observations he has made in his first 10 months serving the region. They are: 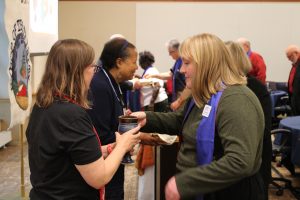 John, a former Synod moderator and commissioner from West Virginia who was the chair of last year’s Synod Executive Search Committee, spoke on Matthew 17 and “The Transfiguration.” Bolt likened the election of Forest and the first months to a mountaintop experience, one that Peter didn’t want to end so he wanted to build tents for Jesus, Moses and Elijah. But Bolt noted that after the bright light of the mountaintop, the first thing Jesus did was get right back to work, healing an epileptic.

“So, hang on for the long haul because there’s work to be done,” Bolt said. “People to be fed. Wounds to be healed. Communities to be made better. Lives to be changed. People to be taught about grace. Neighbors to be treated like we want ourselves to be treated. It’s all hard work, but it’s the kind of work that, in the end, is exactly what Jesus has told us to do.

“And remember that on that mountaintop, when Peter, James and John fell down in fear, Jesus was there, reaching down, touching them, and saying, ‘Get up and do not be afraid.’”

Ned Wetherald, the Director of Music at State College Presbyterian Church, provided piano accompaniment throughout Monday’s portion of the Assembly.

Several recommendations from the GC to the Assembly were passed Monday afternoon. They were:

The financial report included a 2023 budget overview. The Synod’s per capita amount for 2023 will remain at $2.40, which was announced at last year’s Assembly. It was also reported that the per capita figure will stay at $2.40 for 2024, marking the fifth consecutive year without an increase in this amount. 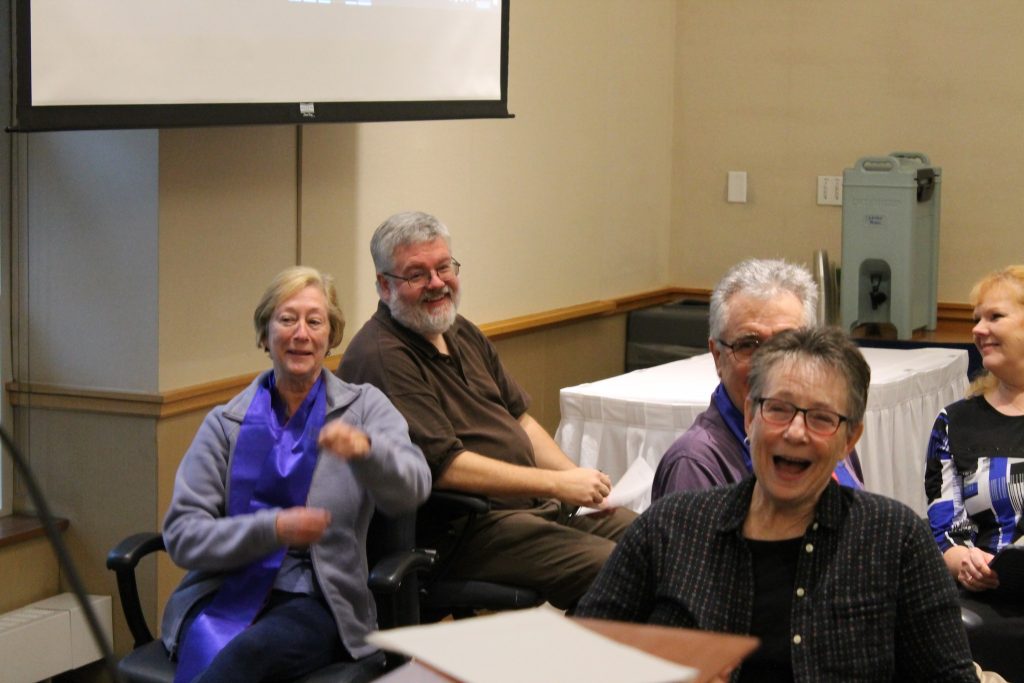 Getting to Know Our Presbyteries

The Assembly featured activities enabling Synod commissioners and presbytery leadership familiarizing themselves with one another. The activities included:

Eleven in-person and recorded video presentations enabled presbyteries and congregations to share some unique ministries and best practices that can easily be shared in other parts of the region. Among the presentations were:

Ruth Santana-Grace, a co-moderator for the 225th General Assembly (2022) of the Presbyterian Church (U.S.A.) and executive presbyter of the Presbytery of Philadelphia, delivered a message from the denomination through a recording. She said, “We are challenged to consider the lessons of the past few years, and we’re equally challenged to consider what it will take to be a faithful and relevant witness and voice for the gospel at this time in this place.”

PRESBYTERIAN WOMEN OF THE SYNOD OF THE TRINITY

Susan Nesti, the moderator for the Synod’s PW, gave a brief recap of the work this group has done in the past 12 months. This summer, it held its four regional gatherings around the theme of “Café Chocolat.” She also reminded everyone of the PW’s annual Mission Project, which this year is “Welcome Home SIS,” a non-profit, Christ-centered safety net that caters to women who have been impacted by the criminal injustice system and have endured a period of imprisonment. More information on the Synod’s PW group is available on the Synod website by clicking here.

ACKNOWLEDGEMENT OF THE LAND

Wayne Yost spoke about those native to the Synod of the Trinity region, reminding everyone in attendance that indigenous people had occupied the land, known as North America, thousands of years before the first European explorers arrived. In Pennsylvania, there are seven known American Indian tribes known to have settled there, while four others occupied West Virginia.

The offering benefited Presbyterian Disaster Assistance and its recent work with Hurricane Ian and other recent natural disasters. The amount collected to this point is $375. Contributions are still being accepted through this link or QR code on the information slide available here.

Goodies for Our Troops

The ministry highlighted at this year’s Assembly was Goodies for Our Troops, which operates out of the First Presbyterian Church of Wellsboro, PA. Non-perishable items as well as monetary donations were accepted for this ministry. More information on this outreach is available by clicking here. 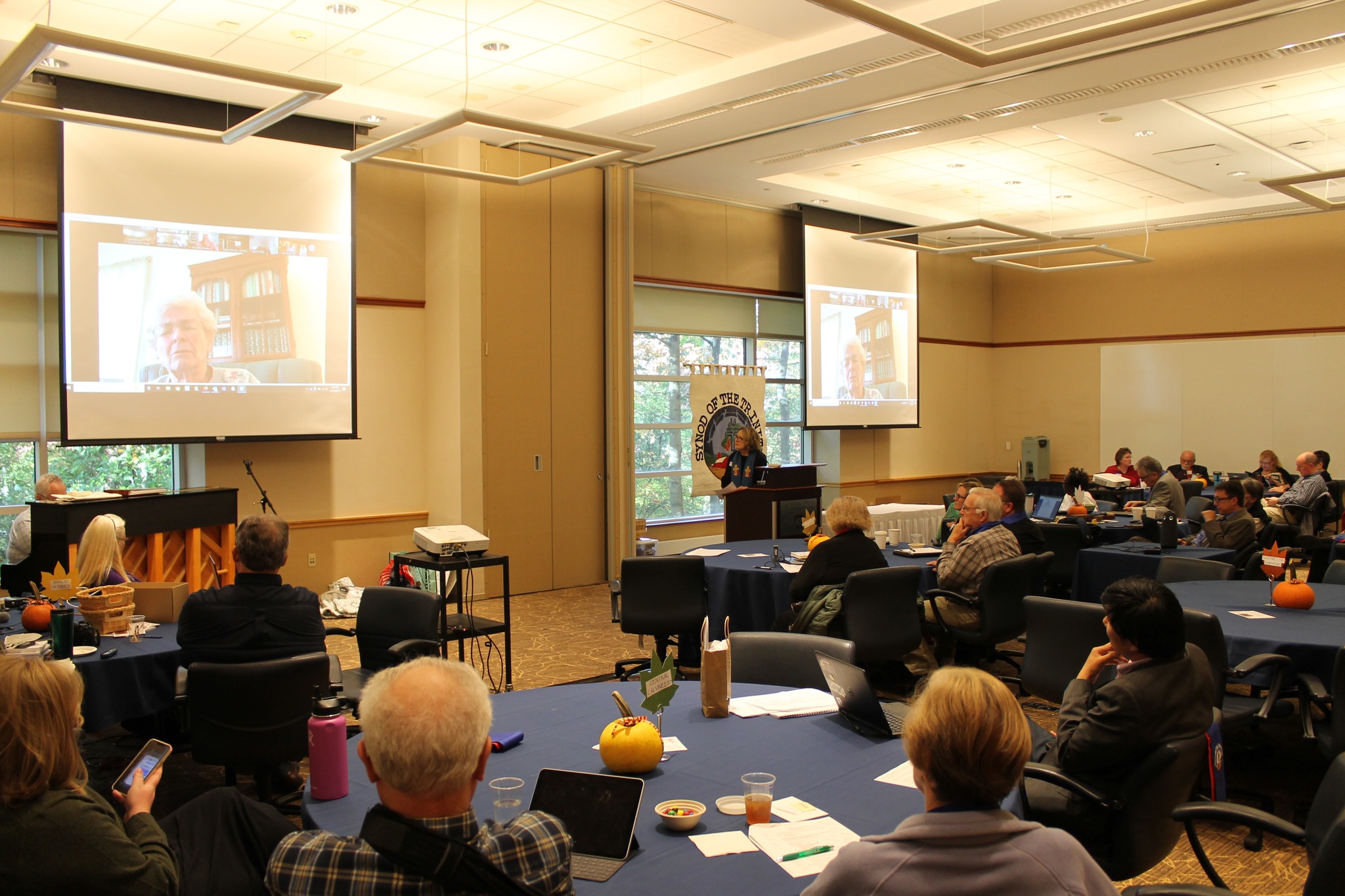