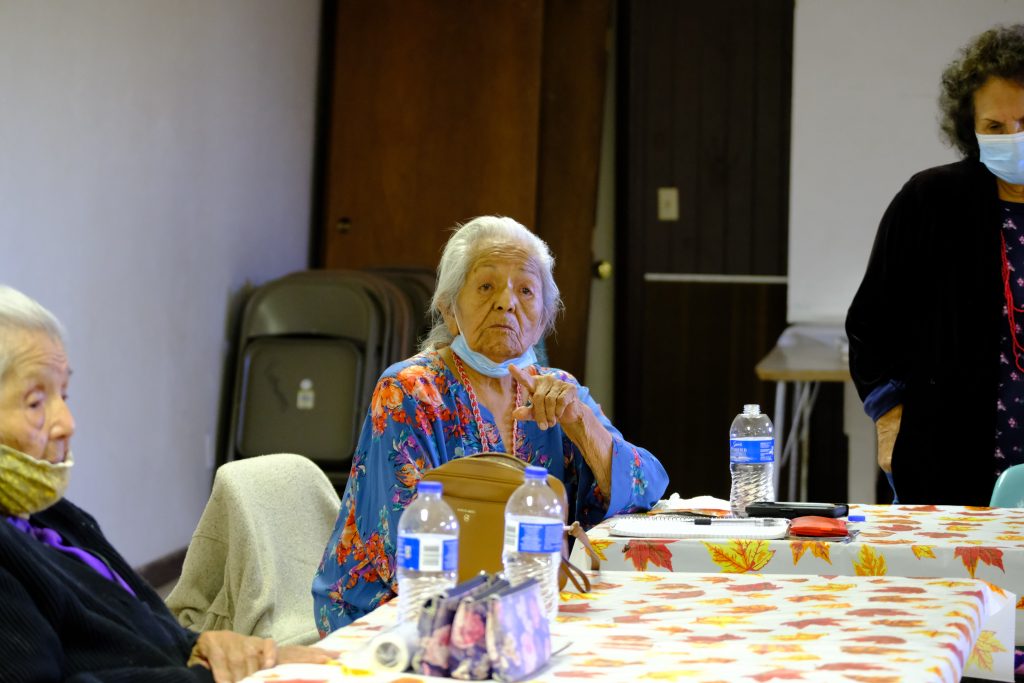 What is our obligation to the promises of our predecessors?

The question has pestered me for over a month.

When Presbyterian missionaries first visited the Navajo Nation over a century ago, they asked for parcels of land to build churches. In exchange, they promised the people that they would provide Christian support “in perpetuity.”

“In perpetuity” is a long time. The missionaries did not anticipate that the PC(USA)’s Board of National Missions would close and that funding for work like theirs would end. They made a promise to last as long as they could imagine. But what happens when circumstances change?

I spent my first 10 years as an ordained pastor among Northwest Coast Natives. If a family failed to fulfill a commitment to the community — often related to saying thanks for help at time of a death — the community would traditionally place an upside-down totem pole in front of the family’s home. The pole signified the presence of an unmet obligation. Only when the obligation was met would the town turn the pole right-side up.

Do we, the PC(USA), have an upside-down totem pole in front of our house?

In October 2022, the Synod of the Southwest sponsored a learning tour for synod executives. They wanted us to see, firsthand, the physical condition of Native PC(USA) churches in their region — and by extension, understand the condition of similar churches throughout the country. 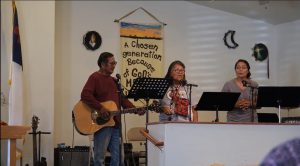 Click photo to hear music from a Native American service.

So, we visited Presbyterians among the Pueblo, the Navajo (Diné) and the Pima/Maricopa. We ate fried bread. We listened to Navajo children singing in the old tongue — and we heard from others whose language is nearly lost.[1] We spent miles watching the land roll by and hearing what it meant to them. We joined together for worship at a camp meeting.

We also met with Native elders. One, a matriarch who went by the nickname “Cookie,” told us of the missionaries’ words. Her voice held no tone of recrimination. Native people are used to broken promises. She left us to draw our own conclusions, as we sat together in a building needing repair.

What of our forebears’ debts do we owe? For how many generations?

The Southwest trip, however, addressed actions of much more recent “forebears” than the missionaries: 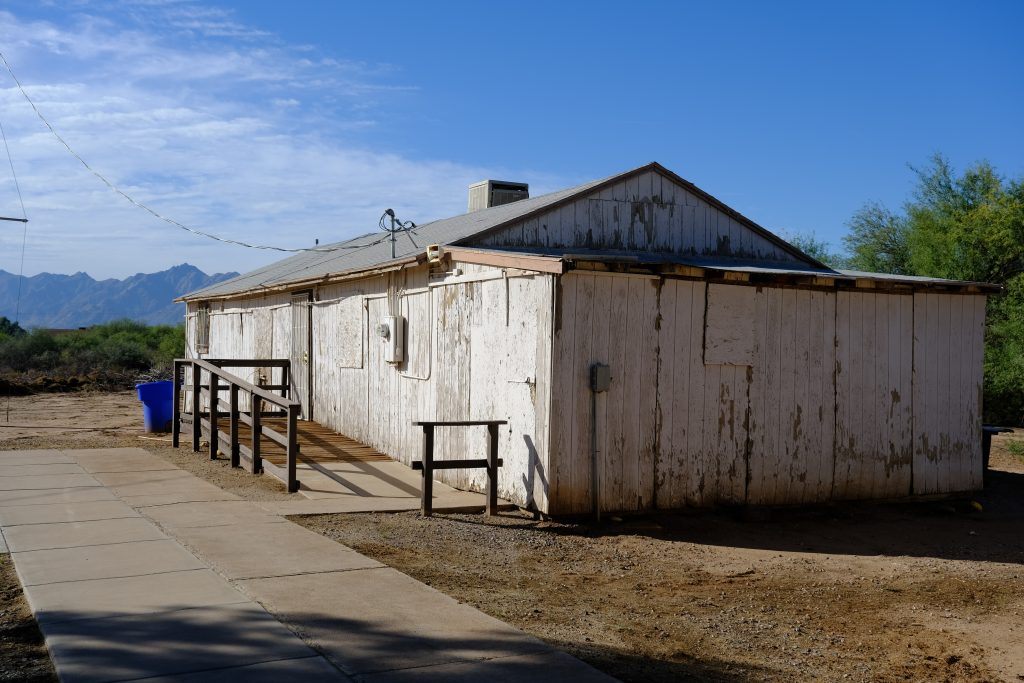 The condition of the buildings we saw varied widely, of course. The Navajo are a sizeable nation in the Southwest. Their economic circumstances vary, just as do those of Presbyterians across Pennsylvania, West Virginia and Ohio. But many buildings showed serious needs.

No similar fund exists for projects in non-Native churches. In this era, presbyteries (and the Synod) prefer to direct money to “ministry initiatives” than “building maintenance” (though some, including our Navajo hosts, would argue that the two overlap).

But many churches in the Synod are in similar states of disrepair. I find myself imagining that small-church folks around here would wonder, “Why them and not us?”[2]

Do we owe something to our Native American churches that we do not owe to others in similar circumstances?

One key difference, of course, is that those who planted congregations in our region founded and built their own churches. Their congregations’ homes began with a mutual internal covenant, not an offer from outsiders.

And, as more recent histories behind this Thanksgiving season[3] remind us, those outsiders did not always deal in good faith. Do we want to keep company with people (and governments) who broke faith in the past — sometimes unwittingly, but sometimes quite intentionally?

During my pastorate in Alaska, our session discovered a century-old mortgage grant from the PC(USA). The congregation had used the money to build its first church. For the most part, it was free money. As long as the church stayed an active congregation, no payments were due, and no interest would accrue.

But we decided we didn’t need to keep it on our books. We wanted to release the money for another church to use. So, the session voted to pay it off.

Starting with that action, something remarkable happened. The congregation’s relationship with money shifted. We stopped seeing ourselves as financially limited. We realized we could make the budget work without outside help. A decades-old history of dependence ended, almost overnight.

Could a faithful choice now — a choice to make good on an old promise — release us into a future we can’t yet imagine? 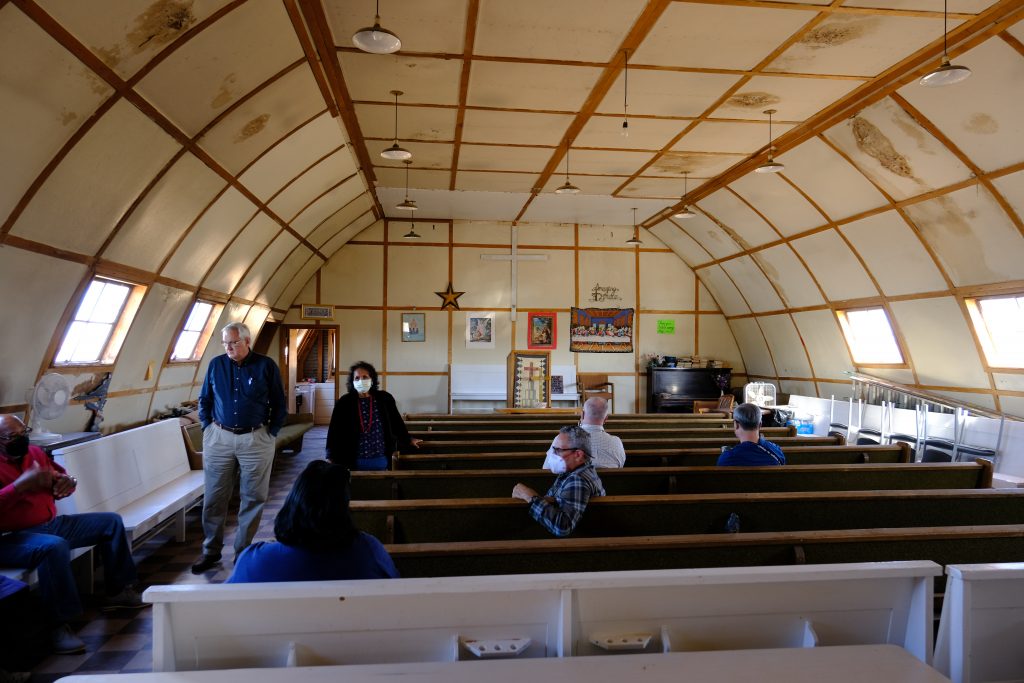 I did not end the Southwest trip convinced that Native American Presbyterians would disappear if wealthy whites failed to rescue them. They will continue to worship, gathering in buildings of various repair. They may disagree among themselves about how to live out their commitment to Christ, but their commitment runs deep. They do not need us to save them.

But could our choice to do right by them, save us?

Like I said before: I wonder. I don’t know, but I wonder.

Somewhere along the Way—

[1] Native Americans are a diverse lot. The extent to which they still know their mother tongue varies widely from one nationality to another and from one generation to another. So does their understanding of the relationship between their historical ways and beliefs (on the one hand) and their adopted Christian faith (on the other). Outsiders engage best when we don’t assume that there is some categorical “Native way” that applies generally — especially when it comes to spirituality.

[2] The question of engaging our own congregations’ building needs is a legitimate one. How are we, as a gathered, connected body of over 1,000 churches across the region, called to help one another? But that question exceeds the scope of this reflection. That column must wait for another day.

[3] November is, of course, the month the United States celebrates Thanksgiving. Interestingly enough, it is also Native American Heritage Month. I expect that’s not a coincidence. 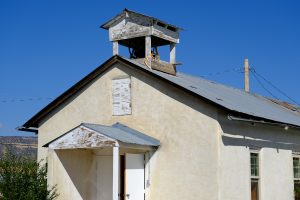