Donegal speaker on Faith and Politics: ‘Let’s not be jerks’ 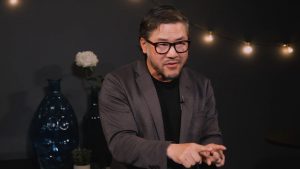 Rev. Eugene Cho speaks on “Faith and Politics” during opening worship at the Presbytery of Donegal’s September online meeting.

“As Christians, we should never, never obsess about politics, but I do want to urge you that politics matter because politics inform policies that influence human people.”

That was part of the message the Rev. Eugene Cho delivered during a recorded sermon that was presented during the Presbytery of Donegal’s online gathering in late September. The presbytery partnered with Paoli Presbyterian Church to host Eugene. The Paoli Church is sharing his message at its worship service on Sunday, Sept. 27. Eugene is the president and CEO of Bread for the World, a prominent non-partisan Christian advocacy organization urging both national and global decision-makers to help end hunger – both in the United States and around the world.

The author of a recently released book titled “Thou Shalt Not Be a Jerk: A Christian’s Guide to Engaging in Politics,” Eugene spoke on the topic of “Faith and Politics.” With a controversial election occurring in the United States on the horizon, he admitted that politics are important because politics influence people and “God cares about people.”

Eugene, who appeared live online with the Presbytery of Donegal for an hour-long question-and-answer session following the playing of his recorded message, recalled that when he was younger that if you were a “good Christian,” your values lined up with the Republican party and that was how you were expected to vote. These days, he said living in Seattle, that same line of thinking is linked to the Democratic party.

View the Rev. Eugene Cho’s message on “Faith and Politics” by clicking here.

“As a result, what ends up happening is that to some, you’re just too conservative,” he said. “To others, you’re too liberal or progressive. I firmly believe – as challenging as it may be in our world today – to be a Christ follower is to be faithful amid tension, to stay engaged, to remain hopeful, to love anyway, to walk with integrity and to bear witness to the love of mercy and grace of Jesus Christ.”

Eugene added that there are three groups of Christians in how they are involved in politics. They are:

And despite which category a person falls under, or which candidate or political party they vote for, Eugene urged compassion toward our neighbors.

“Be careful not to dehumanize those you disagree with,” he said. “In our self-righteousness, we can become the very things we criticize in others. I’m all for contending for convictions, but let’s not be jerks in the process. Be respectful, be mature, be wise – hear this well – the world doesn’t need more jerks for Jesus.”

Stressing the importance of voting, Eugene said “it is an important duty as followers of Jesus to seek to be good citizens here on Earth.” But he encouraged that voting once every four years is not nearly enough.

Regardless of how controversial the political scene is right now, Eugene stressed that Christians need to stay the course.

“Even though it’s incredibly messy and will always be messy until that day that Jesus comes back,” he said, “don’t shy away, don’t look away. Let’s stay engaged, let’s be faithful, let’s have integrity and let’s engage politics, not because it’s the answer or the only answer, but it is one way for us as followers of Jesus in a fallen world to try to love our neighbors and to love God.”