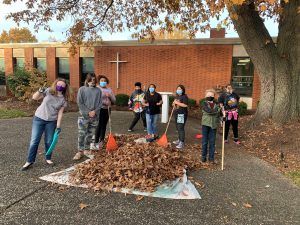 Students from the East End Youth Ministry in Pittsburgh participate in a clean-up day at Beulah Presbyterian Church, something they do to give back to a program that not only assists them but also their families.

An average youth ministry connects with the students and provides resources to help them better succeed in their schools and communities. At the East End Youth Ministry in Pittsburgh, that’s simply not enough. This outreach, which is housed at Beulah Presbyterian Church but is a collaboration of several local congregations, not only checks those boxes but also does its best to bond with the youth’s families to make sure its support goes beyond the teenagers.

“We come alongside families that need help in their homes,” explained Alex Ruzanic, the executive director for East End Youth Ministry. “One thing we discovered is that kids would come to our program, we’d get to know them, and it wasn’t good enough just to care for the kid. We want to know the whole family – the mom, the dad, the grandparents, the other siblings.

“What good is it to have a fun youth mission for an hour and a half if these kids go home to food insecurities and problems in their homes?”

Alex recounted one example where a child in the program lived in a house with no heat, refrigerator or stove, broken windows and barely running water. The East End Youth Ministry came to the aid of this family by installing a new hot water heater, placing plastic around the windows and upgrading the stove, refrigerator, washer and dryer.

“We made sure the house was a warm, dry place for the kids so they would have a place that was safe to go to,” Alex said, adding that general home repairs have quickly become an important part of the ministry. “We have been amazed how many people need this in our community.”

Along those same lines, another part of the outreach is providing some one-on-one budget counseling for families who need it. This helps provide some needed education so that families have a greater chance of financial viability.

“We purposefully ask for their bills,” Alex continued. “We never give them money on purpose. We have a group of folks who work with them to help them with budgeting and figuring out what the problem is. We don’t want to just slap a band-aid on a bigger problem.

“We only have so many resources ourselves. I try to find out where the food banks are in the area, where are the medical places we can send folks for help, what are the places they can get more of these needs filled? We truly try to network with different social organizations in the area as well.” 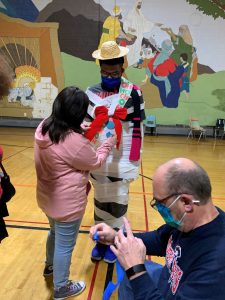 A student is dressed like a snowman during a Christmas Party activity at the East End Youth Ministry in Pittsburgh.

As far as in-house youth gatherings are concerned, the East End Youth Ministry has several different outreaches for kids in grades 6-12, but its most popular is its Wednesday night youth ministry. They are also developing an after-school program on the same day that provides a place to do homework and includes a warm meal for anyone who attends. This then transitions into the evening ministry for which many of the afternoon participants attend.

During the early stages of the pandemic, Beulah Church also opened its doors in the morning to students three days a week to provide internet access and tutoring for online learning.

“They could study and work on their grades with adults who could help them fill in the gaps,” Alex said. “We saw a lot of kids falling behind academically within our community during that time.”

East End Youth Ministry was formed late in 2016 and began executing programs early in 2017. Alex, who has worked in youth ministry and church work for more than 25 years, was noticing a decline in attendance and youth pastors in the region in recent years and came up with an idea to not only benefit Beulah but also other area congregations.

“How can multiple churches impact the community together collectively?” he thought. “Can they hire and do youth mission together? Can a small church that might only have 40 or 50 people contribute a small bit to get the full effect of a full-time youth ministry?”

The answer has been a resounding “yes.” Beulah Church has become the home of the East End Youth Ministry because it has the space (gymnasium, showers, area to do laundry) that the other participating churches didn’t. However, Beulah isn’t doing it alone. It leans on other area Presbyterian churches like Waverly, Edgewood, Hillcrest United and Forest Hills as partners who supply financial and other needed resources.

“It’s a much more community-based ministry with the possibility of becoming its own worshiping entity down the road,” Alex said. “It’s a collection of churches coming together to do youth ministry the way one church used to do it but now they can afford to do it much easier and still have a piece of the pie.”

East End Youth Ministry is in the process of applying for a seed grant to become a part of the Presbyterian Church (U.S.A.)’s 1001 New Worshiping Community program as it looks to become self-sustaining in the near future. The vision for the ministry came out of Beulah Church, which is the sponsoring church for the ministry and is also where Alex is the Director of Youth and Missional Outreach. Among the other entities in the area that provide support, one is a Baptist congregation, and two neighboring school districts also have a hand in the ministry, which makes for a unique collaboration.

“Two of our bigger partners aren’t churches, they’re the school districts,” Alex said. “Typically, there’s been a hard time getting churches connected to public schools, but we discovered because we both care for the kids, the committee wanted to do what’s best. It’s been a really neat two-way street.”

Between 50-60 youths are being impacted by this ministry on a regular basis, with the pandemic stunting the growth of the program the last two years. Alex would like to see that number climb to around 100 going forward. Word is getting out about the many programs that are a part of the East End Youth Ministry, and that was definitely evident during Christmas when it provided more than $3,000 worth of Wal-Mart gift cards to families in collaboration with Beulah’s Mission and Outreach Support Team so that food and presents could be purchased by the families themselves. 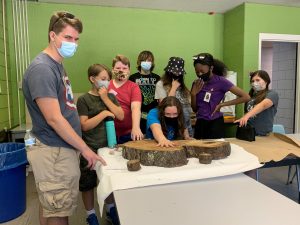 East End Youth Ministry provides interns like Nick Skwarko (left) to work at summer camps, giving students employment experience that they can use when they seek future jobs.

“You’re allowing families to have a Christmas, which they may not have had,” said Alex of the 24 families and 61 children who benefitted from this outreach. “They can have a nice, meal and a happy holiday. We got tremendous response to this effort with families telling us they wouldn’t have had Christmas if we didn’t come alongside them.”

The hope is that this gift-card-giving experience can be repeated at Easter and again during Thanksgiving. The kids certainly appreciate the gesture and in turn give back by helping to rake leaves and do fall cleanup on the Beulah Church property.

“This is a two-way street,” Alex said. “They are part of our community as well.”

That give-and-take stretches beyond yard work. Beulah runs a summer camp program in the area, and some of the youth in the ministry are hired to work in that camp, not only giving them an income but also work experience that will benefit them down the road.

“We’re their first employer,” Alex said. “They learn about how to show up on time, how to dress for a job, how to interview. As a result, they now can go out and get another job. They now become part of the change in our community instead of folks who would just fall through the cracks.”

The leaders of the East End Youth Ministry spent a year studying “lament” and it educated them on how kids are transitioning through life. It has helped provide new momentum for this growing outreach in Pittsburgh.

“What we saw were kids moving from the frustration of not understanding what they were going through to finding hope that only God could give them,” Alex said. “We’re teaching a different perspective and that’s really transformed kids’ lives. Our goal is to see more and more kids who may have fallen through the cracks be successful and find the stability to discover a place where they can serve and contribute to their communities.”