Old Union Church’s mission trips are ‘not about the house’ 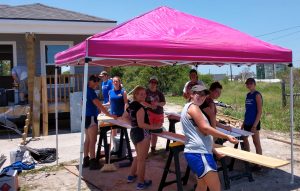 A crew of volunteers from Old Union Presbyterian Church in Mars, PA, works on a house in Corpus Christi, TX, in 2018 that was damaged by a hurricane. It’s just part of a decade of disaster assistance by this congregation and its neighbors.

In 2010, members of Old Union Presbyterian Church in Mars, PA, took a 33-hour Greyhound bus ride to Montana to assist the Fort Kipp Indian Reservation with repairing and rebuilding some of their community’s dilapidated structures. Little did the Rev. Peter de Vries know the lasting effect this trip would have on his congregation.

Twelve years later, Old Union Church – along with some of its neighbors – are continuing what has become an annual tradition of service work in areas of the United States where improvements are needed. Except for that first trip, Old Union has targeted areas in the eastern half of the country that have been hit hard by natural disasters, working with Presbyterian Disaster Assistance (PDA) to find a community to help in its recovery.

It has been a decade-long blessing that is being felt not only by those who need assistance but also by those wielding the hammers, saws and paint brushes.

“The purpose for the trips is for the benefit of those that we are going to work with,” Peter said, “but the benefits come back with us as well. For those who have been on a trip, I can see lives changed. But also for our church, for people who have never been on any of these trips, their understanding of mission and what it means to be God’s church in his world doing God’s work has completely changed our work as well.”

In late June of 2022, the Old Union mission team will be heading to Madisonville, KY, for its 11th trip in the last 13 years. The team did not travel the previous two years due to the coronavirus pandemic but remained active with a “mini mission trip” last year when it helped a local transitional housing ministry the church supports with building repairs.

All the while, the Synod of the Trinity has walked alongside Old Union Church’s disaster response outreaches. Since 2010, the Synod has awarded Old Union a combined 10 Peacemaking and Mission Travel grants totaling close to $10,000 to aid the group in their work. (For information on these and other grants the Synod offers, click here.)

“We’re always grateful for the support we get from our presbytery (Beaver-Butler) and from the Synod to help with the trip,” Peter said.

The greater region is an important part of Old Union Church’s trips. Once church members and other former volunteers are contacted about the trip, registration is opened to those in Beaver-Butler Presbytery and other neighboring churches and mid councils to fill the remaining spots. This year, there are more than a dozen people representing six different congregations signed up for the trip to Kentucky. 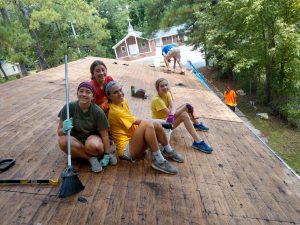 Workers from an Old Union Church volunteer group take a break while repairing a roof in Fayetteville, NC, in 2019.

In Madisonville, the volunteers will be working to rebuild homes following a devastating tornado that hit the area in early December. For Peter, the mission coordinator who is the only person who has been on all 11 trips, it will undoubtedly be a similar scene as the 2011 trip to Joplin, MO, that was also affected by a tornado. That trip was the one that kickstarted the annual outreach by the church even though this stretch of volunteering began a year earlier.

“We didn’t have any thoughts beyond that year (of 2010),” Peter recalled. “That was such a big, ambitious thing for us to think about. After the trip we did some evaluation, what worked and what didn’t work, and that’s when we started to fine tune our plans for it. (The Joplin trip) was an impetus for us to see what we could do to help out. It was our first disaster response trip that we took.”

In Joplin, the group helped repair school buildings to make them ready for the new year. The next year was a little closer to home as the group went northeast to Montoursville, PA, where high water levels had ravished the area. Dealing with flooding continued to be the focus for the Old Union Church group as it for four straight years (2013-16) traveled the towns on the East Coast affected by Hurricane Sandy followed by stops in West Virginia and Corpus Christi, TX. The site of a hurricane was again the focus of the 2019 trip to Fayetteville, NC.

“It’s a very hands-on practical way of helping and helping in a way that adds to the community that you’re going to rather than taking away from it,” Peter said. “There might be other situations where your work team might actually be taking work away work from some of the local businesses. We’re coming in to supplement what the professionals are doing.”

Peter finds the available locations for a mission trip on the PDA website and picks a destination based on need as well as its proximity to Old Union Church. Peter highly recommends groups using PDA if they are looking for a mission opportunity.

“If any church or presbytery is planning on doing a mission trip, if you coordinate with Presbyterian Disaster Assistance, it’s really easy to do,” he said. “You figure out your transportation to get there. PDA, when they certify a host site to receive work teams, they make sure that that church has all of the facilities that you’re gonna need for the week. They do an excellent job of finding local relief or rebuilding organizations to work with. You’re really just plugging yourself into what’s already there.

“One of the things I like about Presbyterian Disaster Assistance is they go to a disaster area after it’s off the headlines. PDA comes in and really helps a lot with the families that don’t have any other means and would otherwise be forgotten.”

While the goal of the trips is to clean up and help rebuild the homes of those affected by these natural disasters, it isn’t the only purpose. And that’s not lost on the volunteers. 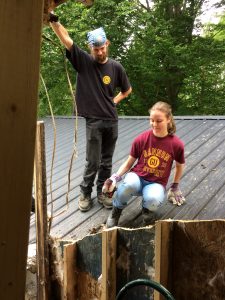 Volunteers of all ages and skill levels are welcomed by the Old Union Church’s disaster relief team, which will take its 11th trip in 2022.

“It’s not about the house,” Peter said, quoting one of the mission team’s slogans. “We’re there to do quality work, but our job is to be there for the people. If you’re given a choice between making sure you hang that piece of drywall or sitting down and having a conversation with a homeowner so they can talk to you about the trauma they went through, we want you to be with the homeowner every single time.

“It helps us to connect with people on a personal level,” Peter continued, adding that some volunteers will keep in contact with those whose homes they helped rebuild. “Most years, we get to know the homeowners very well. There’s years where the homeowners are working side-by-side with us.”

Remarkably, Peter said none of the volunteers, who have ranged in age from their early teens into their 80s, have been seriously injured during the trips. All skill levels are accepted for the groups that consist of a dozen volunteers to as many as 27.

“These trips attract people who might not be part of more traditional church work,” Peter said, “people who vacation Bible school or Bible study groups aren’t something that turn them on. Give them a cordless drill and a level and they’re happy as clams.”

The trips begin on a Sunday following church at Old Union, with a drive to the site in the afternoon followed by five days of work. Wednesdays are normally just a half-day, allowing the afternoon hours for rest and exploring the area.

Aside from the grants Old Union Church receives from the Synod and Beaver-Butler Presbytery, it also does its own fundraising to be able to afford going on the trips. In fact, in 2018 when the group went to Texas for cleanup after Hurricane Harvey, it traveled by airplane to get there. Incredibly, despite the increased travel expenses, the team remained financially stable.

“God is a terrible accountant,” Peter said jokingly. “Every year we put together our budget, and at the end of the week the trip treasurer will look at the money and ask, ‘Why do we have so much money leftover?’ At the end of the Texas trip, we ended up with more money than we had started with. The money showed up. God really does honor it whenever you commit yourself to be doing his work. He’ll make sure the resources are there for you.

Each trip has had its own special moments that make it unique from the rest, but the one common factor is the satisfaction and fulfillment that each of the volunteers takes and keeps with them for the rest of their lives.