At First Church of Pittsburgh, war in Ukraine is ‘very personal’ 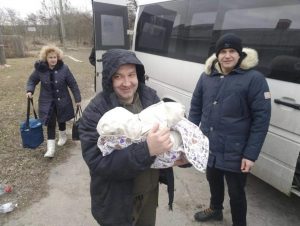 The Bread of Life church in Ukraine, a sister church of the First Presbyterian Church in Pittsburgh, has been helping to move people to safety amid a war in their home country.

In 2018, three members of the First Presbyterian Church of Pittsburgh traveled to Ukraine with longtime mission partner Rich Correll. The goal was to connect the First Church with a Ukrainian congregation so First Church could prayerfully and financially support that church. Little did the Pittsburgh congregation know just how important this relationship would become four years later.

With Russian President Vladimir Putin’s decision to invade Russia in late February, Ukrainian cities and communities have been under siege ever since, and the stories and images continue to dominate headlines and evening news reports. For Judy Shipley, the chair of the Mission Committee at First Church, the daily updates she’s receiving through Facebook Messenger are a lot more personal.

“I get updates on their day and what they need in terms of prayer support,” she said. “One day, the women baked 100 loaves of bread for the soldiers. Another time, the brothers who live in group homes that are a part of the church, they went to sign up and get weapons. Another day they were making Molotov cocktails. It’s been, incrementally, this building story of how to respond, but then it just became impossible with all of the shelling and bombardment.”

To date, the property of the church that First Church supports in Ukraine, called Bread of Life, has not been damaged. The church building is now a shelter for many people from the community and the church continues to bake bread daily.

Bread of Life is a church plant in the town of Kozelets near Kyiv that is an evangelical outreach to people who are in recovery from substance abuse. Bread of Life has five group homes (four for men, one for women) where the residents can go through rehabilitation all the while, if they choose, becoming disciples and members of the church. In the five years Bread of Life has been in existence, it has also spawned another church in Chernihiv, a pastor with which First Church also has a relationship.

“We have supported Bread of Life very strongly through yearly support in our mission budget,” Judy said. “Through our yearly giving over the last 3-4 years, we’ve helped them build a worship center and we’ve helped them with various needs that they have, especially through covid.”

Due to a poor economy, very few of the residents of the group homes are able to work, so Bread of Life takes responsibility to support them with food and housing, with assistance from others like First Church. Judy also provided some Bible training for Bread of Life by video conferencing program Zoom, creating an even tighter bond between First Church and its Ukrainian brothers and sisters.

“It’s not like they don’t have good Bible teachers over there,” Judy said. “I think this is their way of wanting to draw us closer together in connection.”

Judy is certainly feeling the emotions of this situation these days as she continues to get daily updates from the Bread of Life pastors and wives. 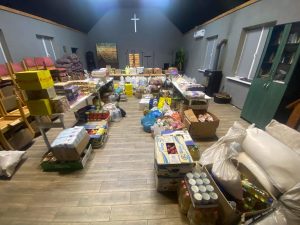 Supplies that arrive at Bread of Life church in Ukraine wait for distribution.

“It’s horrifying,” she said bluntly. “I keep thinking nobody wants this war on either side except for Putin. I kind of go on autopilot and just focus on what I can do, which is just keep up the communication with the people I have. It just helps to know specifically how to pray. Today, we are praying for more vehicles, more fuel, the ability to feed large groups of people who have been displaced.

“I try to stay away from deep reading into the headlines in the news stories. I glance at the headlines, but I mainly focus on the messages I’m receiving, how to pray and how to encourage others to pray for what’s going on.”

Right after the war began, Judy requested that the church hold a prayer for Ukraine following a Sunday morning worship service. This act led to greater awareness for the situation, and the elders of the church agreed to hold an offering for Ukraine. More than $15,000 has been collected so far, and $10,000 of it has been transferred to Church Planters Training International, First Church’s mission partner for more than 30 years.

“The pastors we are supporting are using the funds in two ways,” Judy explained. “They are acquiring vehicles and fuel to evacuate people from the war zone around Kyiv. One of my pastor friends, Rev. Bogdan Kulitskiy, and some others left their town (Kozelets) and moved as many as they could to the south, in the Chernivtsi region not far from the Romanian border. They are organizing with local churches there to buy food, water and medical supplies to drive back north to resupply civilians, armed resistance and soldiers.

“When the vans are unloaded, they make a return trip bringing out as many women and children as they can. They return to Chernivtsi for a meal, rest and resettlement – not sure where they go. Pastor Bogdan has done this round trip three times and is organizing more. These are very dangerous undertakings. The roads are increasingly impassable. Yesterday, they were attempting to deliver one more box of food. They stopped when they saw a burning car on the road. They turned around and just narrowly missed being fired upon by a row of Russian tanks. I think every new trip for them will be more and more dangerous. But as Pastor Bogdan says, ‘I will serve these people.’”

Having been to Ukraine and now hearing these accounts and seeing the images on television certainly makes the war more personal for Judy and her congregation.

“I’m monitoring things every day,” she said. “Once you know somebody there, the invitation is clear, you need to respond however you can. For us it’s very personal. We care for these people, we want to see them safe, and we want them to hopefully someday be free again to pick up their ministry. My prayer is that they will have a chance to start over, to restore and rebuild after devastation and ruin.” 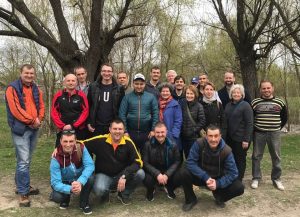 In 2018, several members of the First Presbyterian Church of Pittsburgh traveled to Ukraine to connect with worship leaders there. From that visit, First Church began a relationship with Bread of Life church.