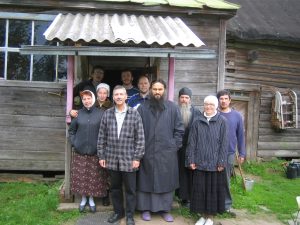 Rev. Dr. John Burgess lived in Russia on three separate occasions while on sabbatical at Pittsburgh Theological Seminary. The relationships he forged during those stays have made it hard for him to watch what is happening there.

It’s tough seeing the images of the war in Ukraine on the nightly news these days. They’re even harder to stomach for someone like the Rev. Dr. John Burgess, who has a personal connection to both Ukraine and Russia through work that he has done at Pittsburgh Theological Seminary.

“Seeing the pictures, first the buildup on the border and now the attacks in Ukraine, there are times when I cry,” John said. “It’s so sad for me. It’s sad, too, because this has been a part of my life for 20 years and I may never be able to go back to Russia. It really hits me personally. It’s friends but it’s also my own investment, my own love and care for Christians in that part of the world. Now there’s this feeling that we’re separated. We have a hard time knowing how to talk to each other.”

John, a Presbyterian minister who is a member of Pittsburgh Presbytery, is a professor of systematic theology at Pittsburgh Seminary, teaching basic Christian doctrine and how it is interpreted today. While John has visited Ukraine as recently as 2016, it’s his three lengthy sabbaticals in the Russian cities of St. Petersburg, Moscow and Belgorod that he cherishes fondly. Belgorod is a town near the Ukraine border that was used to station Russian troops prior to the invasion. Seeing places John had visited and grew to love now being the starting line for a war has been upsetting to him.

“I was shocked when the invasion took place,” John said. “I just could not believe it. Even in Russia nobody thought this was really going to happen. I listened to (Russian) President (Vladimir) Putin’s address to the nation. It was so full of grievances and resentments. That was hard to hear.

“I could really picture quite starkly where the invasion began from the east. It was very emotional for me. It has really shaken me.”

John is keeping in touch with some of the people he met during his trips, and some of the messages being sent back are very disheartening. One of his friends who lives near Belgorod has relayed that his wife and daughter were in Ukraine at the time the invasion began. They had to hide in a basement for nearly a week amid bombing in their city.

“This hits me really close to home,” John said, “because I know this man so well. He’s been a good friend to me and now to know how dramatically this affects him personally.”

On the other side, John also has friends who support Russia’s actions, and that also presents a difficult situation for him.

“It’s hard to know how to talk to them when they are so completely in favor of what the president has done,” he said.

There is also a divide in the church occurring in Russia and Ukraine. There had been only one Orthodox church during the days of the Soviet Union, but with the fall of communism in 1991 and Ukraine becoming independent, some Ukrainians established their own church. This has also caused a split among those who remained with the Moscow church and those who went the new route. 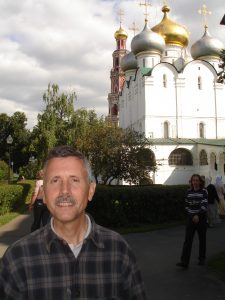 Rev. Dr. John Burgess is sadden by the act of war by Russian President Vladimir Putin and wonders if he’ll ever be able to travel back to that land that he loves so much again.

Studying the Russian church was the focus of John’s first sabbatical in St. Petersburg in 2004-05, an experience that was partially funded by a Synod of the Trinity grant. It was an eye-opening experience.

“We were amazed at how many churches were being built and restored,” he said. “There was this resurgence of interest in Orthodoxy, even though religion had been repressed under the Soviet Union during the communist times. It seemed as though Orthodoxy, which has always been the dominant religion in Russia, was helping people to have a sense of their identity – what made them distinctive as Russians, what gave them a sense of their historical roots. We found that even though a lot of people were not active in church life they still thought of themselves as Orthodox.”

John’s discoveries in Russia have led him to not only becoming a published author on the Russian church but also teaching a class at Pittsburgh Seminary that introduces Protestants to the Orthodox Christian religion. He also teaches a class in Eastern Christian Studies as part of the seminary’s Doctor of Ministry degree. It has given him a good perspective on the situation occurring in Ukraine.

“There’s so many factors that go into why a war finally breaks out,” John said. “In many ways, this is a conflict about the identity of Ukraine.”

John went on to explain that Russians and Ukrainians have many historic ties: even though they have a different language and traditions, they are both Eastern Slavic, they share a common Orthodox religion and culture and share the same icons. During the days of the Soviet Union, these two countries were connected and fought together in World War II. However, Ukraine does have different regions, with the western parts being more influenced by neighbors Poland and Hungary while eastern Ukraine has stronger ties to its neighbor, Russia.

“Ukraine itself is still evolving into what it means to be Ukrainian,” John said. “For some Ukrainians, that means being close to Russia and for other Ukrainians it means being separate from Russia.”

President Putin, John said, felt the need for Russia to overtake Ukraine when Ukraine began considering joining the North Atlantic Treaty Organization (NATO), which is a 30-country military alliance designed to resolve issues, build trust and avoid conflict. How long the war will last is anyone’s guess, but for John it has already been too long.

“From my point of view,” he said, “and a lot of Ukrainians wouldn’t agree with this, I think the best scenario would be for President Zelenskyy in Ukraine and President Putin in Russia to be able to come to some compromise where Ukraine retains its territorial integrity but becomes a neutral state and does not aspire to NATO membership.

“In war, everyone is a loser,” he added. “Russia will likely prevail. That means that many Ukrainians are already fleeing the country. Other Ukrainians who have been opposed to Russia will fear for their lives or their careers.

“Western Europe and the United States will feel the effects. The price of oil has shot way up. We’re going to have much more dramatic inflation. We’re going to be living with this very tense relationship with a country that has nuclear weapons just as we do. It saddens me that war makes distrust, divisions and hatred even deeper.

“I nevertheless believe that Russians and Ukrainians will someday live in peace again. And I hope that their churches will lead the way.”