Edmondsons getting most out of six-month call to Rwanda

Boyd Edmondson was at a crossroads. He had been called to be a preacher, but a tragic event involving his family made him question what exactly his mission in life was.

As it turned out, Edmondson decided to fulfill his commitment to attend a mission trip to Rwanda soon after the tragedy, and it ended up being a blessing, not only for him to be reaffirmed in what he had been called to do, but also to that area in central Africa where he would later sign up for a six-month stay. On top of that, Edmondson’s calling has also helped revitalize the Presbytery of Kiskiminetas, injecting new enthusiasm into that western Pennsylvania team of churches. 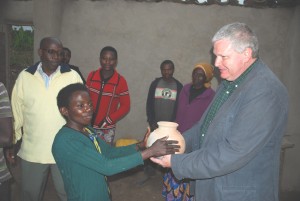 Boyd Edmondson receives a calabash pot from a family from the Nyarubuye Mpushi Chapel, which received a cow through a partnership with the Presbytery of Kiskiminetas. The first born cow will be given to another needy family from the congregation.

If there has ever been anything positive taken from an unthinkable situation, it happened in 2006, shortly after the Presbytery of Kiskiminetas entered into a partnership with the Gitarama region of Rwanda. Edmondson was signed up with eight other people to make the long trip to Africa in September of that year, which coincidentally was occurring a month after his 17-year-old daughter, Katie, was taking a similar trip to Hungary with a family friend whose aunt and uncle were serving as missionaries there.

“Katie and I often talked about our twin mission trips,” Edmondson recalled. “We planned to use the same suitcase.”

In late August, a week after Katie had returned from Hungary, she was the driver in a one-vehicle accident that took her life, a crash that also included Katie’s brother, Matthew, who survived.

“I was devastated by this death,” Edmondson said. “The team of people with whom I was to travel to Rwanda attended Katie’s funeral. Wayne Yost, who was the executive presbyter, told me I didn’t have to fulfill my obligation to go to Rwanda. Still I was haunted by the thought that Katie would want me to go. It was like I had an obligation to her to get that same suitcase she had taken to Hungary to Rwanda.

“I also kept coming back to the strong sense of calling I had felt to be part of this trip. So I went, with (wife) Shirley’s blessing, of course. I had taken a personal leave of absence from my job as the pastor of the Marienville and Sigel Presbyterian churches. I honestly didn’t know when or even if I would ever return to the pulpit. I didn’t feel I could ever proclaim the love and goodness of God again. As a pastor, I had witnessed so many miracles and didn’t understand why God didn’t somehow spare the life of my daughter. So I first came to Rwanda with a broken heart and faith.”

With many questions floating around in his head, Edmondson took off for Rwanda not knowing what was in store for him. Still heavily grieving, he soon found out that he was not alone. He met a woman, Gertrude Mupfasoni, a widow and mother who had been through the Rwandan genocide of 1994 when between 500,000 and 1 million Rwandans were killed based solely on their ethnicity. She had taken in surviving orphans as part of her family, and when she learned of Edmondson’s loss, she quickly took him aside and offered stern words of encouragement.

“Gertrude gave me the hope of building a new life out of our devastation, not the same life, but not a life that was destined only for sadness,” he said. “She said something like, ‘You have to find the strength to go on with your life. You have to make the best life possible for yourself and your family.  We owe this to our departed loved ones. This is what they would want for us.’ Others had tried to say essentially the same thing to me, but somehow it got through coming from someone who had watched as her family members were murdered before her eyes in a most grisly fashion.” 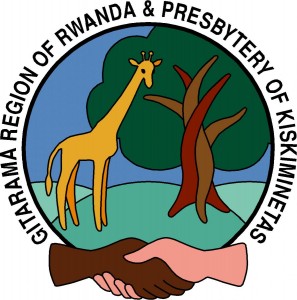 A second experience further helped Edmondson get his life back on track. While in Rwanda, he stayed with the family of Rev. Eugene Rubanda, who at the time was the president of the Gitarama region. Edmondson had not spoken of the tragedy he was dealing with to the Rwandans but eventually opened up during a meal and expressed the grief with which he was carrying.

“I launched into my story, knowing that I would have to wait for Eugene to translate what I had said for (wife) Editha, who didn’t speak any English,” Edmondson said. “As Eugene translated for Editha, I watched (as) a light of recognition went on within her. She spoke very furiously in Kinyarwanda. Eugene translated what she had said to me: ‘Editha has just reminded me that God showed us our guest would be grief stricken.  When we had finished preparing the room where you are staying, we knelt down beside the bed to pray for our guest. We didn’t know your name at the time, or even whether we would be hosting a male or a female.

“‘As we prayed, we both felt a heavy pressing sensation on our hearts and took that as a sign that our guest would be dealing with heavy grief. We have been praying for you ever since.’ Later that night, as I processed this information, I realized that although God had not spared my daughter’s life, that God had prepared the way for me. The whole calling to go to Rwanda had been part of God’s plan to heal my grief. Somehow in the middle of the night in my tiny room in Rwanda my faith came back to me. I found the strength I needed to preach in the Gitarama church the last Sunday before we left, where I shared my story. When I returned home, I was able to resume my pastoral duties.” 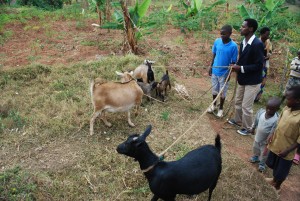 These goats were given through the Kiski-Rwanda partnership to members of the Kabuga Chapel. Two are pregnant, and the first born is given to another needy family in the congregation.

Even though a return trip was not planned for 2007, Edmondson initiated one anyway so he could go back to the people who had helped him through his crisis. Subsequent trips were also made to Rwanda, but because a priority was made for people to take the trips who had not gone before, he did not return. Until this year. In January, a decision was made to send someone to Rwanda for an extended time in order to help with, among other things, a breakdown in communication.

Edmondson and his wife committed to go for a six-month period from mid-June to mid-December, but before that happened there were funding questions and their current employers had to sign off on it, too. Boyd got the OK from his two congregations to make the trip, and the Presbytery of Kiskiminetas agreed to fund the trip, with the help of a Peacemaking Grant from the Synod of the Trinity, and cover the costs for Marienville and Sigel Presbyterian churches to find a replacement pastor. As for Shirley, it was a struggle, but the school district where she is a guidance counselor eventually agreed to her leave of absence and promised to hold her job until she returned.

Currently living in Gitarama (a medium-sized city, according to Edmondson), which is near the equator but cooler than one might think because the elevation is one mile above sea level, the Edmondsons are living in a “very upscale home” but one that is a “very average home” by American standards. The trip has coincided with the Presbyterian Church of Rwanda’s decision to restructure, turning 17 regions into seven presbyteries and creating new leadership.

When the Edmondsons are not teaching English and learning the Rwandan language of Kinyarwanda, they are visiting churches that are the sister congregations to those in the Presbytery of Kiskiminetas. Thirty-six churches in Kiski have connections to and provide support for “chapels” in Rwanda.

“We sensed that our members would almost like a person-to-person partnership if that could be ever be managed,” explained Mark Phoebus, the moderator for the Kiski-Rwanda Partnership Committee. “But that really is not something that we thought was manageable. So the next best thing was to do a congregation-to-congregation. One congregation takes ownership in the partnership with another congregation, each one addressing the needs of the other. Spiritually is where the foundation started, but once you get farther into the needs of the people, you also find that there’s a little bit of economics that play into the needs of the people, so we responded in that way, too.” 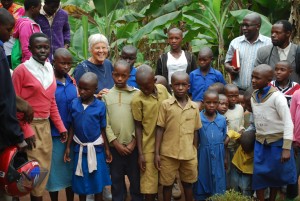 Betty Grunstra poses with the children from her church’s partner church, Buha Chapel, during a mission trip to Rwanda earlier this year.

The Edmondsons are also making sure that the money being sent to Rwanda is being used as intended, funds that go to buy things such as livestock and transportation, like scooters that are used by pastors to travel from congregation to congregation. Since 2006, the Presbytery of Kiskiminetas has raised over $524,000 for the church partnerships, special projects and mission trips to Rwanda.

Furthermore, Kiski has helped bring fresh water and water filtration kits to Rwanda. With women and children needing to walk several miles per day to collect water, and with more than half of the population using contaminated water, there was a need during one mission trip to bring clean water to the area. The Presbytery of Kiskiminetas covered nearly $26,000 of the $34,500 project that brought water to 1,650 families and schools in and around the town of Kabadaha, near Gitarama.

Phoebus traveled to Rwanda in August as part of a three-person team that included Matthew Edmondson and Betty Grunstra, who has now been to Rwanda for all five mission trips. While there, Phoebus visited several of the partner churches in Rwanda, including the one associated with his church, Calvary Presbyterian of Indiana, PA. He helped his church raise over $25,000 to purchase cows for member families of the sister congregation, to begin to build a church and to help fund the trip, eclipsing the $17,600 that was the target amount. 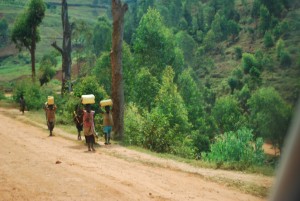 Children carry water home for the day, a ritual that the Presbytery of Kiskiminetas is trying to end through water wells and purification systems.

The joint efforts have obviously been beneficial to the people of Rwanda but have also created renewed spirit among the Presbytery of Kiskiminetas and its congregations.

“It has united our presbytery in a common mission,” Edmondson said. “It has at times helped us to get beyond the controversial issues that seem to be tearing apart our denomination. I think it has kept our focus where it should be – on serving the Lord and reaching out to others in concern for them. Shirley and I truly feel like we have the whole presbytery behind us, and that we are not here all on our own.”

Phoebus agreed that Kiski has definitely benefited from its relationship with Rwanda.

“I think mission work is exciting,” Phoebus said. “When you have the opportunity to help people that are not as fortunate as you are, to lift them up and to see the progress and to see what’s happening over there how we are helping people is exciting. It’s a way that you know what you’re doing, who you’re helping and that you realize that you’re accomplishing something. … It’s not only revitalizing to a presbytery, it’s revitalizing to churches.”

Note: For updates on the Edmondsons’ mission trip to Rwanda, you can see photos here, read their blog or follow them on Facebook. A history of the relationship between the Presbytery of Kiskiminetas and Rwanda can be found here.