Sometimes it takes a terrible thing to bring about something good. Ever since the attacks of Sept. 11, 2001, the American people have gone out of their way to honor first responders and show appreciation toward the servicemen and servicewomen who have dedicated their lives for their country’s safety and freedom.

That same year a few months earlier, flooding caused devastation to parts of West Virginia. Heavy rain hit the southern portion of the state the hardest from mid-May to mid-June, then in July more storms caused mudslides and more flooding to the same area that had not yet recovered from the fierce weather a month earlier. 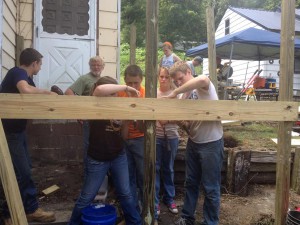 Students from the St. John’s United Church of Christ in Clear Spring, MD, build a wheelchair ramp near Montgomery, WV, just one of the projects being done regularly with the assistance of the West Virginia Ministry of Advocacy and Workcamps.

“West Virginia had back-to-back floods, and they looked in the file to see what the disaster response was and found out that the file was empty,” the Rev.  Joan Stewart recalled.

It was right then and there that the West Virginia Ministry of Advocacy and Workcamps was born. Even though it is separate from the Presbytery of West Virginia, the non-profit West Virginia MAW works with the presbytery as a long-term recovery response team. But it’s for more than just disasters. It also provides needed mission work for the state of West Virginia, most notably the war against poverty.

“The work that we do is home repairs that deal with other disasters such as handicap, illness, unemployment, age, those kinds of disasters that exacerbate poverty,” Stewart said. “We’re able to give folks a hand up, hopefully even some mitigation against future natural disasters.”

The range of work, which is done only in the parts of the state that are in the Presbytery of West Virginia, also stretches to volunteering at homeless shelters, working with Habitat for Humanity and even things like walking dogs for the Humane Society. That collaboration with organizations is part of the job Stewart does on a daily basis as the executive director for West Virginia MAW, a post she has held since 2006.

Stewart, who has been involved with West Virginia MAW for the past 11 years, gets her work force partly from nine site supervisors who she regularly coordinates with. These supervisors are in charge of the various groups that volunteer for the work, a pool that numbers 75 teams per year that come from churches and colleges from around the country. Even Notre Dame brings in two groups per year as part of a class called “Appalachia.” 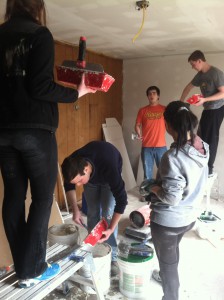 Students from Penn State-Lehigh Valley and Notre Dame combined for a spring break mission in Point Pleasant, WV, in March. They are pictured putting sheet rock on the ceiling of a home for a family whose house had burned.

“What sets us apart from a lot of mission opportunities is that we have site supervisors that work with the teams,” Stewart said. “So if you’ve got groups that don’t have any skills or they’re young and just need someone to guide and to learn or you’ve got a lot of willing people that don’t really know what they’re doing but take direction well, we’ve got site supervisors that lead and teach or get out of the way if you’ve got some really skilled folks.”

Most of the volunteering occurs from March to November, and Stewart said there are church groups available at a moment’s notice to help out in a crisis. In most cases, the groups (with sizes of 15-30 people) sign up to do local mission work, but if something major happens in the way of a disaster, the groups could be pulled in to help with a more pressing problem.

This year, there have been some flooding issues West Virginia MAW tended to as well as some roofing projects, trying to get people safe and dry before the winter hits. And when there’s snow, that creates a new set of problems that usually aren’t dealt with until early March when the snow and mud clear.

As for the future, Stewart wants to keep doing more of the same good will but hopefully tweak the way things look and are being done.

“One thing that we don’t want to do is what’s called ‘toxic charity’ and just be a place of ‘hand out,’” she said. “We want to be able to offer folks a ‘hands up.’ We want to be able to help folks go beyond just waiting for somebody to give them something. And that’s a dilemma sometimes.”

While working, the groups don’t stay on-site or in a hotel. They get the full West Virginia experience by bunking up in local churches that have created room for the workers in their own buildings.

“They stay in churches that have taken available space and converted it into dormitory space,” Stewart said, adding that churches have turned Sunday School rooms into places where bunk beds and cots can be set up for the workers.

The churches also open up their fully-equipped kitchens to the groups and have showers built for the teams. Some congregations will even cook a meal for the mission team it is housing, and in cases where multiple churches are involved in a project, the team will rotate its eating schedule between the congregations. 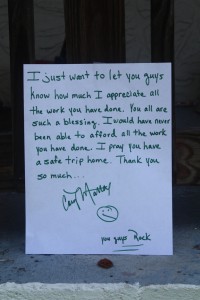 This is a thank-you note from a family written to the team from St. John’s UCC of Clear Spring, MD, following the group’s work in West Virginia.

That hospitality isn’t lost on the workers, either.

“A recurring theme in West Virginia was the unceasing hospitality,” said volunteer Sarah Birtch of the Clarendon Hills (Ill.) Presbyterian Church who was working in Colcord, WV. “I was surrounded by it wherever I went and whomever I was with. As soon as we arrived on Saturday night, our host, Gary (Anderson, member/clerk of session of the First Presbyterian Church in Colcord), was there to welcome us and show us around the building in which we stayed. We attended the church service the next morning, and the congregation showed their hospitality by including us in their service and treating us like old friends, even if it was our first time setting foot in West Virginia.

“This kindness was especially evident in the people whose houses that we worked on. There are many stories of the homeowners bringing out food and drinks for us, like Mr. Compton insisting that we take an entire case of Pepsi to drink while building his porch. … After looking back on this stepping-stone through my faith journey, I have come to the conclusion that loving God is loving others, whether it’s giving a smile, building a porch or just listening to a story or two. What you give is always enough, for it’s not how much you give, but how much it means to you.”

The funding for the work and the projects comes from several different places, like grants. The groups are requested to pay $250 per person to volunteer, but the West Virginia MAW also gets other financial aid, like the $12,240 it is receiving from the Synod of the Trinity this year. All told, the synod has given nearly $200,000 to the cause since the program’s inception.

The church and ministry are the backbones to what Stewart, her site managers and the volunteer groups are accomplishing by being out in the community doing “God’s will.” The West Virginia MAW has T-shirts that read “I am loved, therefor I serve,” which says it all. 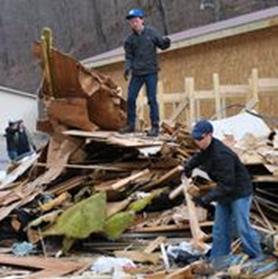 Boys from Holy Ghost Prep School in Bensalem, PA, are “deconstructing” a home damaged by flooding near Gilbert, WV.

“It’s an opportunity for us to take mission beyond the walls of the church, do hands on and build a relationship with the families that we serve,” Stewart said. “It’s not just about driving the nails. It’s also about spending time with the families, getting to know them, getting to know their story. People have a tendency to make judgments about ‘those people’ and not really know why they are where they may be in life. So this gives people an opportunity to get to know folks.”

The experience that West Virginia MAW has on people’s lives, both the ones that the work is being done for as well as the workers themselves, is unmeasurable.

“Working throughout the week, tired and in the hot weather, really brought me closer to God,” said Bryan Loebig, also of Clarendon Hills Presbyterian. “ It would have been easy to quit and stop building, but the encouragement of the Lord showed me what my true purpose was in being in West Virginia: to love and serve God and others. However, this purpose does not only pertain to my time in West Virginia, but rather to how I should spend my time the rest of my life.”