Rev. Randy Bush spends a moment with actor Vin Diesel during the recent filming of “The Last Witch Hunter” at East Liberty Presbyterian Church in Pittsburgh.

Vin Diesel sat in the pews for several days at East Liberty Presbyterian Church and also prayed with the Rev. Dr. Randy Bush. Elijah Wood was milling around the hallways and sanctuary there, too, in late September.

And they weren’t alone. They brought many friends and co-workers with them to the Pittsburgh church and left an indelible mark on the East Liberty PC worshipers and staff for the two weeks they were there.

While Diesel and Wood undoubtedly received some spiritual enlightening during their time at East Liberty, the main reason the famed movie actors were there was to film scenes for a movie they are starring in called “The Last Witch Hunter.” The crew was at East Liberty for a total of two weeks but only spent about nine days in actual production there, leaving Sundays open, for instance, so that East Liberty could still hold its worship services.

Diesel (of the Fast and the Furious series) and Wood (Lord of the Rings fame) are joined as co-stars in the film by Golden Globe and Academy Award winner Michael Caine and Rose Leslie (Game of Thrones). Filming is expected to last until December – the taping at East Liberty finished in late September – with a release date unannounced.

It’s the third movie that has chosen East Liberty PC for a location shoot, with the last being the 2010 film “Shelter.” The husband of one of East Liberty’s members is a site location scout for movies and had a hand in getting previous movies shot there, but that wasn’t the case this time. 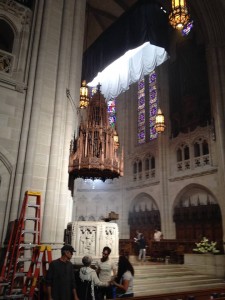 The cast and crew made themselves at home at East Liberty PC during the two-week filming.

“Pittsburgh’s got a tax credit so that when movie companies choose to film in Pittsburgh, they get a tax break,” Bush explained. “That makes Pittsburgh a real popular destination. … They needed a large, Gothic cathedral. They used First Presbyterian Church in downtown Pittsburgh for external shots … then they came to us as if we were the inside of that church.”

It wasn’t that the movie crew didn’t like the outside of East Liberty’s building, Bush added, but the script called for a car scene with an alley next to the church and found First Presbyterian Church to be more suitable for that part of the filming.

Bush said the movie crew mostly used the sanctuary and a chapel off to the side of the sanctuary for filming. And sometimes the church’s music library room in the balcony was transformed into an office for overhead shots.

“The ceiling’s almost 75 feet high, and when the light comes streaming in, it’s a very dramatic setting,” Bush said, explaining his thoughts on why the movie company chose East Liberty to do its filming.

The overall space of the church was its biggest asset, allowing for scenes to have a more dramatic affect. One scene calls for a tree to shoot up through the floor, which will be done with computer graphics but was made possible due to East Liberty’s vastness.

The movie’s setting is New York City with the synopsis surrounding a witch hunter who is trying to stop a group of witches who are trying to destroy mankind with a terrible epidemic. About 4-5 scenes were actually filmed at East Liberty, and Bush thinks those scenes won’t take up more than a couple of minutes of the movie. Caine was not part of the shooting at East Liberty — but his dummy was in a casket in one of the scenes.

Bush was able to preview only the portions of the script that were filmed in his church before granting the movie crew access. With witches being the subject, Bush had to make sure the film didn’t go beyond the boundaries of the church and its beliefs. 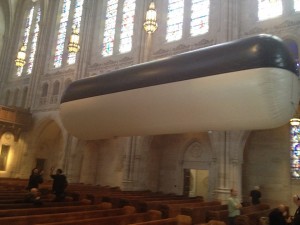 This lighting balloon enabled the movie producers to generate more light in the 75-foot high sanctuary at East Liberty.

“We asked to see the script so we know what they’re saying and what they’re doing when they’re inside our building,” Bush said. “You have to give them a little bit of grace that they’re making a move that’s on a particular theme and if they’re cussing or doing something else that you might not agree to, that’s part of the process.

“You walk a line and decide that it looked to be straightforward enough for what they were doing with our place that it was OK to approve them.”

In fact, a couple of East Liberty’s doors needed some minor hinge repairs in order to make them work better, so the church ended up getting some free repairs done by the movie company in the process.

The staff at East Liberty went about their business as the shooting was going on and was welcome to partake of the food that was brought in to feed the actors and crew. The staff had a chance to watch some snippets of the movie being shot, but with some of the filming lasting until 4 a.m., they didn’t stick around for all of it.

“They were very gracious,” Bush said of the cast and crew. “They did their best to fit in and were respectful of the spaces.” 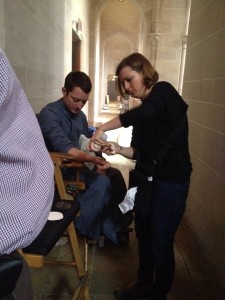 Among the high-profile actors who worked at East Liberty in late September was Elijah Wood.

“It was a moderate distraction. We have lots of groups that use the church, so we really try to make the space available to community groups. The cables, the big vans parked around, people trying to see if they could see Vin Diesel … there was a little bit of that twitter trying to see the stars, but other than that we all just tried to do our usual routines.”

Bush was able to meet Diesel and Wood. A producer introduced Bush to Diesel, and after the producer asked Bush to say a prayer for him, Bush also gave a blessing to Diesel for his expecting child.

But now it’s back to business at East Liberty. Yes, rubbing elbows with Vin Diesel and Elijah Wood on a daily basis will be missed, but there’s plenty to keep the church busy.

“The movie’s gone,” Bush said. “We have the Pittsburgh Symphony performing here with the Mendelssohn Choir(on Oct. 5). We have a big mission fair at the end of October, so frankly it was just one in a series of events in a typically busy month in a busy church. That’s all good. It’s all just part of a vibrant church that is trying to connect with people wherever they might be.”