Many churches across the country turn their buildings into polling places twice a year. At Brockway (PA) Presbyterian Church, you won’t see any polling machines on those specific Tuesdays in April or May and early November, but you can find soup, sandwiches and pies. 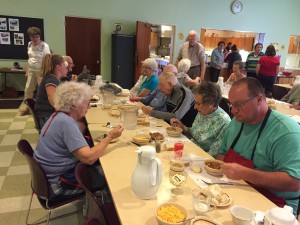 Brockway PC has been holding an Election Day Luncheon since the November general election of 2006, a tradition that is now bringing in over 100 people twice a year for a mid-day meal. By charging $7 per person and having most of the food donated by church members, the Election Day Luncheon is one of the church’s biggest fundraisers of the year.

“It’s definitely geared for Election Day,” explained Jim Grant, the church’s longtime treasurer who was part of the adult Sunday School group that came up with the idea a decade ago. “The people who come don’t really say whether they voted or not. Some are coming from offices and learned to make that part of their routine on Election Day.”

The Rev. Clair Lundberg, an interim pastor who has been serving at Brockway PC for 18 months, agrees that the luncheons have become part of people’s voting traditions in Brockway, which is located in the heart of the town.

“It’s more the atmosphere than anything else,” Clair said. “It is a service to the community, but there’s a warm atmosphere where people can come in and have a lunch and have some great fellowship.”

The nearest polling place to Brockway PC is about three blocks away. Jim constructs 25 posters that are hung around Brockway alerting people of the Election Day Luncheon at his church. Some people will come in and ask for take-out boxes that are taken back to polling places for the workers to enjoy. The church also delivers a couple meals to one specific voting location as well. 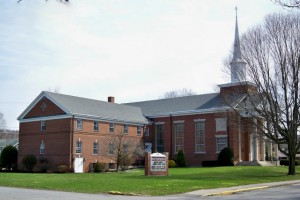 Jim doesn’t remember how or why the idea arose to hold a luncheon on voting day at Brockway PC, but nonetheless it’s been a big hit around the community. The kitchen in the church’s Fellowship Hall opens around 10:30 a.m. and serves meals for roughly three hours. People can choose from between ham salad and egg salad sandwiches as well as “sloppy joes” (barbecue sandwiches). The soup options include vegetable, chili and a wedding soup. And then there’s dessert.

“The finale is a piece of pie,” Jim said. “We have a pie sale prior to the luncheon and take orders for frozen pies from the Gardner Pie Company of Akron, OH. We have those delivered in and distributed on Monday the day before the election, but we have enough on hand for the lunch. And everyone agrees that those particular pies are outstanding.”

The wedding soup was first served last fall during the 2015 General Election. It was prepared by a grandmother whose child attends the nursery school that is located in the church building. The grandmother, who does not attend Brockway, decided to make the soup for the luncheon when it was decided that the proceeds from the event would benefit the nursery school. Even though the nursery school is not the recipient of this year’s luncheon funds, she enjoyed the experience so much that she has agreed to make the soup again for the primary election on April 26.

Giving back has been a theme of the luncheons. They support church progr 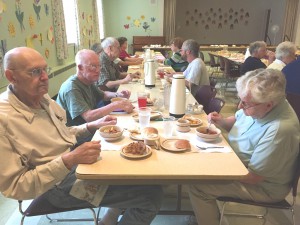 ams like the nursery school and the “Presbyterian Pantry,” a weekly hot lunch prepared in the church kitchen that is delivered to elderly and shut-ins throughout the community.

“There’s always a need somewhere,” Jim said. “There’s no particular funding except donations to prepare those weekly meals (for the Presbyterian Pantry). This time we’re gearing it up toward a mission trip to the Dominican Republic. Other times it’s been for just certain programs at the church.”

So if you’re in the Brockway area on Election Day, stop by the Presbyterian church on Main Street. Sure, the choices will be hard when you walk in the door, but instead of picking between Democrats and Republicans, you might be deciding between cherry and coconut cream. And you can’t go wrong with either of those choices.