Emmaus congregation branching out with ‘The 412′

The Rev. Tim Dooner felt his congregation could do more. So the pastor of Faith Presbyterian Church in Emmaus (PA) pushed his worshipers to go outside of their comfort zones. And that’s when “The 412” was born.

On Dec. 6, Faith PC opened the doors to a new ministry in downtown Emmaus, about a mile from its church building that is tucked into the north corner of the borough. The location of this new center-of-town outreach is – predictably – 412 Chestnut St. Even though it’s a small storefront that might only comfortably hold 20 or so people, the goal of “The 412” is large.

“This for us just feels like a really big step out in faith, and we have a lot of anticipation of what it will become,” Dooner said. 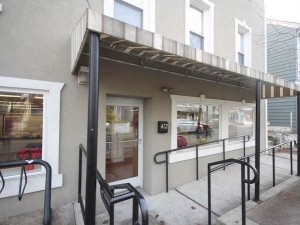 Faith Presbyterian Church in Emmaus has created a downtown location for which to be a presence within the community. And its name (The 412) is its address.

The idea is years in the making, and it’s two-fold. First, it will give people in Emmaus a place to go and socialize with members of the congregation, even though religion will not be at the forefront of the nightly activities at “The 412.” Second, it will allow for the church to have a greater presence in Emmaus, reaching out to people who don’t know what Faith PC is all about.

“There are lifelong residents of our town who don’t know that there’s this congregation that has life up in the corner of the borough,” Dooner said. “We’re very kind and we’re very good at relationships, but we’re not necessarily the ones to get up and start preaching downtown.”

Even though “The 412” is two-plus years in the making, conversations were held years before that among the congregation about how to better serve Emmaus and be a presence there.

“Years ago, before I was called here to serve, the congregation began to wrestle with what it means to have a witness in Emmaus without really having a presence in the heart of town,” Dooner said. “That was just a question they were resigned to not answer for a while.

“As we talked and talked and talked and prayed and discerned about how it was that we would begin to have a witness out of our strengths, the idea of having a storefront space in the heart of the downtown area of the borough began to emerge. It really seemed to connect with our temperament, with our sense of call, our personality and the culture of our town to have a community space.”

Along those lines, “The 412” will also include the gifts and passions of the congregation. Among the nightly activities are things like book clubs, a children’s story time, after-school homework groups, discussions on art and music, and even things like fantasy football leagues for the community.

“It’s all about building these no-strings-attached friendships and relationships with the community with the hope that this becomes our witness,” Dooner said. “These people, our neighbors, may not have seen God, but when they experience our love for them, they are experiencing God on display in us. 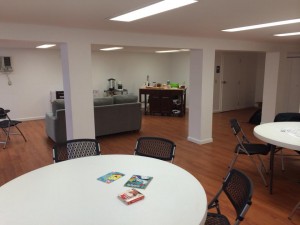 The space inside ‘The 412′ fits about two dozen people comfortably and includes anything from tutoring help to art classes to discussion on fantasy football.

Dooner does see traditional church programming like Bible studies eventually ending up in “The 412” building. He plans to have some office hours for himself there during the week, as well as youth activities on Sunday evenings that would be open to the community, but for right now he’s looking at keeping the activities more community-oriented.

“We’ve learned that there’s just something about that religious façade that is intimidating and off-putting enough to people that they won’t come through the door. … This is a space where we’re really saying it’s not about that overt religion but it’s about love being on display more subtly and helping our neighbors to get over that hump of being afraid of the church as they meet Christians who are not there with an agenda other than to be their loving neighbor.”

While trying not to be too religion-oriented on the surface, Faith PC has been able to incorporate some Biblical foundation into “The 412” name. The congregation has come up with Bible verses that are from chapter 4, verse 12 of several books of the Bible to help explain its ministry.

“There just seems to be an abundance of wisdom aligned with these 4:12 verses of the Bible,” Dooner said. “Someone walking by can see the 412 and that brings up no other associations that might give them pause. If anything, it’s vague enough to spark a curiosity to open the door. And on the congregational end it give us all this meat and all this content to develop a deeper theological conversation about our mission in this space.”

The opening of “The 412” coincided with Emmaus’ annual winter holiday fest. Things like coffee and hot chocolate were handed out to those who came downtown for the event and all were invited to come into the space and meet some of their neighbors.

“There’s something about small groups that are really conducive to building and nurturing meaningful relationships,” Dooner said. “We weren’t afraid to start small. … We’re looking to not just create entertainment but also create an avenue for meaningful relationships. We’re trying to intentionally create a space that’s conducive to small circles.”

Thanks to money set aside through a congregational tithe on its mortgage payments, plus funds received through a Lehigh Presbytery new initiative grant called “C Change,” a year’s worth of funding for “The 412” is already in place for Faith PC. 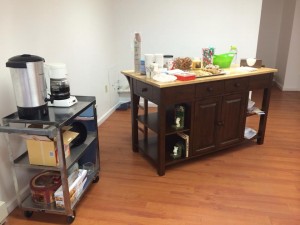 ‘The 412′ is more than inviting to people in downtown Emmaus.

What “The 412” will look like 12 to 18 months from now is unknown. Sure, Dooner and the Faith PC congregation would like to see the activities and amount of people being reached grow, but they are just taking a wait-and-see approach for the time being.

“This is really hard for us because we’re a group of people that loves to have a plan and to have it all mapped out,” Dooner admitted. “In a lot of ways we’re just trying to go out on faith and let God lead. I think there’s a lot of us that are really confident that, because Emmaus is a small town that doesn’t have any kind of community space but loves its identity as a small town and a really connected community, we expect this to really blow up in some awesome ways, to take root quickly, to get a lot of support from the community and to grow.”

Dooner would like to eventually see the amount of activities doubled and times when multiple events are held in the building in a day’s time. There could be partnerships with other organizations and even eventually a larger space, even though the current building sits conveniently near a bus stop and across the street from a well-known bakery, both of which create traffic on their doorstep. Local artists have also been invited to display their artwork there, further putting a stamp on the community theme of “The 412.”