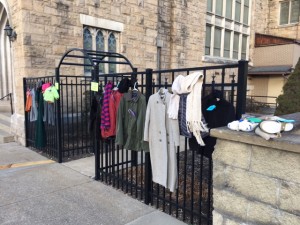 Some congregations might find being located between two homeless shelters a bit unsettling. First Presbyterian Church of Fairmont, WV, relishes it. One of only two churches located in downtown Fairmont, the staff is regularly faced with visits from those seeking help in one form or another.

“We are inundated with people who need assistance,” said the Rev. Elise Neal. “Literally every week I have people who come through my door looking for assistance and needing help.”

Knowing how much the community relies on it, First Fairmont recently took its relationship with its neighbors one step farther when it opened its Street Store after the New Year. Realizing that the weather is quickly getting colder and that some people may not have the proper clothing to combat the chilly temperatures, weekday mornings First Fairmont hangs donated jackets, scarves, hats and other winter clothing on the fence that lines the front of its building.

The items are displayed for the day – and if the weather is good the clothing remains out overnight – for anyone who is need of some new winter apparel. Even toboggans were among the things available.

“We’re a church that believes in giving back to the community, and we try to do that in word and in action,” Elise said.

The idea started with First Fairmont Office Coordinator Rebecca Moran, who was seeing in big cities where people were hanging scarves from trees for those who were in need of some warm clothing. She approached Elise about possibly doing something similar involving the fence that lines the First Fairmont property, and when the church’s Outreach Committee approved the idea, the Street Store was born. Rebecca and Elise started a clothing drive with its worshipers to supply the items for the Street Store. 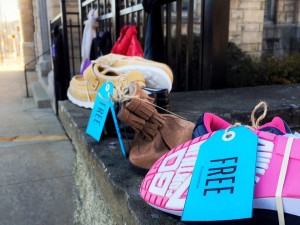 “As you come close to Christmas and the winter months, there’s an increase of people,” Elise said, adding that there is a tent city for homeless people of Fairmont along the Monongahela River. “Rebecca and I think collectively all the time, ‘What are things that we can do where we are in the community to help.’”

While mittens, hats, scarves and coats are the normal clothing that people think of during the winter, First Fairmont also has shoes available in its Street Store.

“We also have a Shoes for Kids ministry,” Elise said of First Fairmont. “That’s probably our main mission project. That’s been going on for 28 years. At Christmas time we give out free shoes to kids in Marion County and this year we gave out over 630 pairs. We had some extra shoes that were leftover and we needed to give out so we thought we’d put out those as part of the Street Store as well.”

To say that the Street Store has been a success would be an understatement. On the first day, Elise went out at 9 a.m. and hung the donated clothing on the fence. Knowing that a nearby Soup Opera was serving a meal that would bring people down her street that morning, she felt this would be a good way to test the waters for the Street Store.

“Within the first hour of me putting stuff out, half of it was gone,” Elise said. “So I walked out and put out more stuff because I knew people would walk by the church in the next hour. By the end of the day, everything that we had out was gone.”

While the majority of the items in the Street Store are donated from the First Fairmont congregation, Elise is finding that community members are now anonymously getting into the act as well. One day she looked out and noticed that a jacket that she hadn’t collected had been hung on an empty hanger.

An added component of the Street Store is that it’s not necessarily for only homeless people. Elise has seen people drive up in their cars and take a jacket with them. 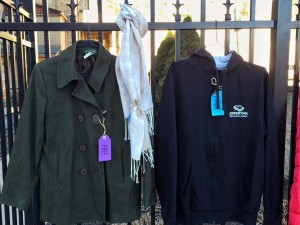 “The truth of the matter is the middle class is struggling. We’re not poor but we’re almost poor. We’re trying to keep up with the status quo. Maybe a mom has spent all of the money to buy all of the things they wanted for Santa. And she spent all of her money on that but she didn’t spend any money on herself because it all went to making sure that her kids had the best Christmas. Maybe she needs a brand-new jacket. I hope this mom will come and get that jacket. It’s for the needy, but it’s for whoever’s in need.”

As an added feature, there are “free” tags on the items that read “These items are free to anyone who needs a little warmth this winter. Feel free to join us on Sunday morning for worship.” The tags also list area resources for people like the hours of the Soup Opera, information on the local food pantry and other outreach services.

Elise is hoping to be able to keep the Street Store open through the month of January. Even though the cold weather will continue long after that, she’s just not sure she’ll have enough items to contribute to it beyond that.

“It’s not that we don’t want to do it longer, it’s how much stuff will we have at the end of the day?” Elise said. “That will dictate how long it will continue.”

Elise admitted that First Fairmont, which is situated in a 100-year-old building and celebrated its 200th anniversary of ministry in 2015, does not see too many of the area’s homeless come off the streets and attend worship on Sunday mornings despite its downtown presence. However, she did say that many of the people who come to her for assistance during the week will then return on Sunday.

“We are the pristine, old, 18th century, Gothic, stately Presbyterian church looking from the outside,” said Elise, who preaches in front of an average attendance of 75 on Sunday mornings. “From the inside we are very diverse in our acceptance and culture. We welcome anyone who comes in, but from the outside world looking in, it still has the stereotypical ideal of what the church is and was.”

A “stereotypical” church is one that reaches out to those in need. It’s exactly what First Fairmont is these days.

“We’re just trying to embrace where we are, recognize the needs in our community and find some simple ways that we can show Christ’s love,” Elise said, “even if that’s just with a jacket.”