Second PC of Carlisle takes to streets to impose ashes 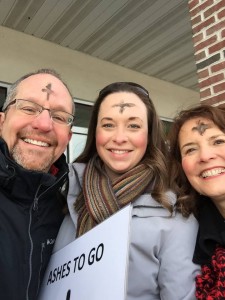 Pastors Jeff Gibelius and Jennifer McKenna flank Beth McKinley while stationed outside a row of businesses in Carlisle on Ash Wednesday.

Prayers and ashes, with no strings attached. That was what three people from Second Presbyterian Church in Carlisle, PA, were offering on Ash Wednesday in a Walmart parking lot and on a sidewalk near a Panera Bread. With ashes clearly displayed on their foreheads and a sign asking “How can we pray for you?”, Pastors Jeff Gibelius and Jennifer McKenna along with church member Beth McKinley braved the morning cold for over an hour in order to connect with people on this holy day that also marked the beginning of Lent.

Although no one took the group up on having ashes imposed on them, the trio did pray with over a dozen people in a selfless act that was designed only to be an outreach to the Carlisle community.

“It was really simply to bless people, to help people, to make a connection with them in God’s name,” Jeff said. “We didn’t talk about our congregation, we weren’t trying to get members, we were trying to just do God’s work.

“So often when you’re a pastor, you’re ministering to people who are already in the flock, the ‘99.’ This was one occasion where we went out in search of the ‘1.’ If we did it on a random day, it might have been perceived differently. But because it was Ash Wednesday, we could use that occasion as a great time to connect with people.”

The idea came from Beth, who works for Lutheran World Relief and had heard about an “Ashes To Go” ministry through her friends. She approached Jeff about it, and even though it was a little bit out of his comfort zone, he felt like it was something he needed to do.

“Ordinarily our congregation plans things well in advance, and that’s the way I’m most comfortable,” Jeff said. “We’ve been talking about encouraging our laity and talking about releasing and giving up control to God, and I thought maybe this is one of those things.

“It was saying yes to something that was certainly beyond my comfort zone. No one could see my credentials there. I was just in plain clothes with a cross on my forehead. Nobody knows I’m a pastor or anything like that. We were open to the possibility of getting rejected. As a pastor I had to give up control of that and say, ‘Worse things could happen. Let’s take a risk on a lay person’s idea and her vision.’ It was important for me to support a bright, enthusiastic lay leader who says, ‘I think we should do this.’”

This ambition to stray from the normal fabric of a Sunday morning setting and go out into the community was something that wasn’t lost on Beth.

“I really appreciate that our congregation is willing to try things,” she said. “I’m appreciative that we’re willing to let the Holy Spirit lead us where it’s calling.”

“The plan was we’d go out there and for the people who had forgotten it was Ash Wednesday or couldn’t go to worship, we thought they might like ashes,” Jeff said. “What we found though was that a much better introduction was to say, “Hey, how can we pray for you today? It’s Ash Wednesday.’”

While many people decided to bypass the opportunity to pray with the group and just go about their day, there were several who took them up on their offer. Among the requests were prayers for their adult children, for immigrants, for a woman who was on her way to her job working with the mentally challenged, for an upcoming work project and more. However, the most memorable interaction involved a mother and son who didn’t disclose what their prayer request was.

“A mother-son pair had seen us when they went into Walmart, then they left Walmart and kind of hung out by their truck, and then eventually they walked over to us,” Jeff recalled. “We said, “How can we pray for you?’ They said, ‘We just need prayer.’ They didn’t want to tell us what the specifics were, and we were fine with that. So we just prayed for them.”

Beth also pointed to this moment as a real highlight for her as well.

“Jeff is a tremendous leader, both in worship and in practice, so his words I think were really moving and hopefully helpful to them,” she added. “I don’t know if I’ll ever see them again, but I’m sure that in that moment we were able to be a witness so that they know they are loved regardless of wherever it is their circumstances were taking them. I said to Jeff, if nothing else, that was why we were here today.”

After spending time in the Walmart parking lot, the group eventually changed its location to a nearby Panera Bread where it received a greater response from that coffee-buying clientele. So next year if Second PC wants to continue this ministry, setting up near Panera is something they’ll strongly consider – along with getting more people involved.

“I’m positive that there were other people within our congregation who would have joined in the effort,” Beth said. “And in the broader worshiping community of Carlisle, I think that, too, is a chance to invite others into a dialog about church beyond the walls and the needs of the community and addressing that in a creative way.

“As is often the case, I get as much out of these things as the people that we are serving. I think there are others in our midst who would appreciate the opportunity to reach out because God doesn’t call us to be comfortable. It’s one of those opportunities to put that into practice and trust in him.”

All in all, it was a worthwhile morning spent in the cold with the goal of bringing a sense of peace to those people with whom the three prayed alongside.

“The traditional message of Ash Wednesday during the imposition of ashes is ‘Dust you are to dust you shall return,’” Jeff said. “It’s a reminder of our mortality. I’m sure the people with whom we prayed with are going to remember that, that someone cared enough to say, ‘How can we pray for you?’”