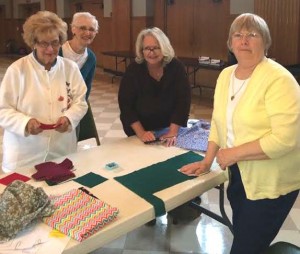 The figures are staggering, and the stories are even more horrifying. In Third World countries like Uganda and Kenya, up to 36 percent of girls don’t attend school during their menstruation cycles. In India, 25 percent of the girls drop out of school when they start menstruating. Those same girls are using things like rags, mattress stuffing, newspaper, banana leaves, corn husks, feathers, rocks and even cow dung to manage their menstruation. And then there’s an account of a 12-year-old girl who traded sex with her teacher for money just so she could buy feminine hygiene products.

Young women not having the proper supplies to allow them to be out in public and attend school during their menstruation is a hardship not lost on Third Presbyterian Church in Pittsburgh. The Presbyterian Women’s group there has taken it upon itself to do something about it, becoming one of just four Days for Girls International “teams” in Pennsylvania – and the only one in the western half of the state. Based in the state of Washington, Days for Girls International travels to areas where feminine hygiene products are not prevalent and hand-delivers kits. While there, it also provides personal instruction and health education to the young women.

“It’s not hard to find heart-breaking stories about what girls have to do to get these products or to be able to get to school,” said the Rev. Karie Charlton, the associate pastor at Third PC. “It’s not just about making their period easier to deal with. It’s also about providing them with an education and a life. We’re not just giving them sanitary products, we’re giving them an opportunity for an education and improving their life.” 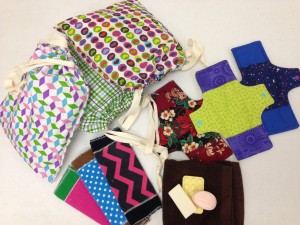 It’s a hands-on mission project Third PC has been involved with for a little less than a year. In that time, the congregation has held two sewing parties where the congregation and its neighbors have turned out to create drawstring carrying bags and other essential parts of the kit. A third sewing gathering is planned for Jan. 22-23 at Third PC.

“It’s been exciting to be a part of,” Karie admitted. “Our PW is generally older women like it is in most Presbyterian churches, but a lot of the younger women have been excited about this project. It’s kind of been a universal girl experience.”

Aside from the handmade drawstring bags that are created by the women at Third PC, sewing shields that fold over the girl’s underwear and snap into place with flannel liners are also part of the weekend’s activities. Each kit has two shields and eight liners that are designed to last for three years. Also included in the kits are two new pairs of underwear, a bar of soap, a washcloth and an instruction sheet.

Third PC, which also held sewing gatherings for Days for Girls International in April and September of 2015, had been involved in the Little Dresses for Africa mission project through the Pittsburgh Presbytery when it learned of the hardships girls are having in regards to feminine hygiene. After doing some research, it found Days for Girls International and quickly took the steps to become associated with the organization. 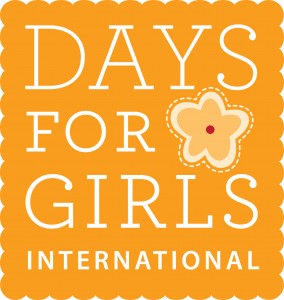 By agreeing to host regular sewing gatherings, Third PC has entered into “team” status and joins ones in Philadelphia, Lancaster and Camp Hill on the list for Pennsylvania. (In West Virginia, there are also teams in Morgantown and Bridgeport, and in Ohio there are seven teams with Hudson being the most eastern.) Philadelphia and Hartville, Ohio, are also home to “chapters” for Days for Girls International where kit components can be sent and then assembled and distributed.

“What we really like about this group is that they just don’t ship them somewhere and hope they get to the right place,” Karie said. “All of these little kits go with a person who goes in and does some education – not just with the girls but with the boys in the different places as well – about general personal hygiene, keeping clean with the little water that they have and how to use the kits. We know they go exactly to where they’re supposed to go. They don’t end up on a dock being sold to the highest bidder.”

The first two sewing gatherings at Third PC drew between 20-25 people and resulted in the making of about 60 total kits. As word has spread about the project, donations of material, soap and other things have steadily rolled in and raised expectations for the January gathering. Through the church’s annual pumpkin sale, money is generated to help pay for the materials that aren’t donated. 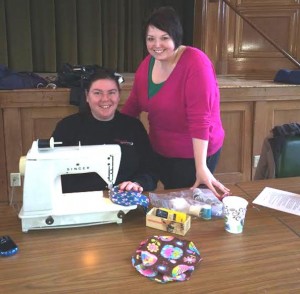 A person doesn’t have to be a sewer in order to participate as an assembly line of sorts also calls for people to cut out patterns and do some ironing. Karie is expecting to see increases in people and productivity this time around because the church has reached out to the Rotaract Club (a service group for ages 18-30) at nearby Chatham University for help.

“We’re excited that there’s a way for us to participate and get to know college students in our area and hopefully some sort of relationship blossoms out of this event,” Karie said, “that they would feel good about our church and we could support them in some ways, too.”

Frankly, it’s been an all-around great experience for the women at Third PC in Pittsburgh.

“Reaching out to other people in need is something we believe in,” Karie said. “We also believe in empowering women – especially the Presbyterian Women’s group – making sure that their lives are better because there is still a lot of work to do there. We’ve really had some good community building time because having a period is such a universal experience. We have really come together as women in our church and our community. There’s been a lot of really great fellowship over this.”

And a lot of lives changed as well.