Experiencing God’s work is a powerful thing. And seeing the end result make a difference in your own community can be just as meaningful. 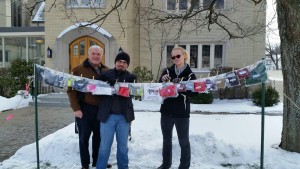 That’s the storyline behind the “Warm It Forward Bradford” program that is the brainchild of First Presbyterian Church of Bradford, PA. During the final week of January, close to 20 churches, businesses and organizations hung clotheslines in front of their buildings where winter clothing items like hats, scarves and gloves were made available to those in need. It was a great success for an initiative that falls in line with what First Bradford is trying to accomplish in its community.

“It’s one of the manifestations of what we’ve been doing over the last year or more with our session and all of our committees,” said the Rev. Katherine Randall, a co-pastor at First Bradford. “They’ve spent a lot of time reading scripture, praying and talking about what God might want us to do next.”

In Bradford, there’s a push for making winter clothing available in October, but when winter actually arrives, that clothing becomes scarce. An added fact was that a local clothing closet had recently closed and the nearest Goodwill store was nearly three miles away.

“There was a real concern about what will folks do for hats, gloves and mittens in the downtown area, and especially those who would be coming to the downtown area for health and human services,” said First Bradford co-pastor Rev. Rob Klouw.

Knowing that there was a gap, First Bradford decided to brainstorm ways in which it could help get winter clothing to those who need it. Then one day when two committees were meeting at the exact same time, the “Warm It Forward Bradford” idea was uncovered by both groups.

“The way in which this came together – with the conversation happening in two different groups that were meeting simultaneously – that very much to me points to the spirit of God actively saying, ‘Pay attention to this thing that is happening,’” Katherine said. “‘Pay attention to what you can do in this time and place.’ I also think it’s a part of God’s call to us about seeing all people. It’s a way to expand our relationships with all of God’s children. The fact this brought a whole bunch of different people in the community together, that points to God’s desire to be in relationship with all of God’s children.” 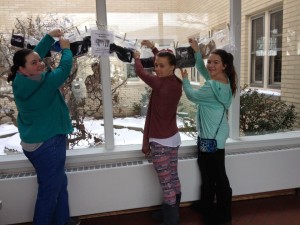 First Bradford took its idea to a McKean County Housing Coalition meeting, and when other churches and civic organizations heard about the idea, they were quick to jump on board. The thought was to put out clotheslines where winter items could be hung and would be easily accessible for anyone who needed them. The clothing was placed in bags so that it would not be ruined by the weather and could be available day or night. Also in the bags was information about places where people could go to find shelter during the cold-weather months.

“We were trying to raise through the visual of the clothesline and the hats and mittens a colorful reminder” that people are homeless this winter, Rob said.

Katherine added that “It was an effort to also say that even though First Presbyterian Church has had a long history of being active in the community, they felt like maybe everybody didn’t know there was a place for everybody, that we wanted to care not just for people’s spirits and provide a place for them in worship, fellowship and education but that it was a concern of the church holistically for people. It came out of this transition that the church is making.”

Not only did the clothesline at First Bradford include donated items from its worshipers, it also consisted of clothing from the adjacent YWCA that didn’t have a place to hang a clothesline. First Bradford also put a clothesline in the breezeway of its church building, which created even more opportunities for the congregation to reach out into the community 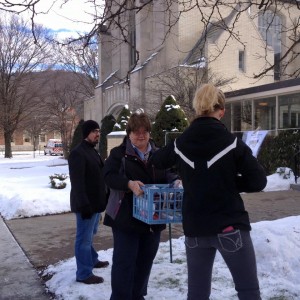 “Not knowing what the week’s temperatures would bring, we wanted to invite people in,” Rob said. “If they needed to come in and needed to talk about an emergency housing need, we could respond to those emergencies.”

Also playing a role in the program was the Presbytery of Lake Erie’s Congregational Life Committee, which gives money to each of the churches in its presbytery to start a new ministry. First Bradford used that check to buy brand-new items to be hung on the clothesline.

The initial plan was to just run the “Warm It Forward Bradford” program for one week. But based on the response, Katherine and Rob both feel like the clotheslines will continue to be present at different times throughout the winter.

“I think this is just the beginning,” said Katherine, adding that things like socks and sweatshirts could eventually be added to the list of available clothing.

Seeing the program grow would be just another prayer answered for the Bradford community. And just another step in First Bradford’s continued effort to make a difference in its own community.

“We always end with a very similar benediction each week, that God is going out and creating possibilities for all of us to do new things, that Jesus Christ is walking side-by-side with us every day into whatever the joys and concerns of the world are,” Rob said. “This truly was a way of presenting God’s love to some who probably had either been hurt or didn’t feel God’s love in a very, very long time.”