There are many things you can get at the mall, from clothing to food to sporting goods to automobile parts. On Ash Wednesday at the Charleston Town Center mall in West Virginia, you can also get ashes. 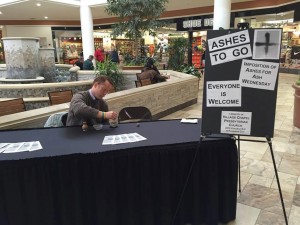 The Rev. Todd Wright mans a table at Charleston Town Center mall where he helped impose ashes on Ash Wednesday.

For the past three years, Village Chapel Presbyterian Church of Charleston has set up a table in Center Court in the mall and offered ashes as part of the ritual that signifies the beginning of Lent. It has steadily grown in participation during those three years with close to 35 people being imposed with ashes this year.

“We want to be a presence that says God is not restricted to sanctuaries and we meet God everywhere we go,” said the Rev. Amy Parker, the educator and pastoral assistant at Village Chapel PC who came up with the idea of offering ashes at the Charleston mall.

Amy and the church’s head pastor, the Rev. Dr. Todd Wright, were stationed at the table for 90 minutes during lunch near Starbucks offering ashes and a blessing to anyone who was interested.

The first year, Amy said, it was mainly church members who stopped by to receive the ashes at the Town Center mall. Last year, poor weather severely limited the numbers, but this year with the help of some free publicity by local radio and television stations, the numbers grew. 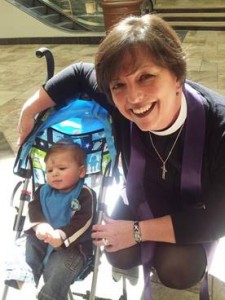 A woman and child are all smiles after receiving ashes from the Village Chapel Presbyterian Church at Charleston Town Center mall.

One group that received ashes was a girls’ basketball team that was in town for a tournament and wasn’t going to be able to attend Ash Wednesday services at their own churches that night.

“They were especially excited to do that (receive ashes),” Amy said. “I think they felt like this was going to give them an edge in their playing.”

New Presbytery of West Virginia General Presbyter Ed Thompson also received ashes at the mall. It offered the perfect opportunity for him to take part in the ritual due to a busy work day.

“Thanks to Village Chapel for having an opportunity to observe Ash Wednesday at the Charleston Town Center,” Ed said on Facebook. “I thought I would miss taking part in any service this year because of my schedule but their creativity made it possible to mark the start of Lent. Well done Todd Wright and Amy Wallace Parker!”

Among the most memorable people Amy and Todd interacted with on Ash Wednesday was a Hispanic family visiting from Virginia. After being a little hesitant to approach the table where Amy and Todd were stationed, the parents and three young boys all eventually walked over and received ashes. A short time later they were trying to get a family picture near the mall’s fountain and Amy went over and offered to take it for them.

“Then about 20 minutes later, they came back over to the table and asked that we take a picture with them,” Amy said. “They wanted to show it to their church back in Roanoke.”

It let Amy and Todd know that their presence was being felt and that they were touching people’s lives through the spirit of Christ.

“We made a goal of thinking of projects we could do outside the walls of the church,” Amy said. “I think ashes are such an accessible ritual for people, that it’s not a sacrament in any denomination – it doesn’t matter if you’re Catholic or Lutheran. It kind of opens the door to people to talk about faith and spirituality. It’s kind of universal: ‘Remember that you were dust and to dust you will return. We are all going to die.’ It’s a starting place where we’re all equal.”