The trip was made possible through a $500 Synod of the Trinity Peacemaking Grant. For more information on the grant, click here. 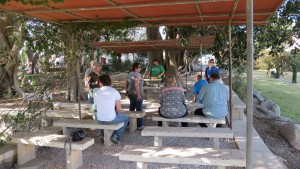 The touring group gathers together at the traditional location where Jesus gave his Sermon on the Mount. There is a Roman Catholic Franciscan chapel on the site, and they gathered to celebrate the Lord’s Supper together, led by the Rev. Mark Boyd of Park Presbyterian Church in Beaver, PA.

In February 2016, I had the privilege of traveling to Israel for seven days on a trip sponsored by Presbyterians for Middle East Peace. The intent of the trip was to expose ordained PC(USA) leaders — deacons, ruling elders and teaching elders — to current issues in Israel and Palestine in preparation for General Assembly in Portland, OR. The Synod of the Trinity generously provided me with a grant from the Synod’s Peacemaking Fund to help pay for the trip.

As I mentioned, the intent of the trip was to expose ordained leaders to current peacemaking issues in Israel and Palestine. To achieve this, we had evening dinner meetings each night with various speakers to teach participants about the historical and contemporary political issues in Israel and Palestine. Speakers included Khaled Abu Toameh, a Palestinian journalist who has been covering the conflict for over 30 years; Professor Shlomo Avineri, a professor of Political Science at Hebrew University of Jerusalem; and Rabbi Michael Melchior, the founder and chairman of The Mosaica Center for Religious Conflict Transformation in the Middle East.

In addition to dinner meetings, we were also invited to briefings at the Ministry of Foreign Affairs for the State of Israel with Akiva Tor, the Head of the Bureau for World Jewish Affairs and World Religions; Liora Herzl, the Deputy Director General for the North American Division; and Amir Weissbrod, the Head of the Bureau for Middle East Affairs. The meetings at the Ministry of Foreign Affairs helped participants understand the Israeli government’s understanding and positions on the Israel-Palestine Conflict as well as Israel’s position in Middle-Eastern and Global politics. 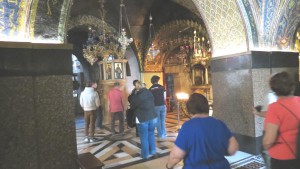 Some of the group toured the Church of the Holy Sepulchre in the Old City of Jerusalem. The church is the traditional location of the crucifixion and burial of Jesus Christ.

We also met Ziedan Atashi, an Israeli Druze, who spoke to us on minority images in majority controlled media as well as his experience as being an advocate for Druze minority interests. This was a wonderful experience as most North Americans have little to no knowledge of the Druze culture and religion, let alone their involvement and perspective in the Israel-Palestine Conflict.

Beside all these meetings, we also met with some grassroots groups who are working to create a new narrative of peace between Israelis and Palestinians, and Jews and Arabs. One of the highlights for the trip for me personally was the visit to the Hand-in-Hand Center for Jewish-Arab Education in Jerusalem. This is a bi-lingual, bi-cultural school where Jewish and Arab children learn together. Each student is expected to learn both Hebrew and Arabic, as different classes are taught in one language or another.

So, for example, as the students get into higher grades math might be taught in Arabic only and history might be taught in Hebrew only. In addition, all students learn about Jewish and Muslim religious holidays and celebrations, and all students are expected to honor and help celebrate each religion’s holidays. Students learn to work, play and build community with each other, regardless of their religion in an attempt to leverage broad social change in families, communities and throughout the nation of Israel. The school is a powerful witness of peaceful inclusion between Arabs and Jews and one that attracts violent reactions from certain communities in the Jewish world and the Arab world. The school occupies the middle ground that ultra-nationalist Israelis and Palestinians abhor. 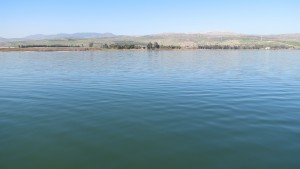 A photo of the Sea of Galilee, taken looking west toward Tiberias.

Another grassroots group working in the area of inter-faith peacemaking that we visited was the Center for Jewish-Christian Understanding and Cooperation. This is the first Orthodox Jewish institution to dialogue with Christians on a religious and theological basis. We met with Rabbi David Nekrutman and Pastor Steven Khoury, who shepherds the largest Arab Evangelical church in Israel and the Palestinian territories. We heard stories from both Rabbi Nekrutman and Pastor Khoury regarding the work they are doing to bring reconciliation between Israeli Jews and Palestinian Christians. They are working to re-write the prevailing narrative of hostility between Israelis and Palestinians, as well as between Jews and Arab-Christians.

Again, to interact with an organization that is working to build alliances, bridges between faiths and to change the antagonistic narrative into a constructive narrative was a joy to see. It is also largely neglected in all major media outlets, which seem to focus on apparently irreconcilable differences.

We also met with the Rev. Kate Taber, who is the PC(USA) mission co-worker in Palestine and Israel, and her husband, Nathan Stock, who is the Director of The Carter Center Israel-Palestine Field Office. Rev. Taber serves on the ministry team of Christmas Lutheran Church in Bethlehem and helps build relationships between U.S. Presbyterians and church partners in Israel and Palestine. We were briefed on Kate’s projects working with Palestinian Christians, particularly women and with kid’s camps. 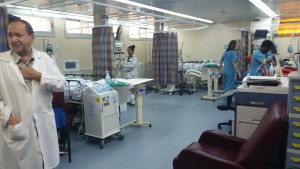 A stop during the trip came at Save a Child’s Heart. This is the pediatric ICU at Edith Wolfson Medical Center near Tel Aviv.

The trip included stops at Alpha Omega Engineering, Ltd. in Nazareth as well as Netafim, which is one of the world’s leading pioneers in drip irrigation systems for agriculture. Alpha Omega Engineering is a company that produces electrodes for deep brain stimulation to greatly eliminate tremors associated with Parkinson’s Disease. Alpha Omega is owned by a Palestinian couple, and the business resides in an industrial park in Nazareth (which is in the West Bank) that is owned by an Israeli businessman. It is another example of intentional Israeli-Palestinian partnerships that are an attempt to re-write the existing antagonistic narrative and help create a productive, secure future for Palestinians and Israelis.

Additionally, we visited Save a Child’s Heart (SACH), which is an Israeli-based international humanitarian project that’s mission is to improve the quality of pediatric cardiac care for children from developing countries who suffer from heart disease and to create centers of competence in those countries, which are largely African countries.

And if all that was not enough, we spent time touring various Christian and Jewish religious sites in Jerusalem, in Galilee and around the Dead Sea. The trip was very full, and I am still processing all the information and all the experiences from the trip. What is abundantly clear is that Israel and Palestine occupy a beautiful part of the world and that the area is populated by passionate, dedicated and hospitable people. The issues in the countries go much beyond the headlines one typically reads in the American media. As in any conflict, there are no easy answers and no easy solutions. Peace and reconciliation requires sacrifice, dedication, perseverance and a shared desire to write a new narrative of peace.