Pittsburgh Presbytery confirms acceptance of Syrian and other refugees

In November, areas around Pittsburgh were quickly saying they didn’t want to welcome Syrian refugees into their areas. Ohio’s governor was one of 31 who declared his state was against allowing incoming Syrian refugees after one of the suspects in the Paris attacks was believed to have entered Europe through a refugee program. Pennsylvania’s governor, on the other hand, was one of only seven who said his state would not change its welcoming stance.

Feeling a need to confirm its place in this discussion, the Pittsburgh Presbytery drafted “A Declaration on Welcoming Refugees,” which states that it is “committed to welcoming the strangers, the vulnerable, and, of course, Syrian refugees fleeing from their war-torn homeland.” At the presbytery’s December meeting at Fox Chapel Presbyterian Church, the document was adopted unanimously. (Read the declaration here.)

“It was a response to the events that had happened, certainly the Paris attack and there was an attack in San Bernardino,” explained the Rev. Sheldon Sorge, the General Minister to Pittsburgh Presbytery. “It had conspired to create some national rhetoric, especially around presidential campaign candidates, saying that we needed to erect some kind of barricades against the incursion of refugees.

“We weren’t trying to argue for unfettered welcome without criteria for safety concerns, but we wanted to say that beginning with talk of barricading rather than talk of welcoming is inimical to the Gospel as we understand it.”

The “Declaration on Welcoming Refugees” is a one-page document that quotes scripture and suggests that people “be compassionate as Jesus was compassionate.” There are also several references to the then current Advent season and how “Jesus was born in a stable and had a manger for a crib; he himself was a refugee very soon after his birth.”

“It’s trying to say that in a current climate where there is much talk at the national level of barricading our borders in some fashion, we want to go on record as saying that the Gospel requires of us that we be hospitable to the strangers and that we want to live into that as the people of God in general and as Pittsburgh Presbytery in particular,” Sheldon said. 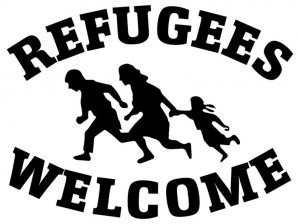 So as governors across the country were standing up for what they believed was right for their areas by not welcoming refugees into their states, members of the presbytery felt they needed to draw up a document that accurately reflected their stance.

“They (the governors) were certainly trying to look out for the safety of our citizens, which is commendable, but they were also broad-brush painting the issue,” Sheldon said. “That didn’t seem to be consistent with our Christian conviction. The presbytery felt like we needed not to be silent at that point and say that we believe that Jesus calls us to welcome the stranger. Even when such things are risky, this is what discipleship calls for.”

The fact that the vote was unanimous in adopting the document says something about the mindset of the presbytery.

“It was a time of real division in the political conversation in the country, whether it was governors or presidential candidates,” Sheldon said. “So for us to adopt it unanimously says that we really know where we need to be. We may not be everything that we need to be but we know where we ought to be and we want to aspire toward that. We were able act on this not as a political issue but as a Gospel issue. We weren’t trying to make a political statement. We were trying to simply say this is what we’re called to be as a people of God.”

Once it was adopted, the document was sent to the PA governor, the mayor of Pittsburgh, elected state and federal legislators and the local media. That exposure led to many positive responses from those agencies, but it also resulted in some negative feedback from both the public and even some of the presbytery’s own constituents.

“It was certainly clear to me that going public with this stand was not something that was universally appreciated, even among Presbyterians,” Sheldon said. “I did get some hard pushback. The pushback was mainly in regards to safety. Certainly concerns for safety are appropriate to Christian conviction. My response to them was simply, ‘We’re not trying to minimize the importance of keeping our children safe, we just don’t think that it’s an either/or kind of thing. We hope that there’s a solution that is both hospitable and also protects safety.’ I did not back down from our presbytery’s position that the Gospel calls us to be a people of welcome rather than people that seal themselves off from danger.”

Pittsburgh has a smaller percentage of refugees than some big cities in the United States but it does have its share of foreign-born people living within its boundaries. That’s why the presbytery felt it was important to draft such as document.

“We have people from all over the world who are brought here to Pittsburgh,” Sheldon said. “And we have a number of agencies that work with that. We weren’t trying to establish a new agency by any means but simply to encourage our congregations to work with existing agencies in that.”

Since the declaration was passed, Pittsburgh Theological Seminary has also taken action in welcoming refugees. It has opened its doors for temporary housing for refugees in some vacant apartments it had available. This action, however, was not related to the presbytery’s declaration. Nonetheless, it continued a wave of positive outreach in the Pittsburgh area that specifically included an action taken by the Pittsburgh Presbytery.

“We are all creatures and as such children of the one God,” Sheldon concluded. “It’s a theological foundation that is cemented by the work of Jesus Christ.”