“Be careful what you pray for.” 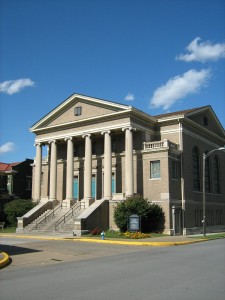 The front of Ruffner Memorial Presbyterian Church in Charleston, WV.

That could very easily be the slogan for Ruffner Memorial Presbyterian Church in Charleston, WV, these days. A once overflowing congregation that had some 800 worshipers on a given Sunday morning in the 1960s has seen that number dwindle to around 40 in 2015, leaving a vast church building in its wake. Having way too much space than it needs, the session at Ruffner Memorial began discussing some years ago what it should do with all of its unneeded room. And they prayed.

What has happened has been downright remarkable. In the last five years, four other area churches have needed a place to worship and have been welcomed with open arms to the building on Quarrier Street. That’s right, there are now five different congregational bodies meeting weekly at Ruffner Memorial, with four of them gathering on Sundays and three at nearly the same time. Surprisingly, there is virtually no confusion occurring and no major glitches have sprung up. In fact, the congregations have even at times shared leadership, yet another wrinkle in this unique situation since there are five different denominations represented here.

“Here are five different congregations meeting in the same building but we have one thing in common, and that’s the love of our Lord, Jesus Christ,” said Bill Brown, the pastor at Ruffner Memorial for the past six years. “I totally believe that binds us together from that standpoint and probably has been the reason we haven’t had any problems. It’s been I think for everyone concerned a positive experience.”

The first of the quartet to come knocking on Ruffner Memorial’s door was St. Michael Independent Catholic Church in 2010. A bishop from Lexington, Ky., phoned Bill about the possibility of having a new congregation in Charleston set up its worship in Ruffner Memorial’s building. With plenty of space to share, the session quickly agreed to the idea.

“They started meeting in a room and outgrew the first room they were in,” Bill said. “This was a new group forming. Our thoughts were that we would be an incubator area for them.” 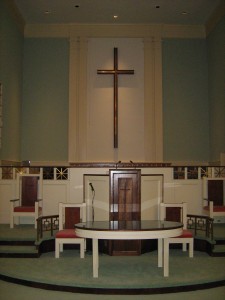 An interior view of the Ruffner Memorial sanctuary, with pulpit and choir loft.

Things really took off in 2015 when two more congregations asked to also be part of the suddenly growing numbers in Ruffner Memorial’s building. First came the Keystone Apostolic Church, which had its own buildingdestroyed by a landslide in March. With Keystone needing a place to bring its congregation that numbers close to 130 on Sunday mornings, Ruffner Memorial approached Keystone about worshiping there. Keystone happily agreed to the offer.

“When we saw what happened to them on television, everyone’s heart just went out to them,” Bill said of the landslide that took away Keystone’s building. “One of the reasons that made us attractive to them is that we are not too far from their church.”

A short time later, the Nigerian Church of God approached First Presbyterian Church of Charleston about sharing space and it was referred to Ruffner Memorial, which felt it still had some room in its building to accommodate yet another congregation.

“There have been absolutely no glitches,” Bill said. “We looked and we prayed for a way we could serve God and it came to us. It’s odd what prayer will do. I can’t emphasize enough how wonderful the experience has been. And I think it’s been a blessing for them as well.”

The Sunday schedule looks like this: the large Keystone Apostolic Church meets at 10 a.m. in the sanctuary, which wasn’t being used by Ruffner Memorial due to its decreased size. Ruffner’s congregation worships at 11 a.m. in the chapel, and St. Michael Independent Catholic Church also gathers at 11 a.m. in a separate large multipurpose room. In the afternoon from 1-3 p.m., the Nigerian Church of God comes together in the chapel to round out the busy Sunday. On Wednesday nights at 7 p.m., Kanawha Valley Church takes its turn at Ruffner Memorial. Kanawha Valley does hold a Sunday morning service at a local high school as well.

“For us, it’s wonderful to have something going on all the time here at the church,” Bill said. “And to be able to serve brothers and sisters in Christ makes it all the more of a blessing. It’s something that we asked God to do for us, to show us the way, and I fully believe that’s what happened.”

Ruffner Memorial Presbyterian Church, which was founded in 1919 and has been in its present building since 1923, is located directly across from the state capitol building in Charleston, so there is plenty of parking for all four of the congregations that meet on Sunday mornings.

The Ruffner Memorial building is obviously large enough to accommodate all of the congregations, but one could see how miscommunication could easily occur when it comes to exactly who is supposed to be where. However, Bill credits a signup sheet that all five bodies are required to fill out when requesting an area for a wedding or other gathering as the saving grace behind the lack of conflicts and confusion to date.

“We’ve had absolutely nothing but blessings from having them here so far,” Bill admitted. 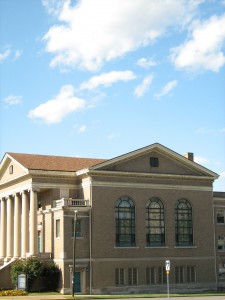 An east side view of Ruffner Memorial Presbyterian Church, which has several different entrances to accommodate the different congregations that use the building.

Ruffner Memorial does not ask for rent from any of the four congregations that use its church but they do divide up the cost of the utilities between the five of them. Keystone, needing a working elevator, did volunteer to repair the building’s elevator and get it up to code completely at its own cost, so Ruffner Memorial has benefited from that in a way.

“The idea isn’t to make money from this enterprise but to help brothers and sisters in Christ who need either an incubator area or need an area to worship in,” Bill added.

The relationship has also resulted in some shared leadership opportunities between some very different denominations. During Lent and Advent, St. Michael Independent Catholic Church and Ruffner Memorial came together for a joint service in the hallway prior to both congregations entering their own worship areas. One of St. Michael’s priests has even led one of Ruffner’s Thursday night Bible studies.

“It’s given Ruffner new life,” Bill said. “It’s been a total blessing to us. I think the people who are worshiping with us feel the same way. For us I think it’s been the greatest blessing.”

There is also a dinner in the works that would include all five of the congregations so that they can get to know each other better. It’s something that no one at Ruffner Memorial – or any of the other four congregations – could have seen coming five years ago.

“Everything that has happened has been as a result of prayer,” Bill said. “We have prayed for a way to be useful and a way to serve God, and I think it’s come to us.”