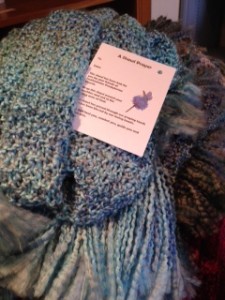 Susan Remely will admit she doesn’t know how it’s getting done. But through the grace of God, it is.

“It” is the Prayer Shawl Ministry that has been thriving at Southminster Presbyterian Church near Pittsburgh. For over a decade, the Prayer Shawl Ministry has been creating knitted comfort shawls for people with illnesses or those who lost a loved one as well as for joyous occasions like baptisms and weddings. The amazing part is that Sue puts out the yarn for the blankets in the church library and within a short time hand-made items appear in a collection box. Sue knows some of the people who are contributing but admits she doesn’t know everyone who is taking part in the ministry.

“It’s sort of Presbyterian,” said Sue, the coordinator of the ministry for the past six years. “The yarn disappears and the prayer shawls reappear. It’s really an amazing thing. I used to get really frustrated in the beginning because

I wanted to know who had the yarn, but our pastor, Ken White, just said, ‘Let it go.’”

Sue estimates that there’s 10-20 people who are anonymously knitting the prayer shawls on a regular basis. This results in a constant supply of shawls that can be handed out at a moment’s notice. There are times when knitting is down, like over the summer, but when there is a need for shawls, a simple request will be made and magically shawls will appear in no time.

“We have a supply available of about 10-15,” Sue said. “They are all different colors. And if we’re getting down to one or two, we put a notice in the bulletin and the next thing I know is there’s like 15 or 20 there.”

The Prayer Shawl Ministry allows people to knit in their own homes at their own pace and at their own schedule instead of having regular knitting parties at the church, another somewhat unique aspect of the ministry at Southminster PC. 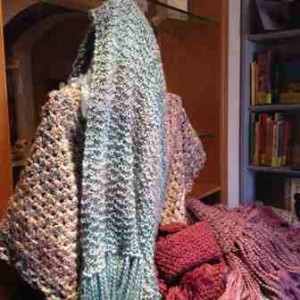 “We used to get together once or twice a year and then it just got to the point where people were just too busy and I got the distinct feeling that they just wanted to take them, knit them and bring them back,” Sue recalled. “So the people who are knitting them don’t know who they’re knitting for and the people who receive them do not know who they are knitted by.

“Some of the women that knit are older and don’t want to go out at night, and some of the women are younger and working or have children and it’s not easy for them to get out at night. I tried it in the afternoon and one person came. You know, maybe I just shouldn’t question it. Maybe I should just let it go.”

The ministry started over 10 years ago when a Southminster member, the late Ginny Patton, brought back the idea from a church in Cape Cod where she had a summer home. Her idea was to continue the ministry that she learned about and to not expand upon it at all.

“We basically make the same prayer shawls,” Sue said. “Some churches make all different kinds but Ginny was fairly insistent that we stick to the traditional one and in her honor we have done so.”

Using a special yarn called Homespun by Lion Brand, the fabric is very soft and extremely durable, making it ideal for the ministry. Also making the shawls unique is that they are knitted with a trinity stitch, which is a “knit three, purl three” sequence that makes it the perfect pattern for an item that is coming from a church congregation.

“There’s a very meditative quality about this stitch,” Sue added. “It’s repetitive. Knit three, purl three is in honor of the Trinity. It gives you a certain peace and relaxation.” 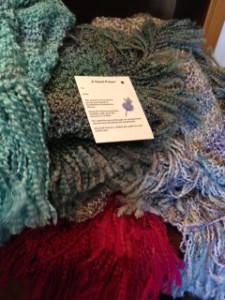 A card accompanies each shawl with the theme that the people will be “wrapped in comfort” and that the shawls were “knitted in prayer and with God’s love.” The cards have specific wording based on the situation but all of them have the phrase, “Wrap this shawl around your shoulders and feel the love of God warm your heart.”

Once someone has been designated to receive a shawl, the shawls are handed out individually to the people who need them. That eliminates any mailing costs, and the yarn is paid for by Southminster’s Mission Commission.

“I would love to find a way to thank people but I don’t really think they want to be thanked necessarily or that the knitting itself is thanks enough,” Sue said.

And it’s the work of those anonymous knitters who are not out for the glory and praise of others that makes the ministry as special as it is.

Only He knows who they are. And that’s just fine with Sue Remely and the Prayer Shawl Ministry at Southminster Presbyterian Church.