Rev. Fred Milligan has found a new home in Chile

The Rev. Fred Milligan Jr. is a bit of a nomad. Moving from place to place, he has lived in eight states, spending time in anywhere from Portland, OR, to the Caribbean Island of St. Croix preaching the gospel and serving the church of Jesus Christ. So it seems fitting that after 37 years of ministry, Fred has launched out on his latest ministry adventure in Santiago, Chile. Whether it will be his last, only God knows. 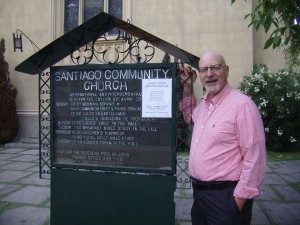 “I definitely feel God’s hand in this,” Fred said. “I had an inkling of this sense of call all the way back to my early days of ministry when missionaries would come from Latin America to the States on leave, and at that point I began to feel that maybe I should be called to do something like this. It’s just amazing how all of this came into place. The last 10 years I have moved all over, so when I learned about the opportunity here I thought, why not Chile?”

Having served in Lackawanna Presbytery several years ago as interim pastor of Covenant Church in Scranton, Fred is currently a member of the Presbytery of Philadelphia where he recently served as interim pastor of the Newtown Presbyterian Church. In December of 2014, Fred began a three-year commitment at inter-denominational Santiago Community Church, an English-speaking congregation in Chile’s capital city of 7 million people.

Located in the Providencia section of Santiago, the Santiago Community Church — the result of a merger of a Presbyterian/Methodist Union church and the St. Andrew’s Anglican congregation some 36 years ago — is a growing congregation that averages between 150-170 worshipers on a Sunday morning. Roughly half of the attendees are what Fred called “ex-patriates” — that is, English speakers representing 23 different countries who do not plan to immigrate and become Chilean citizens. Because of a boom in the mining sector and a growing economy, many Americans are moving to Chile, creating an increase in the number of Americans seeking out the services of an English language congregation. There are only two other congregations where services are held in English: one Roman Catholic and the other a Presbyterian Church in America (PCA) congregation. 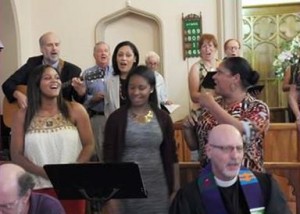 The Santiago Community Church hired its first American pastor in the mid-1990s and then brought in its first non-Anglican minister in 2003. When the latter took a call in Ohio last summer, the church advertised for a new pastor and received applications from around the entire English speaking world and across the denominational spectrum. But the church decided once again to call a PCUSA American pastor: Fred Milligan.

“What I love about SCC are the multiple cultures you are surrounded by constantly, with all that it means: various languages, colors, dressing styles, foods and flavors,” said church member Sofia Gonzalez. “Amazing! There is a great rotation of people because many come to Santiago for six months or a few years, and even though goodbyes are sad, you start to create your own Christian community around the world, so in other words: global Christianity!”

“The Santiago Community Church is where one goes to feel like a part of a family — a physical and spiritual family that accepts you with open arms, no questions asked,” Petrona said. “It’s the place you go on Sundays, not because you want to fill your church attendance quota but because you crave that sense of belonging and warmth that greets you from the moment you step foot into the yard. There are smiles, hugs, encouragement from old and young in abundance. It is like a beckoning shelter that calls to you in this crowded city where one can feel alone and cold even though you are surrounded by millions.

“We come from different places, we have different faces and beliefs, but we are bound by the love of and for God that burgeons in our hearts and that we are never too selfish to share. It is more than a building — it is a community of love.” 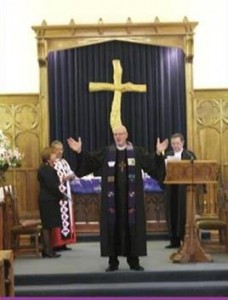 Fred will admit that he has always had a fascination with Latin America. He even applied and received a fellowship from the Fund for Theological Education some years ago to complete a three-month study of Spanish language and Urban Social movements in Mexico. But his primary ministry interest has been regarding the ways in which Christians deal with the kinds of cultural and economic diversity that are a part of most large cities in the U.S. So when this opening in Chile appeared as he sought his next call, Fred was ready for it.

“I have done a lot of work in urban ministry settings,” he said, “from inner-city settings in Memphis, Nashville and Indianapolis to the ‘tall steeple’ or ‘cathedral’ urban settings of Fourth Presbyterian Church in Chicago and Covenant Church in Scranton. Here at SCC, on the edge of the Santiago financial district and just two blocks from the tallest building in Latin America (the Costanera Center), I am definitely in the heart of the urban setting. But although SCC is in a part of the city that is somewhat isolated from the extreme poverty of many residents, we are not content to ignore their plight in this land of economic extremes. The church has long been engaged through various programs such as Habitat for Humanity, Youth for Christ and the Salvation Army with addressing pressing issues in poor neighborhoods.”

While the church has a history of such work with the poor, there’s always more that can be done in Fred’s eyes. Fred served on the staff of the PCUSA Mission Agency as an Associate for Stewardship Education, has spent time in the Evangelical Lutheran Church as a stewardship specialist and also ran a stewardship business of his own (Generous Steward Consulting). In keeping with his history as a fundraising consultant, he is attempting to develop a cycling tour of Chile that would raise money for the charities that the Santiago Community Church support. The idea would be to get sponsors (both in the U.S. and Chile) to pledge so much a mile (or kilometer) toward the fundraiser, with the proceeds going toward the mission projects.

Another outreach the church provides is at its annual International Dinner where the Indonesian Ambassador’s family and staff provided the entrée, with members from Jamaica, Guyana and the Bahamas, Venezuela and the U.S. providing other parts of the meal. As each course is served, representatives will tell a bit about their country. The “USAans” (as Americans are called in South America) brought the appetizers and their cultural presentation was having everyone do the “wave” as though they were at a baseball or football game.

“Cross-cultural ministry is really important here,” Fred admitted. “Not only given the cultural and religious diversity of the congregation itself (their members represent over 18 different denominational traditions, from Pentecostal to messianic Jews) but also relating between this English-speaking community and the larger Latino community that we’re living in. We recently hosted a service during the Week of Prayer for Christian in collaboration with the Santiago Roman Catholic Archdiocese. SCC is viewed as a ‘neutral ground’ for all Christian traditions. On a personal level I’m enjoying that, too, just the cultural diversity both through the congregation and living in this culture as a minority, albeit a privileged one. 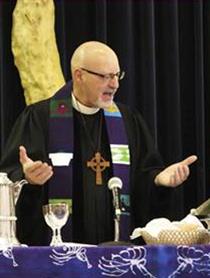 At the church, Fred hasn’t made too many changes in the short time he’s been there. He does think there could be an opportunity for a contemporary service to be started in the future, especially considering it’s the worship style many of the Americans are used to. But overall, he’s just taking a kind of laid-back approach to his first year in Santiago.

“I’m being very intentional in this first year just to be listening and just accompanying this congregation through the seasons of the liturgical year as I come to know them,” Fred said. “Although we have a Scottish Presbyterian as a chair of the council, it is not operating based on our Presbyterian Book of Order. They have their own by-laws; it’s very similar to Presbyterian polity, but I can’t assume I know how things are supposed to be. I’m cautious about waiting and listening in a way that I probably should have always been in any church. As I said, they have a membership that is constantly changing. I’m particularly cautious about that here. So, as I get to know them, I’m also finding that they are getting to know themselves.”

Over the last 30 or so years, Santiago has continued to expand up the slopes of the Andes into new suburbs to the North and East where more and more of the English speaking population now resides. As the church begins to assess its future, it is beginning to think about how to best meet the needs of this population.

“One of the issues this church is facing going into the future is how to continue ministering to the English-speaking community that is more and more spread out at a distance from the church,” Fred said. “Whether that will mean other worship sites, Bible study groups or cell groups are all things that we have to explore.”

And explore is exactly what Fred will be looking to do during the next 2 ½ years he’s in Santiago. He’s hiking the Andean hills on the edge of the city and is planning a week in the Atacama Desert at an elevation of 7,900 feet. He is also taking private lessons in Spanish to continue to improve his cultural exploration during the remainder of his three-year contract. And if that stay happens to be extended for a time longer than currently scheduled, then that seems to be OK with him as well. After all, it’s not really in Fred’s hands how this will all play out.

“We never know how things are going to go in congregations, but after these first seven months I’m enjoying my ministry here immensely,” Fred said. “As they say, if you want to make God laugh, just make a plan. But right now I feel like I could enjoy being here for another eight or nine years.”