Follansbee Church comes to rescue of its community after flood 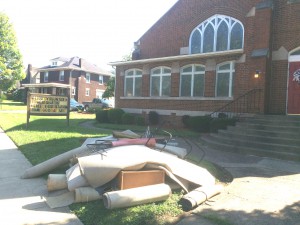 Rubbish from the basement of Follansbee Presbyterian Church waits to be picked up following a flood that affected over 150 buildings, including three churches, in this West Virginia community.

Southern West Virginia was rocked by intense rains and severe flooding in late June when several storms lined up like railroad cars along the mountains and dumped as much as a foot of rain in a few hours on towns likes White Sulphur Springs and Alderson. The images were unsettling. Many people from the region pitched in any way they could with manpower and donations all the while thinking they were happy this didn’t happen to them.

Unfortunately for the community of Follansbee, WV, their time was coming. A little over a month later on Saturday, July 30, storms that brought five inches of rain during two brief stints created flooding that affected over 150 homes and businesses. Just as importantly, a building collapsed into the Allegheny Creek, causing water to rise several feet above the creek’s banks and flow down the streets and into people’s homes. Illegal trash dumping in the creek has also been blamed for the rise in water during the storm.

Among the affected were three church buildings, including Follansbee Church, which had several inches of water in its basement and had to replace drywall and carpeting. The local United Methodist Church didn’t fare as well, having water encompass most of its first floor and getting within three feet of the second-floor sanctuary.

“It got in the ceiling tiles in the kitchen and the basement,” Frank said. “They’re now just four walls and a roof. Everything was condemned.” 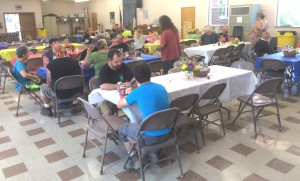 Follansbee Church served between 2,000 and 3,000 meals to workers helping with the flooding situation in this West Virginia town.

The adjacent Christian Assembly church also had devastating damage that has forced it to find another worship space. Invitations by Follansbee Church were made to both congregations, and the Methodist church has been worshiping with the Presbyterians for the past month. The much-smaller Christian Assembly church is meeting on Sundays across the street from Follansbee Church in a funeral home.

“We served the Lord’s Supper and it was different from customs there were used to, but everybody seemed to be feeding off each other and learning and enjoying the camaraderie and the fellowship of worshiping together,” Frank said.

Follansbee Church also opened its doors to the emergency management groups that came to the area for flood relief. The church was also the center for volunteers to register before going out into the community, and for 11 days the church served between 2,000 and 3,000 meals and provided a place to wash up and cool down for the workers, who came from an estimated five states.

“We offered (to be the point location), we had a good location for it and we were minimally affected by (the flooding),” Frank explained. “It just evolved. All of the plans we were making were changing hour by hour. God just leads you in the way that the needs are to be able to help. Some people would just drop off food and leave. We didn’t even know who they were.

“We had a lot of people and they, of course, needed a lot of food and a lot of drink, and every time we would look like we’re about out, somebody would come through the door with a roaster full of food or a couple of crockpots and we’d be able to keep going. We never missed having something there for the people to eat and to drink.”

Read about the flood-relief efforts of the Follansbee Church youth group here.

Follansbee Church also helped out a local Italian restaurant. A recently-purchased freezer in the church that hadn’t been filled kept pizza sauce and other items cold as the restaurant cleaned up after the flood. Otherwise, the shop owner felt like he would have to close because of the loss created from the flood. 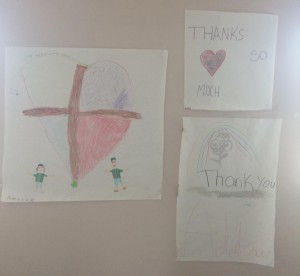 Youth groups at Follansbee Church drew colorful posters as inspiration to the workers who came into their building for food and air conditioning.

Frank didn’t realize the extent of the flooding in Follansbee until he arrived for church Sunday morning. Living in nearby Wellsburg, Frank drove through the town that evening, and while the water was high, he felt like it was just another thunderstorm.

“By the time the morning came and it was time to go to church and meet the congregation, there was debris all over the place,” Frank recalled. “Mud was everywhere. We were stunned by the damage. We didn’t have a traditional worship service. It was more of a period of prayers and planning for what we should do.”

The church building was spared in part because it sits on a higher part of town and was about two blocks from the harshest flooding in Follansbee, which, according to Frank, had no warning from the weather bureau that such a storm was coming. The flood waters did recede quickly, but the mud and debris it left behind was devastating.

Because the flooding took place in a confined area, the Federal Emergency Management Agency did not come in to assist with the damage. Additionally, most insurances won’t cover damage caused by flooding, leaving many people without financial help. Fortunately, there’s a congregation in town that has been more than willing to reach out to its neighbors in this time of need.

“God has given us the facilities to be helpful to people and has also given us the manpower and the community support,” Frank said. “The people in the town rallied together, putting to use what was available to put things right. The people kept their spirit about the damage, the loss and the disaster. Rather than having a melancholy, depressed attitude about things, they expressed their determination to bounce back and to put things back to normal. That’s something we prayed for and tried to preach.”