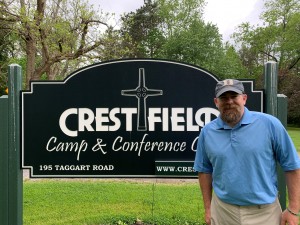 “This too will pass. You can either use it as a stumbling block or a building block.”

That, in short, is the approach Gene Joiner, the new executive director at Crestfield Camp and Conference Center in Slippery Rock, PA, is using this year as the coronavirus pandemic has wiped out camping as we know it during the summer of 2020.

Gene started in mid-December at Crestfield, which is hoping to bring some stability to a camp that has been trying to find a person to fill the shoes of longtime executive director Betty Angelini since she departed in early 2017 after 12-plus years in that role. Gene was pleased with the inroads he had made in Pittsburgh Presbytery in the winter and was excited about the upcoming season.

“I thought we had great momentum,” he said. “I had visited 50-75 churches and church leaders in January and February. We had our first retreat coming up, it was our Tweeners Retreat. We had 165 kids registered. And then of course we had to cancel it.”

Despite the setback, Gene feels the stay-at-home orders caused by the pandemic can actually be a jumping off point for camps and other similar organizations.

“People are so tired of being at home, this could be a great launch point for a camp and camping ministry to be relevant right now,” he said.

Gene is not sitting on his hands waiting to see how things play out. Instead, he and the camp staff are preparing for the “Summer of Jubilee.”

“When it comes to jubilee, it’s a refresh, it’s a renew, it’s a restart,” he said. “And maybe that’s the best thing for us at Crestfield is to restart and re-imagine who we are as a ministry. Because this pandemic has hit, it’s really been a great opportunity to come in and re-evaluate why we do what we do and how can we do it better.”

Gene has broken this “re-imagining” into three phases. The first is how to create a community camp, which includes supporting churches through things like traveling vacation Bible schools and other day camps. The second is establishing a summer camp program at Crestfield that has seen its numbers drop in recent years. This includes everything from the ways and places from which it hires and trains staff to an evaluation of the activities themselves. And the final thing is making sure the camp meets the needs and expectations of the parents.

“In the long term, the pandemic is going to be a great thing for us because we can use that to our advantage,” he said.

Crestfield, like many others, will not hold resident overnight camp this summer. It is planning to host day camps for the local community. Gene would also like to open up the camp’s water areas to the community, like the pool for swimming lessons and the creek for canoe trips.

“How can we provide a space for families to be out of the house in a safe environment and do some camp activities?” he asked. “Not only are the kids creating that camp experience, but can we create a family experience for families?”

Gene’s also hoping to get churches to use the camp grounds for a Sunday “getaway” for worship and a picnic on the lawn as a throwback to yesteryear. Even though Gene, a camp director for 18 years, is planning to have some form of camp this summer, he knows there are large hurdles ahead.

“We have state regulations we have to work through, there’s federal things, but also there’s the aspect of trust when it comes to parents,” he continued. “Parents need to be able to trust us that we’re going to take care of their children. There’s nothing that we’ve done to not earn that trust, it’s just rebuilding that.”

While others in the camping industry may not be as upbeat and positive about things during the pandemic as enrollment numbers and financial models plummet, Gene knows that brighter days are ahead.

“Be patient, trust in the Lord and be willing to look outside the box,” Gene advised. “Everybody can get so bogged down with ‘this is how we do camp.’ I think that is where we’ve had so much success – just because that’s the way you think you do camp, there’s usually somebody doing it bigger and better.

“What a great opportunity right now. Be patient, figure out exactly what you believe, why you believe it and how you’re going to do it and then perfect that. Use this time to do that learning process.”

Despite being upbeat, Gene understands that this is an unprecedented time for everyone during the coronavirus, especially those in camping circles.

“It could be really bad for our industry,” Gene admitted. “There’s some great challenges ahead of us. We’re not in the golden age of camping like it was in the ’60s and ’70s where churches were booming with kids and sending them to us. I think now it’s going to be really challenging for all of us.

“But I think we’re going to be more relevant – now more than ever – because of the mental health and the need for people to be out. In general, there is some caution and we need to be careful. For us, we’re not looking to build anything new or launch anything brand-new but figure out what we can do to make what we have better.”

Gene’s name may sound familiar to those in the Synod of the Trinity region as he was formerly the executive director at Krislund Camp and Conference Center in Madisonburg, PA, from 2013-18.

“We had great success at Krislund,” Gene said. “They had a phenomenal board of directors and the churches were so supportive in all of the directions we were going. We really just wanted to get closer to home (North Carolina).

“One of the skill sets we have is to build camps. For me, my call to ministry is to go into a situation and see how we can use the gifts and the skills of the people and the property and try to leverage that, maximize that to do ministry. I felt really strong that we had built Krislund to a point for them to be supper sustainable. And for me, I was ready for that next big project and that next big challenge.”

Gene originally came to Krislund after a five-year stint at Camp Maranatha in Alabama, then returned to Alabama for two years to be the executive director of a United Methodist Camp.

“It was a good fit, but not a great fit,” Gene admitted. “We went outside the denomination and that was a challenge. We had become really comfortable with the Presbyterian Church. The position at Crestfield opened up and it just seemed to be the perfect timing for us to come back home.”

A ministry of Pittsburgh Presbytery, Crestfield Camp is also a 501c3 organization, a move it made three years ago to become a more regional camp that can cater to neighboring presbyteries as well as to broaden its grant-receiving opportunities. This aspect of Crestfield was an attraction for Gene.

“The board of directors is looking to do new ministry,” Gene said. “I love that, I love the idea of ‘new.’ And then use what they’ve done in the past and see if we can leverage that.”

The flexibility of being a 501c3 camp allows Gene and the camp to have options that allow Crestfield to become a focal point for the region.