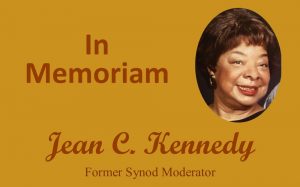 Jean C. Kennedy was valedictorian of her graduating class at Campbell County High School in Virginia. A few years later while enrolled at the Capitol City School of Nursing in Washington, D.C., she graduated as class president and valedictorian in the registered nursing program despite being the only African American in her class. And later in life, Jean was the first African American woman to serve as moderator of Pittsburgh Presbytery.

But for someone who was “first” many times in her life, Jean was always putting other people ahead of herself. That was simply her nature.

Described as a “widely beloved nurse and Presbyterian Church leader,” Jean passed away Sept. 25 at her home in Pittsburgh. She was 78.

A ruling elder and former clerk of session at East Liberty Presbyterian Church in Pittsburgh, she chaired and served on numerous committees and commissions. Jean was also well-known in Pittsburgh Presbytery, serving as a member of the staff for 15 years. At the national denominational level, Jean was a former member of the General Assembly’s PJC.

A complete obituary is available by clicking here.

Jean served the Synod of the Trinity in various ways as well. She was the Synod’s moderator in 2005, a member of the first Governing Commission in 2015 and a Synod commissioner multiple times, the last time from 2013-18. She also made regular visits to the Synod office, overseeing the staff’s health and wellness program.

“Many of you know that Jean was an incredible gift to the leadership of the Synod at various times: her faith, her pastoral care, her willingness to learn, laugh and challenge,” said the Rev. Susan Faye Wonderland, the Synod’s transitional executive. “We were always grateful for these gifts. What many may not know was Jean’s special relationship with the Synod staff.

“For a number of years Jean came multiple times a year to Camp Hill to be with the staff and provide a time for health and wellness. She would lead us through chair exercises, meditation and bible study – encouraging us to listen to God’s word and one another. Her health/wellness lessons were always practical and often attainable – so much so that it was hard to ignore her words! It was a joy.

“After our group time and some lunch, Jean’s attentive ear was open to anyone who wanted to spend individual time with her for a special time of pastoral care. Her presence was ministry to us, and we miss her dearly. Clearly, the Spirit filled and overflowed from this woman of faith!”

An in-person memorial service will be held for Jean on Saturday, Oct. 9, at noon at East Liberty Presbyterian Church in Pittsburgh. Masks will be required, and social distancing will be observed. For those unable to attend in-person, the service will be streamed live online, with video saved to Facebook and/or YouTube. In lieu of flowers, the family requests memorial donations to the Megginson Homestead Restoration Project of Riverbends Development, Inc., 1007 Delafield Road, Pittsburgh, PA 15215.

The Synod of the Trinity is thankful for Jean’s work and service to the region and sends condolences to her family and friends.