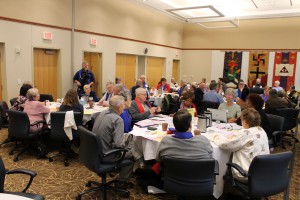 Synod commissioners engage in conversation about important topics affecting the region during the annual Assembly Meeting in State College, PA, in October.

It began with bagpipe music – a nod to the Scots-Irish roots of the Presbyterian denomination. It concluded with the installation of a new moderator and vice moderator that will lead the Synod of the Trinity into its 301st year of being. In between, the annual Assembly Meeting featured powerful worship, thought-provoking conversation and engaging workshops aimed at bringing issues that are plaguing the world to the forefront. With the Synod’s tricentennial as the backdrop, Presbyterian Church (U.S.A.) Stated Clerk the Rev. Dr. J. Herbert Nelson addressed the assembly body, and the Rev. Dr. Alonzo Johnson [coordinator for the Self Development of People (SDOP) of the PCUSA] was on hand to provide the opening message Sunday night.

Joining the Assembly, which was held at the Penn Stater Hotel and Conference Center in State College, PA, on Oct. 22-24, by video conference call from his office in Louisville, J. Herbert congratulated the Synod for its 300 years of ministry to the region. While that is a milestone worth recognizing, he said, he was also quick to challenge those who had gathered to continue thinking toward the future. 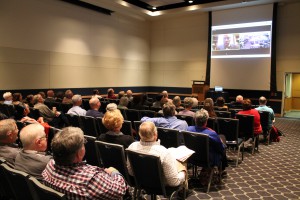 Rev. Dr. J. Herbert Nelson, the stated clerk for the PCUSA, offered special anniversary wishes to the Synod from his office in Louisville.

“Congratulations. Three hundred years of history,” J. Herbert continued. “Don’t take it lightly, because if it had not been for the Lord on your side you wouldn’t know today where you’d be. And I think that’s our story, that’s our song and, quite frankly, that’s our life.”

In commemoration of the 300th anniversary of the Synod, the Assembly kicked off in a room adorned with eight colorful confessional banners on Sunday evening with a worship service that began with the playing of bagpipes by Betsy Gamble of State College. It also included the Sacrament of the Lord’s Supper served on a newly-commissioned communion set that was handcrafted in honor of the Synod’s 300th birthday. Alonzo delivered the sermon, which was titled “Been in the Storm So Long” and based on Luke 8 when Jesus calmed the waters.

“The power of Jesus Christ reminds us that each and every one of us in this boat, that we have the presence of God with us,” Alonzo said. “And when you have the presence of God with you, that means the storm may never change – because Jesus never promised that – but you and your perspectives are changed. As you change you need a prepositional change, right? We’re not ‘in’ the storm anymore. With Jesus we are ‘on’ the storm. Or we need to go ‘through’ the storm.” 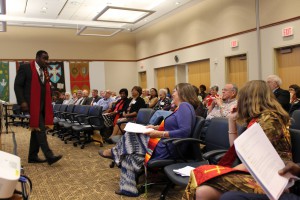 Alonzo, who was a prison chaplain for nine years prior to joining the national SDOP office, expressed his desire for improved programming for those who are released from incarceration.

“You know how many people are released from prison every year?” Alonzo asked. “Seven hundred thousand. And you know where they’re going to go? To your churches, to your communities. What they would say to me is, ‘Chaplain Johnson, the church forgot about us. We’re in the storm and they left us to die.’”

Despite the obstacles that face this country and our communities on a regular basis, Alonzo has plenty of hope that with hard work through the church things can get back on track.

“I believe that God is calling us as Presbyterians to have another 300 years and another 300 after that to do God’s will,” he concluded, “to take care of families, to get into prisons and take care of those people who are languishing and in need of human care.” 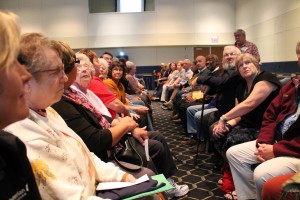 Participants look at the screen to see the next question to answer during a race and privilege exercise.

Alonzo and Wayne Gnatuk, who worked with Alonzo on the national SDOP committee, led a workshop Monday afternoon that focused on race and privilege. A “personal inventory exercise” enabled the Assembly body to speak one-on-one about circumstances where race has been front-and-center at a time in their lives. A second activity provided individuals with a paperclip necklace that had a length based on how a person answered questions regarding how privileged they are.

Tuesday morning, outgoing Synod Vice Moderator Helen Kester spoke about “Stones That Divide.” She used a visual wall of cardboard packing boxes that had written on them words of action that are dividing the country like “hate and contempt,” “discrimination” and “intolerance” to help explain how these things are dividing the world.

“The church is the hope for the future because we rely on something and that something is God,” Helen said, later adding, “We need to look for those God moments that let you know that you are making a difference.” 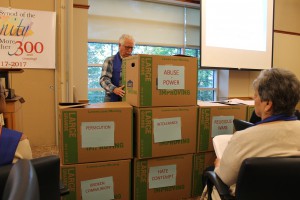 Presbytery of Carlisle commissioner Charlie Best places a box on a wall of ‘Stones That Divide’ during Helen Kester’s sermon.

Commissioners were tasked with bringing back information from their presbyteries regarding three conversation topics that were given to them. They dealt with “walls that divide us from one another in our communities, presbytery and the larger PCUSA church,” topics for discussion at the 2018 Synod spring regionals, and, in honor of the 500th year since the Reformation, naming a couple of things they felt strongly enough about to “nail them up on the church doors for all to see.”

A conversation centered around the topic “How Do We Listen?” was led by Skip Noftzger (executive presbyter and stated clerk, Redstone), giving commissioners and others helpful insight as they live out their liaison roles with their presbyteries. Intertwined amid the presentations was music that filled the room through the skillful piano playing of Brett Terry (Minister of Music & Worship at Pine Street Presbyterian Church, Harrisburg, PA) and the beautiful singing of Adrianna Cleveland (of Pittsburgh).

Two separate offerings were taken at the Assembly, with the $1,728 that was gathered going to Presbyterian Disaster Assistance earmarked toward the work PDA has done and will continue to do with the regions affected by hurricanes this year. Per capita giving for 2019 will remain at $2.30 for the fourth straight year. Because there is only one Synod Assembly per year and it occurs in the fall, the 2018 figure was voted on last year.

This communion set was hand-crafted and commissioned in honor of the Synod’s 300th birthday.

With the Presbytery of Philadelphia and the Board of Pensions also celebrating their 300th anniversaries in 2017, Kevin Porter (stated clerk, Philadelphia) and Allison Seed (church consultation BOP, Presbytery of Philadelphia and the Synod of the Northeast representative for BOP) shared historical stories about their organizations Monday night amid an ice cream social. Three congregations that submitted photos/videos of celebrations they held in honor of the Synod’s 300th birthday were selected to receive $500 grants following a video presentation that highlighted those submissions. Those recipients are: Highland Park Presbyterian Church in Lewistown, PA (Huntingdon Presbytery); Plumville Presbyterian Church in Plumville, PA (Kiskiminetas); and Waverly-Bethel Presbyterian Church in Waverly, WV (West Virginia). An update on a tree-planting initiative, which is occurring at camps in the Synod region in celebration of the Synod’s anniversary, was also given.

The three-day gathering, complete with plenty of cake, ice cream and even the reading of a proclamation from Pennsylvania Governor Tom Wolf in honor of the Synod’s tricentennial anniversary, not only recognized the past but also challenged those who participated to make a difference in their congregations and communities as the region embarks on its next 300 years.