‘This is not a museum.’ Old Stone Church 221 years young. 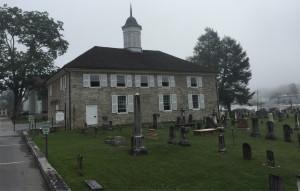 Old Stone Presbyterian Church in Lewisburg, WV, is the oldest church building in continuous use west of the Allegheny Mountains.

Plenty has changed in the last 200-plus years, but one thing that hasn’t is the sanctuary located on Church Street in Lewisburg, WV. The 75-by-44-foot structure houses 150 worshipers every Sunday morning, making Old Stone Presbyterian Church not only one of the larger congregations in the Presbytery of West Virginia but also the oldest church building in continuous use west of the Allegheny Mountains.

“The interior has been modified a few times across the years, but it is still the original sanctuary,” said the Rev. Anna Pinckney Straight. “It’s a very classic, reformed building. There are no stained-glass windows. It is very sparse in its interior.

“Beautiful glass that looks out into the world. A raised pulpit that is newer but not new. I believe it was the 1960s since there were any modifications to the sanctuary. There’s not decoration or plaques on the walls. It’s very classic reformed; nothing that would tempt you to idolatry.”

Originally named Lewisburg Presbyterian Church when it was established in 1782, the sanctuary building was constructed of 22-inch thick limestone native to the area in 1796. According to the church’s documented history, the women of the congregation assisted the men in the building project by riding horseback four miles to the Greenbrier River to get bags of sand that were used for the mortar. The sanctuary was originally 44 square feet before an addition in 1830 expanded the size. Buildings have been added to the property over time, but a conscious effort has been made to keep things consistent in the sanctuary.

“There is still no air conditioning in the sanctuary,” Anna continued. “That is because the windows open, they are very functional. Because we have the balcony and the lower level, when we open them on Sunday mornings we often get a lovely cross breeze. That doesn’t mean it’s not very warm some days in the summer. Even though the congregation has had the resources in the past to add air conditioning if that was their desire, there is a large portion of the congregation that doesn’t want it because they didn’t have it originally.” 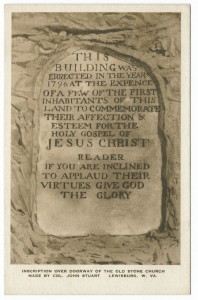 Still prevalent is a stone over the entrance door to the sanctuary that was carved by Col. John Stuart, who was a commander in the Revolutionary War. It reads, “This building was erected in the year of 1796 at the expense of a few of the first inhabitants of this land to commemorate their affection and esteem for the holy gospel of Jesus Christ. Reader, if you are inclined to applaud their virtues Give God the Glory.”

“It is above us when we enter into this building and it is beneath us in everything we do,” said Anna, who is the first female head of staff at Old Stone Church. “We are here, we are the recipients of such a cloud of witnesses, and it is our call to give God the glory in what we do. That connects us to all of the generations before.”

Placed on the National Register of Historic Places in 1972, the Old Stone Church building survived the Civil War in part because it was used as a hospital and later for sleeping quarters for troops. The Battle of Lewisburg was a short skirmish – lasting only 27 minutes – but the Confederates lost 80 men while another 100 were wounded and 157 more were captured as prisoners.

After the battle ended, a Confederate sniper shot and killed a Union soldier, greatly angering the Union commander, who refused to let the townspeople hold services for the dead Confederates that had piled up in the sanctuary. The Confederates were eventually buried in a trench along the south wall of the church. After the war, nearly 100 soldiers were relocated together in the form of a cross on a hill near the church building.

Even though it is not owned by the church, Old Stone Cemetery is still located next to the sanctuary building, allowing for a constant reminder of those who have come before.

“If you need a visual reminder that we have a responsibility both to the past and to the future, you just have to look out the window,” Anna said. “It’s a powerful testimony.”

Also historically, one of the first pastors at Old Stone Church was the Rev. John McElhenny, who helped establish the Greenbrier Military School and the Greenbrier College for Women, neither of which are still functioning today but ones that had a distinct effect on the region.

“That importance of education continues to be a thread in terms of our outreach and where we place our support,” Anna added. “Old Stone’s roots go into the entire educational system of the state, and that’s been an important part of who we are.” 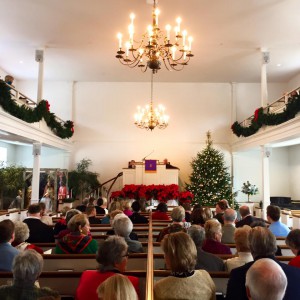 The sanctuary includes a balcony and easily seats the 100-plus worshipers who continue to gather on Sunday mornings. In keeping with the spirit of tradition, Old Stone Church still uses the wooden collection boxes that were made in 1844 to collect the offering. U.S. Presidents Andrew Jackson, John Tyler and Millard Fillmore are all said to have worshiped at Old Stone Church in the 18th and 19th centuries.

Because of its higher-elevation location, Old Stone Church has been able to avoid flooding that has plagued the area in recent years. Despite the pomp and circumstance that surrounds the building and its heritage, Anna admits that the congregation doesn’t get carried away with the tradition aspect of the church.

“We are the recipients of this history but this is not a museum,” Anna said. “We’re a community of faith called forth into the world. It (the sanctuary) is a wonderful grounding but we have roots and wings. Our roots are deep but we believe God calls us to go out into the world.”

“You walk in and you have a sense of the generations who have come before,” Anna admitted.

Located across the street from one of the original Carnegie Hall performance centers and near a community college, Old Stone Church recently completed a large renovation of the Education Building that adjoins the sanctuary by a breezeway. Air conditioning units and other amenities were added, but that project did not affect the worship space in any way.

While attendance normally dips for congregations during the summer months due to vacations and other commitments, Old Stone Church – in part because of its traditions and uniqueness – can see an uptick in worshipers on a Sunday morning.

“We have a lot of people who visit in the summer,” Anna said. “It’s, in part, a tourist destination but also families come back. Summertime is a time when there are a lot of reunions, and this tends to be where they gather. It’s really fun in the summer because you get to meet a whole new crop of people and enjoy the fluctuation of the congregation.”