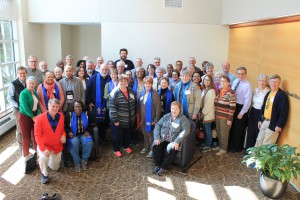 Those in attendance at the annual Synod of the Trinity Assembly dressed in cardigan sweaters and sneakers in honor of famed children’s television program host Fred Rogers of Mister Rogers’ Neighborhood.

Fred Rogers’ legacy could be seen and felt during the Synod of the Trinity’s annual three-day Assembly in State College, PA, in late October. Not only were cardigan sweaters and sneakers the suggested dress code, there were several discussions relating to what it means to be a good neighbor while the theme song from Fred’s “Mister Rogers’ Neighborhood” and other meaningful clips from the famed children’s television show were on full display. It was all a way to celebrate the 50th anniversary of the first airing of the show, which featured the ordained Presbyterian minister from Pittsburgh Presbytery, while also bringing his call to be a good neighbor to the forefront of the conversation for the region.

Messages were delivered by guest speaker Rick Ufford-Chase [moderator of the 216th General Assembly (2004) and co-director of the Stony Point Center in upstate New York – a multifaith community that provides overnight and day-use accommodations and meeting spaces for individuals and groups] and Synod Moderator John A. Bolt, both of whom accentuated the need for neighborly relations in our communities. 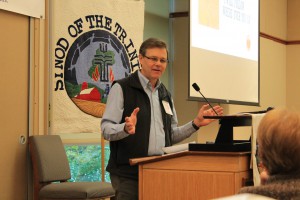 Rick Ufford-Chase delivers Monday morning’s opening worship titled “I will follow where ever you go” based on Luke 9.

Tuesday morning during closing worship, John continued the Assembly’s theme of calling on the church to be vocal and have its voice heard. “It has never been more important for Christians to stand up and say ‘Enough!’” he said. Later in the meeting, John (Presbytery of West Virginia) was installed to a second year as Synod moderator, while Judy Angleberger (Beaver-Butler Presbytery) received the same installation for a second year of vice-moderator.

Aside from Rick and John, the Assembly included several other guest speakers, many of whom joined the meeting by video conferencing. In fact, the opening worship was available for viewing to the entire Synod of the Trinity region through this means. Ann Van Dyke, a volunteer for the Harrisburg-based Community Responders Network that works against hate and bias, was one who joined the meeting virtually and gave a presentation on how the church can stand up against hate groups. “The solution to hate speech is speech,” she said. “Silence is the welcome mat for hate and churches have been silent for too long.” 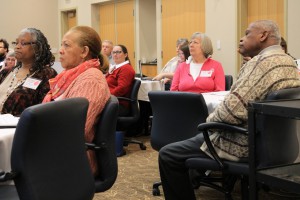 There were several challenging videos and presentations made at the Synod Assembly in State College, PA.

The Community Responders Network created three “readers’ theater” skits around the roots of bias, belief and behavior, a project in which the Synod partnered. One of those skits that dealt with assumptions relating to lifestyle and sexual orientation was shown at the Synod Assembly on Monday afternoon. The challenging production was followed by round-table discussions aimed at fostering future conversations between the commissioners, their presbyteries and congregations.

Those gathered were also challenged at the Assembly on Sunday night while viewing the “Doctrine of Discovery,” a documentary about a 16th century movement that has been the subject of conversation at the last two General Assemblies. The Doctrine of Discovery justified the eradication of Native Americans in the United States, declaring that lands were unknown and unclaimed until a white, European “discovered” them and claimed them. At this year’s General Assembly in St. Louis, two overtures called on the PCUSA to study, denounce, confess complicity in and repent from the justification of the Doctrine of Discovery.

Keeping with the overarching “neighborhood” theme, a demographics workshop that included information gathered through Mission Insite featured a sampling of what a demographic study would show about those living within a close radius to the church. It prompted discussions on some of the surprising characteristics associated with those households in that geographic circle and how churches could target their ministries to help reach those people. 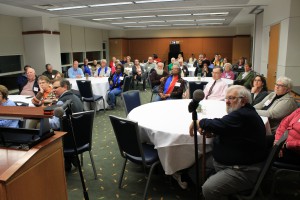 The Assembly body listens to staff people at Stony Point Center, who joined the meeting by video conference, discuss their role at the New York-based facility.

A communications presentation by Synod Communications Coordinator Mike Givler demonstrated how people can be a good neighbor from afar. He showed how video conferencing system Zoom and the Synod’s camera/speaker Meeting Owl can assist congregations and presbyteries in including people who aren’t able to attend a meeting. The Synod is offering a special Communications Grant of up to $160 for presbyteries who buy a one-year Zoom license. The Synod is also available to purchase the Owl in bulk at a reduced rate for anyone interested in that product.

Zoom was used Monday night to connect with four staff people who live at Stony Point Center. The conversation centered around the inclusiveness of the facility regardless of the culture or faith backgrounds of those who reside there. Following this time, a Mister Rogers-themed goodbye celebration was had in honor of Chantal Atnip, who is retiring from the Synod as its treasurer and Strategic Ministry Support after more than 13 years.

Business actions included approving a recommendation by the Governing Commission that Synod Transitional Executive Susan Faye Wonderland’s terms of service be extended through the October 2021 Assembly meeting. Susan will remain on staff until at least the end of December of 2021 to allow for orientation and training of the incoming executive. 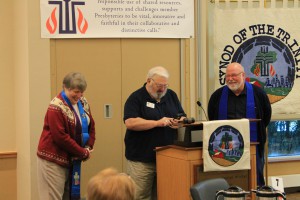 Commissioners and ex officio members received the book “Where the Cross Meets the Street.” This reading was recommended by the General Assembly’s co-moderators for a year-long book study across the denomination.

In other business, the Assembly approved a recommendation from the Synod’s Finance and Budget Advisory Team to raise per capita in 2020 by 10 cents to $2.40. The current per capita rate of $2.30, which is the figure that will be used in 2019 following last year’s vote, had not been raised at the Synod level for the past four years. 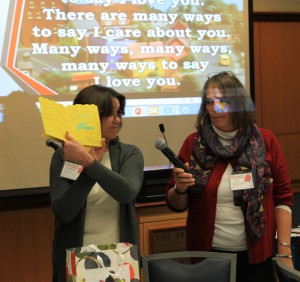 An offering to benefit Presbyterian Disaster Assistance totaled $1,540. The Synod of the Trinity agreed to match up to $1,000 of the offering, which will support the work being done by PDA following recent hurricanes that affected the Carolinas and the Gulf Coast. In addition, a sweater drive resulted in 68 garments being collected for the annual Mister Rogers’ Neighborhood Sweater Drive. Gregg Hartung, the director of Presbyterian Media Mission and a friend of the late Fred Rogers, is one of the organizers of the drive and also joined the Assembly by video conference to talk about Fred and how the recent focus on his life through a documentary and upcoming movie have re-energized his legacy.

The theme song from “Mister Rogers’ Neighborhood” opened the Assembly on Monday morning and was played again later in the day along with various other hymns with accompaniment from pianist Ellen Hunt, the Minister of Music Emerita at Market Square Presbyterian Church in Harrisburg, PA. 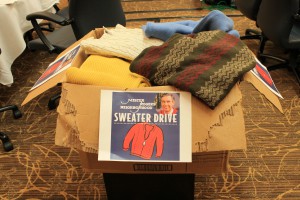 Nearly 70 sweaters were collected and donated to the Mister Rogers’ Neighborhood Sweater Drive.