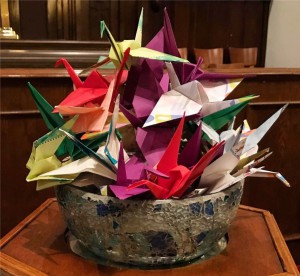 Peace cranes were made at Riverview United Presbyterian Church in the hours following the shooting at nearby Tree of Life synagogue. “For everyone that’s folded, that in and of itself is a physical act of prayer,” said Steve Werth, pastor at Riverview United Church.

It’s now known as the “deadliest attack on Jews in American history.” But for people and congregations in the Pittsburgh area where a lone gunman killed 11 worshipers at Tree of Life Congregation and wounded six more on a late October Saturday morning, it’s a time to rally around their neighbors.

Several congregations near the Squirrel Hill neighborhood where the Tree of Life synagogue is located, which is also the same neighborhood where famed television show host Fred Rogers of “Mister Rogers’ Neighborhood” attended church, held special services in the hours and days following the Oct. 27 attack. Within three hours of the shootings, Riverview United Presbyterian Church hosted a prayer vigil for the grieving community, and a few hours later another vigil was hosted by Sixth Presbyterian Church. Many other congregations in Pittsburgh Presbytery scheduled special prayer services in the wake of the massacre.

“Gun violence happens, and it’s something we are incredibly aware of,” said the Rev. Steve Werth, the pastor at Riverview United Church. “When we talk about the role of the church and being hope and sanctuary in the neighborhood, we understand very clearly that it means that we are to be a beacon of peace in a world that often is not very peaceful. On the other hand, I didn’t expect this kind of hate crime in Squirrel Hill. This was tragic and horrific.”

Riverview United Church is located about four miles from Tree of Life synagogue. Steve does not know any of the people who were killed or wounded in the shooting but added that there are several people in his congregation who do know those who were targeted.

“We have a handful of people with Jewish backgrounds,” he added. “It hit really close to home for a lot of people.”

The evening following the shooting, prayer vigils continued to crop up around the city. An estimated 750 people crowded inside Sixth Presbyterian Church for such a service that helped start the healing process for the neighborhood.

“In spite of our religious, ethnic, political and economic differences, despite the diversity of our genders and sexualities, our histories and our experiences, we are one human family,” said the Rev. Dr. Vincent Kolb, the pastor at Sixth PC, in a statement just prior to the vigil. “We gather to affirm our kinship with all our fellow human beings, but particularly tonight with the millions and millions in the Jewish community who continue to be the target for hate crimes. We gather because we are heartbroken, but we also gather to affirm our resolve that we have zero tolerance for antisemitic speech, behavior and violence. Zero tolerance. In the words of the psalmist, we want the mouths of liars to be stopped.

“Finally, we gather as a people who long for a new day and a new city when the tears of the suffering will be dried, when the reign of goodness is clear, where the creation is restored and the leaves of the tree of life will be for the healing of all peoples.”

At Grace Memorial Presbyterian Church, which is also within a five-mile radius of Tree of Life, it is preparing its response to the shooting following a heart-felt worship service on the Sunday directly after the event.

“We’re working in conjunction with whatever the presbytery and seminary are doing,” said Stephanie Simmons, the chair of the Planning Committee at Grace Memorial. “Our pastor, Gavin Walton, was really concerned with how we were dealing with the situation. We stand with our brothers in this.

“It’s made us look at ourselves and ask us what this means. Our pastor was really good at talking about us holding strong to our faith, not trying to succumb to the evils of the world. He did a really good job of that and giving us perspective.”

Sheldon Sorge, the general minister at Pittsburgh Presbytery, reacted to the shooting with not only sympathy for the lives that were lost but also a stern request for stricter gun laws.

“The outpouring of sorrow in our community has been abundant, nurturing a surging resolve to do all in our power to rid our country of the ongoing scourge of hate-filled mass shootings of innocents, especially in houses of worship,” he wrote in a message posted on the presbytery website. “This shooting, along with most mass shootings, was enabled by the use of a rapidly repeating assault rifle, which our presbytery has publicly called for legislators to ban.

“As Christians, we are called to respond to hatred with love. ‘Love your enemies!’ Jesus unambiguously commands us. (Matthew 5:43-48) Where darkness and hatred rush in like a flood, we are called to fight back with the far more powerful forces of light and peace from our Lord.” 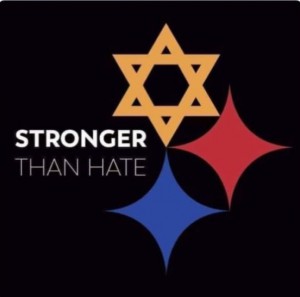 Pittsburgh Theological Seminary will host an interfaith worship service in response to the shooting at Tree of Life synagogue on Wednesday, Nov. 14, at 11:30 a.m. in Hicks Chapel. Service leaders will include the Rev. Dr. James Gilchrist, senior pastor of Westminster Presbyterian Church (Pittsburgh), and Rabbi Emeritus Mark Mahler of Temple Emanuel (South Hills). Additionally, the seminary will hold a panel discussion on Thursday, Nov. 15, at 7 p.m. in the Hicks Chapel. It will address the challenges ahead and how faith leaders can respond to these traumatic events. More details about these events are available on the seminary’s website.

Following the shooting at Tree of Life, Steve knew he had to make Riverview United Church available for the community. He had the church’s doors open for four hours, and while he wasn’t sure what to expect, he ended up having close to two dozen people show up that represented 11 different congregations from the area. It started as a prayer meeting but ended with handfuls of paper machete peace cranes being created. The cranes were then dedicated on Sunday morning and delivered to Tree of Life.

“For everyone that’s folded, that in and of itself is a physical act of prayer,” Steve added.

Of course, there is much more to do, and Steve knows that his work as a pastor who’s close to this situation is just getting started.

“We’ll be praying for them and partnering with other congregations in the Pittsburgh Presbytery as best as we can to be supportive to our Jewish brothers and sisters,” he said. “There are a lot of people in our community who are processing and trying to find meaning, and we will be in our communities trying to help people process, find meaning, connect to hope and encouraging people to be instruments of love, peace and justice here and now. We’ll remind people that in the midst of tragedy that God is at work and still working good in the midst of it.”

It might be a difficult concept for non-Christians – and even some Christians, too, for that matter – to believe that God would allow such an unthinkable thing to occur, but Steve’s strong faith gives him some measure of comfort and understanding following a horrific act like the one that occurred at Tree of Life synagogue.

“Tragedy and heartbreak are part of the human condition, but I think that throughout the narrative of scripture and throughout human history we have encountered a God who loved the world enough to be God with us, to experience not just the joy of life but also the suffering of life. I truly believe that as our heart breaks, God’s heart breaks with us. The love that we are meant to live into was ruptured on Saturday morning. God in Christ wept with us.

“In the aftermath, what we have seen is a community – not just one section of the community, but the community at-large – responding with love, responding with compassion, and being united and brought together in a way that sometimes Pittsburgh doesn’t feel like it is, where we can cross all of the lines that divide us and focus on love and compassion. I truly believe that that’s the spirit at work.

“When interfaith prayer vigils attract thousands of people, that’s the spirit moving us to healing. I do believe that God is actively at work in this community and is not done with us. This tragedy is heartbreaking, but I think God doesn’t rest at a heartbreak. God moves us towards healing, reconciliation, peace, justice and love.”