“A plan can prevent an emergency from becoming a disaster.” 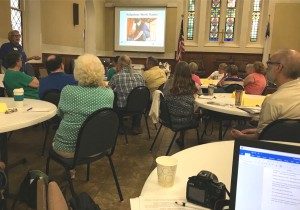 That’s the message Carolyn Thalman, a member of the Presbyterian Disaster Assistance National Response Team, gave during the first leg of PDA training programs that are being held throughout the Synod of the Trinity region in September and October. The disaster response training seminars, which are occurring in five locations and include different topics of conversation based on the needs and interests of each region, are a collaboration between the Synod and its presbyteries.

Creating a disaster plan for a church, Carolyn continued, is essential to keeping things manageable when something unforeseen happens. However, trying to convince people in your congregation that this is a necessary action can sometimes hit roadblocks.

“There’s lots of denial in churches about needing to do this,” Carolyn said. “The denial and unwillingness to do this is a big deal.”

Once the congregation is on board, Carolyn suggests beginning with individual and family preparedness before diving into a church plan.

When this step has been completed, that’s when it’s time to begin work on the church’s plan, a process that begins with recruiting the “right people” to spearhead the work. Carolyn suggested starting with these three people: a person who has a passion for disaster ministry, one who likes to keep notes and someone with persistence to make sure the work continues to get done. After the groundwork is done, other core people can then be added.

“You should create a task force of key people according to your congregation’s culture and tradition,” Carolyn continued, adding that people like the properties and facilities elder, custodian, secretary and treasurer would be good fits to have on the disaster plan writing team.

Once the writing part begins, some basic elements include an evacuation plan, a strategy to care for affected members and a review of insurance coverage. But one of the most important things is to have a plan for the continuation of the ministry of the church should something happen to the building.

“What do you do if something happens on a Saturday?” asked Gail Farnham, also a member of the PDA Response Team who was part of the day’s speakers. “You don’t cancel worship on Sunday.”

Also consider creating digital backup files for your church’s records that can be taken home on a regular basis, Carolyn said, as well as having a communication plan that reaches out to those in your congregation.

“Do you have a plan to check on all of your members to see if they have been affected?” Carolyn continued. 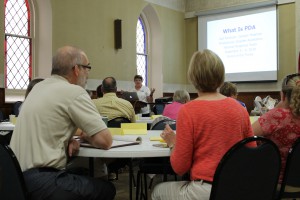 Presbyteries, like congregations, can also benefit from having a disaster preparedness plan in place. However, only 12 presbyteries of the 172 that are in the Presbyterian Church (U.S.A.) have such plans, and six of them are in Florida, Carolyn said. A presbytery plan should include a designated disaster preparedness/response team, an outline for response to a disaster event and a communication plan to help get the word out about the situation and the needs of the area. The presbytery should also have plans in place for their facilities and their congregations’ buildings as well as ways to educate them on proper disaster preparedness.

Training is available through the national Presbyterian Women’s organization and resource sheets can be found on the Mission Presbytery (San Antonio) and the Presbytery of New Covenant (Houston) websites. (This page contains training materials and resources for PDA-certified PW Trainers for disaster preparation in mid councils and churches.) Requests for PDA assistance for congregations must come from the church’s presbytery executive.

On a broader scale, PDA responds to natural, human-caused and technological disasters in the United States, works with domestic and international refugee needs, and is trained for international natural disasters and humanitarian crises. The U.S. response teams of PDA are made up almost primarily of volunteers who do debris cleanup, mucking out, rebuilding and other disaster recovery work. These same volunteers also provide a “ministry of presence.”

“The role of PDA is to support the local effort when local and regional resources are overwhelmed,” Gail explained.

Disasters can come in all shapes and sizes. The difference between an emergency and a disaster is that the former is “an event the community can manage itself” while the latter is something that “overwhelms local resources.” Then, there are natural and human-caused disasters that have their own unique qualities, which were spelled out by Suzanne Malloy, a third member of the PDA Response Team who was on hand for the training.

Suzanne said that a community will feel differently after a natural disaster than after a human-caused one. For instance, following a natural tragedy, there is a heightened sense of community as everyone rallies around those affected. The community’s involvement is usually spontaneous and generous. However, after a human-caused disaster, there is a feeling of lost individual freedoms, she said, and sometimes a loss of relationships as people are worried about going about their daily lives. As time progresses, there is greater apathy in neighboring communities and hostility can occur as the search for the culprit continues.

There is also a need to know yourself, your community (or congregation) and your neighbor after a disaster. It’s important to understand the dynamics and needs of the people around your church, Suzanne said. She added that knowing how many people your church building can house and feed for 72 hours if it is needed as a shelter is important information to be aware of.

“A traumatic event reconfigures the imagination, affecting our ability to tell stories about ourselves and our world that are life-giving and lead to our flourishing,” Suzanne said, quoting an author.