Beaver-Butler Presbytery will always be part of Adams’ family 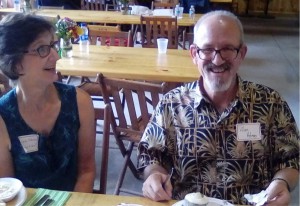 Carla and Alan Adams enjoy a moment during Alan’s retirement celebration. Alan spent 14 years as the executive presbyter at Beaver-Butler Presbytery before retiring at the end of July.

Alan Adams applied to be the executive presbyter in Beaver-Butler in 2004. At the time, Alan was still in his first call at a congregation in Louisville. After hearing about the opportunity in the presbytery, and “accidentally” eating at a diner across the street from the presbytery office while on vacation, Alan decided to submit his name for consideration. During a process in which he received several sets of “supplemental questions,” he withdrew his name to pursue his D. Min at Pittsburgh. He thought that was the end of it.

A few months later, Alan learned that the search committee had gone through the whole process just to have their candidate withdraw at the last minute.

“I got this call, so I said, ‘Put my name back on the list,’” Alan recalled. “It all seemed very providential to me. It’s almost like I couldn’t get away from it.”

Alan was eventually called to be the presbytery’s fifth executive in seven years. Due to that quick turnover of executives, a few pastors told him point blank that he would only last about 12 months. Fourteen years later, Alan has carved his niche into the western Pennsylvania presbytery, turning what was a region divided by denominational issues into one that is now in harmony. It’s a success story that Alan will carry with him into retirement, which began at the end of July.

Alan and his wife Carla will be heading to Florida in September to help care for Alan’s aging father. Alan has already reached out to the local presbytery executive there to let him know that he’d be available for pulpit supply or even to fill an interim position. Being able to preach on a regular basis is one thing he really enjoyed during his time in Beaver-Butler.

“I will miss being in a different church every week,” he said. “I preach in one of the presbytery’s churches every week I am in town. For me, that’s the relational piece.

“One of my goals when I came into the presbytery was to know more elders than clergy. It’s easy for executives to get isolated and know all the clergy and to be familiar with the elders who show up at presbytery meetings. One of the things that was different for me was that I was in churches so much that I got to know many, many elders personally. That was important to me.”

A graduate of Louisville Theological Seminary, Alan was a second-career pastor, worked in real estate and owned a detective agency before pursing his call to ministry. His first call as a minister was spent at a congregation in Louisville where he spent eight years.

“I had business experience in the past,” Alan said, reflecting on his leap from first-call pastor to executive presbyter. “I was an entrepreneur and owned a couple businesses. That experience contributed well to my work when I became an executive presbyter. I’ve always worked well in situations where people have found it difficult to function due to conflict. That was the case when I began both of my calls.”

That experience set the stage for Alan’s eventual move to Beaver-Butler.

“I came into a very high-level conflict,” he recalled. “I wanted to come in and bring peace to that presbytery. We’ve had several churches leave the denomination during my term, but as I and the presbytery leadership look back, we believe that that was a necessary step in order for us to move forward.

“In the past the role of an executive presbyter was mostly administrative. During my time, the role of an executive presbyter became much more relational. So, I spent an inordinate amount of my time in the churches, and I had a good relationship with churches on both sides of the theological spectrum. Over time I earned trust and was able to help each of the churches negotiate their way to a solution.” 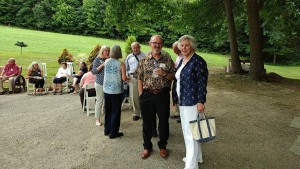 Alan Adams chats with Jane Lavender during his retirement party in late July.

In Alan’s opinion, the role of executive is, “to make sure that everyone within the system treats one another fair. Without a trusted person in a system to call them on that kind of stuff, they often won’t. That was the influence that I had that helped them get over much of the conflict.”

Alan is also pleased that during his time in Beaver-Butler a New Worshiping Community was established in Aliquippa that provides a weekly worship and meal to those in need.

“Refreshing Springs Ministry is a new thing for Beaver-Butler,” Alan continued. “For the first time ever, we have a racial-ethnic congregation within the presbytery. I worked on that for years trying to make it happen. Eventually God honored our effort and it fell into our lap.”

Looking beyond his time in Florida, Alan can see himself landing in a more remote part of the country. In 2015, he spent six weeks in an isolated part of Alaska serving a small Presbyterian congregation there. Last year, he spent three months in rural Colorado filling in for a pastor who was on sabbatical.

“I think I’ve got a few years left in me where I might consider a transitional or interim position of some type,” Alan said, “something of that nature.”

In Alan’s absence David Oyler, the general presbyter in the nearby Presbytery of Lake Erie, is filling the day-to-day operations of the presbytery on a part-time basis. With Ralph Hawkins, the executive presbyter and stated clerk at the Presbytery of Shenango, also moving on, conversations are being had about those two regions sharing things like staff. If you ask Alan, the concurrent vacancies in the two presbyteries are more than coincidental.

“It’s providential,” he said. “It’s been God’s timing all along.

That’s the theme that continues to crop up in Alan’s life. And he’s happy to follow the script that has been laid out before him.

“Even as I approach retirement I’m asking myself this question: ‘What is God Calling me to do now?’ At the moment I believe the right thing to do is to go and care for my father. I also think it is the right time to let go of the reigns to allow Beaver-Butler to discover its new future. To me, this all looks very providential.

“I think it’s time for somebody younger in the presbytery. I think that’s providential. I think the timing on my father needing help is providential. God’s hand has been leading my ministry from the beginning. That’s why I’m so confident. Whatever’s next, I’m not really worried about it because I’m sure God has plenty for me to keep doing.”