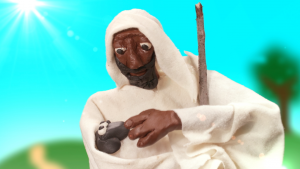 We’ve all heard the Bible stories of Noah, Jonah, Moses and Joseph. But have you heard the ones involving Wilbur, Spitz, Rufus and Shem?

Presbyterian Media Mission, which is based out of Pittsburgh Presbytery, is in the process of creating animated children’s stories that are told from the views of animals that play prominent parts in the scriptures. There’s Wilbur the Wolf (Isaiah 11), Spitz the Sparrow (Matthew 10), Rufus the Rooster (Luke 22) and Shem the Sheep (Luke 15).

Gregg Hartung, the director of PMM, estimates that there are between 50-70 different stories that can be created using clay animation effects. To date, only Shem the Sheep, which details the story of the lost sheep, has been completed and is available for use in churches. It has already been used for a children’s sermon, in Sunday school and as a tease for vacation Bible school.

“These are stories in the Bible where there’s an animal somehow in the context of the story,” Gregg added. “It’s all in rhyme and poetically put together.”

While it would be easy to create these videos surrounding the stories of Jesus’ birth and resurrection, Gregg’s vision for the “Animals Talk Project” is to better publicize the lesser-known events of the Bible.

“We’d like to put together a series of these different stories,” Gregg said. “I know people are tempted to do the Christmas story or the Easter story, those are pretty familiar stories. We’re kind of looking for some of the unfamiliar stories of the Bible that can capture people’s imagination about different parts of the Bible that maybe they haven’t given as much attention to in terms of at least the animal character.

“The goal is presenting the unfamiliar stories and the idea of helping people have their imagination be engaged in Biblical literacy,” Gregg continued. “It shows that there are more stories in the Bible than the Christmas story, the Easter story and ‘The Lord is my shepherd.’ We’re trying to get people more familiar with the books of the Bible and the characters of the Bible to expand people’s understanding of Biblical literacy. We’re starting at a younger age so kids aren’t hesitant about the Bible, that they can have fun with it and the characters that are in there.”

The scripts for several of the other videos have been written, they just need to be transformed into the clay animation. That process takes several months to complete and is also costly, factors that have led to the one-at-a-time approach being taken by Gregg for this project.

“PMM did the first one as a pilot on its own,” Gregg said. “We’d like to find partners or people interested in some of the underwriting to help make that happen, so it’s not necessarily all on PMM’s shoulders to create the stories and have them available for the churches.” 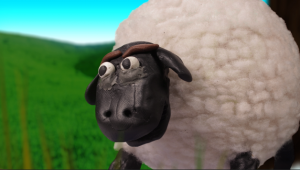 Gregg came up with the idea for creating these animated videos after seeing the Rev. Aland Smith, a former PMM board member and now retired minister, present his children’s message on Sunday mornings using drawings of animals to tell his story. Gregg approached Aland about working together to produce similar animated videos, and with the help of Gus Danko, a member at Calvin Presbyterian Church in Zelienople, PA, who has a background in animation, the three were eventually able to put together the “Shem the Sheep” video.

“We use a simplistic approach in terms of not too many characters in it so it won’t be too complicated for the animation,” Gregg added.

Gregg estimates that since the video was made available in the summer of 2018 that over a dozen congregations have used the “Shem the Sheep” video as part of their worship.

“The response has been good,” Gregg said, “especially where video screens in sanctuaries are available. We are able to use the scripture to talk to the kids about what it means to be jealous, what it means to be lost, all those things that are wrapped up in that lost sheep parable.

“I’ve seen adults react to it just as favorably as kids, or they become kids themselves. They hear the rhyme and start to chuckle. It goes across the age groups, but it’s geared toward trying to help people be more involved in scriptures and also the interpretation of scripture.”

It all adds up to a unique way to educate both the young and old about some of the lesser-known sections of the Bible.

“It’s an interesting endeavor,” Gregg said. “It’s focused on children and youth, but I think adults get a lot out of it, too. It can be a nice catalyst for Biblical literacy and different things that are all issues in terms of the church and education.”

Note: To learn how to become involved in the “Animals Talk Project,” contact Gregg by email at gregg.hartung@presbymediamission.org.