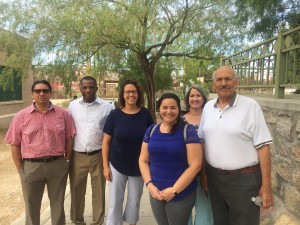 The delegation from the Presbytery of Philadelphia that traveled to Texas to experience life at the southern border are, from left, Adan Mairena, Randy Barge, Samantha Hudson, Megan Acedo, Susan Krehbiel (from Presbyterian Disaster Assistance) and Vijay Aggarwal.

In September, five members of the Presbytery of Philadelphia’s Leadership Collegium traveled to El Paso, TX, to get a firsthand look at what is occurring at the southern border of the United States. For 700 miles along the Mexican border, fencing has been erected, and in other places there are vertical barriers, all intended to reduce illegal immigration to the United States from Mexico. According to a recent report, nearly 1 million migrants have been taken into custody along the U.S. southern border in 2019. For some, it has resulted in unspeakable living conditions for those detained, and mothers and fathers being separated from their young children.

“One of the things we value about who we are as a presbytery is our diversity,” said the Rev. Kevin Porter, the stated clerk of the Presbytery of Philadelphia. “This includes our diversity of thought on the issues of the day. As such, we thought it vital to send a cross section of our own people to be our eyes and ears, unfiltered by the partisan news media. They were then commissioned to come back to share their hearts, minds, questions and faithful imaginations with us. In this way, we will be able to discern and decide how to respond in light of our Christian discipleship and witness to the gospel. We look forward to the conversations ahead, especially after our delegation shares as a part of a fishbowl conversation at our upcoming November stated meeting.”

The presbytery partnered with University Presbyterian Church (an approved Presbyterian Disaster Assistance site), a representative of PDA and a local approved organization in El Paso (Abara Frontiers), who guided the delegation through conversations on both sides of the border. Among the many conversations they were engaged in included those with border patrol officials, asylum seekers and residents of shelters in Juarez, Mexico. A Synod of the Trinity Mission Travel Grant assisted the delegation on the trip.

View a video recap of the trip by clicking here.

“As a people committed to respond to the teachings of Jesus as clearly expressed in Matthew 25 – ‘Truly I tell you, just as you did it to one of the least of these who are members of my family, you did it to me,’ we believe it is important not only to speak on behalf of our neighbors who cannot speak on behalf of themselves, but also to learn through first-hand encounters and shared stories,” a statement from the Presbytery of Philadelphia says on its website. “In so doing, we can faithfully and responsibly discern possibilities to bear witness to the gospel in our time and place, near and far.

“This was an exploratory vision trip to ‘encounter and see with our own eyes’ the realities plaguing our southern border.”

For more resources, including a photo gallery, click here.

What follows are brief recaps from the five members from the Presbytery of Philadelphia who took part in the trip: 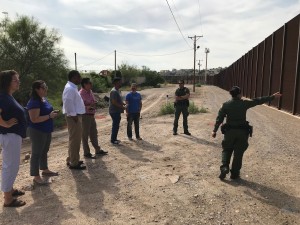 One of the things that touched me was the memorial wall of placards and flowers left in response to the tragic shooting in early August that took that lives of at least 22 people. It drove home for me the belief that much of our current immigration rhetoric is steeped in fear and hatred of people who are different from us. But seeing all the expressions of sympathy and love at the memorial wall helped to affirm my belief that the forces and powers of hatred and fear do not have the last word.

Throughout our stay, we met people, most of them young people, who are committed to bringing the love and justice of the Kingdom of God to bear in their care and concern for asylum seekers and others. We met people like the young college student giving a year of her life as a volunteer at the Oscar Romero shelter in El Paso. We met people like the Presbyterian pastor and his son, both Mexican nationals, whose church, despite its meager resources, sponsors a shelter for asylum seekers forced to wait in Mexico due to a recent change in U.S. policy. And, of course, we were hosted by a wonderful group of young people from Abara, who helped us to make sense of much of what we experienced at the border. I was deeply touched and inspired by all of them.

As I reflect on our trip to the border, I am struck by how well-intentioned people and well-intentioned policies have unintended consequences for those who are seeking safety in our country. While talking to border patrol officers, their view is placing detained children in open cells or cages is the best way to ensure their safety. However, when we see those images, they seem inhumane and unjust and undoubtedly leave long lasting emotional scars on those who are detained.

While in custody, the immigrants’ belts and shoelaces are removed to prevent the possibility of unintended or self-inflicted harm. When those individuals are released in Mexico to await their trial date, the drug cartels target those who have sagging pants or untied shoes. Since these individuals are often without sufficient resources, they are vulnerable to victimization by cartels in Mexico.

While every country has the right to defend its borders, the recent expansion of Expedited Removal allows agents of our government to stop anyone without cause and initiate deportation if they cannot prove that they have been a legal resident of the U.S. for more than two years. I am not sure any one of us could provide that level of documentation in a random search and yet, these individuals are subject to removal without any further court action.

Although there are some who feel these policies will deter immigration in the first place, it seems to me that anyone who has made the decision to abandon their home and family, sell all they own and risk their lives in a long and uncertain journey will not be deterred by these actions. What does occur is the imposition of additional trauma in an already tragic situation. As we contemplate the balance of law and order and our Christian call to grace and compassion for the stranger in our midst, I hope we keep the unintended consequences central to our prayers. 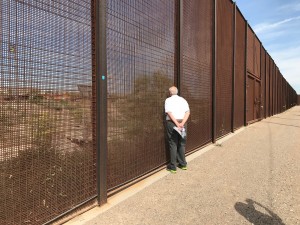 The land border wall is overwhelming. To stand in its shadow made me feel small. It is massive, sturdy and goes on forever. It is a clearly identifiable construction that runs down the middle of this one metropolitan area of Juarez, Mexico, and El Paso, TX.

But here is the thing: it is built on U.S. soil. The Rio Grande is the internationally recognized boundary, and then there are 10 feet of U.S. land, and then a canal, and then 10 feet of more U.S. land, and then the wall. So, it is not functional. Migrants technically can come to the wall and shout “asylum” through it, and Border Patrol would have to go, bring them over, and process them. And, as Border Patrol agents admitted, it will not indefinitely prevent “illegal” crossers either. There is always a way through; it is simply a deterrent, designed to slow them down and give Border Patrol time to catch them.

The wall is not functional. It is symbolic: of a desire to create barriers and define who is in and who is out. And it is overwhelming to see such hatred so plainly manifest. The work that we need to do is about the walls in our hearts and in our own communities. That is where we start.

I have come back from the borderlands with a shattered heart. It is broken in pieces over the systems that perpetuate separation and pain, over the stories of people I talked with, over the ways in which we as human beings talk past each other in order to justify the presence of a massive barrier between two countries. I have struggled to find the Good News in this story, to see how God is reconciling the world to God’s self and us to each other.

The one piece of Good News I can see right now is in God’s people, committing themselves over and over again to hard conversations, to caring for beautiful immigrant babies, to seeking out justice and peace even in a time and place where those ideals seem far away. People like Sami, Liza, Bethany, Claudia, Blanca, Gustavo, Keisha and so many more. I cling to this verse from Psalm 147, because I need to be reminded, even in the midst of brokenness, God is at work binding up our broken hearts and calling us to bind up broken systems of oppression, to love fiercely, and to pursue justice, wholeness and peace.

They looked fit and light-skinned, as if they were in their early to mid-20’s. They also had two little girls; one looked about 3 and the other was at school.

“We are from Progreso, Honduras, and have been here (in Pasos de Fe, a migrant shelter in Ciudad Juarez, Mexico) since April,” they shared with me. “Our next court date is in February of 2020. We left Honduras to escape the gang threats. I was not in a gang at all. My wife got into a fight with a woman from a gang and a man jumped in and I had to jump in to protect mi mujer (my woman). The gang started putting death threats on our door, that they were going to rape and kill my wife. We warned not to go to the police. We did. And immediately as we left the police station the gang found out – our house was burnt. The police and the gangs work together.

“I got our two little girls and my wife, and we left with just clothes. We spent 12 nights under a bridge in Tapachula and eight nights under a bridge in Mexico DF. We made it up here and were at another church, but they had a time limit as to how long we could stay. We came here and it is good. We can stay as long as we want and there is no pressure. Everyone cooks their own meals because we all have our own foods. The Cubans eat how they eat, and the Mexicans also make their own food. Their cheese here isn’t as strong as ours but I have found some. We go to the centro and buy it. We found a school and registered my daughter. Our final destination is Tampa, FL. I have family there and we talk often. They are waiting.”

As I left them, I was reminded of a young couple about 2000 years ago fleeing to Egypt in hopes of saving their newborn’s life. 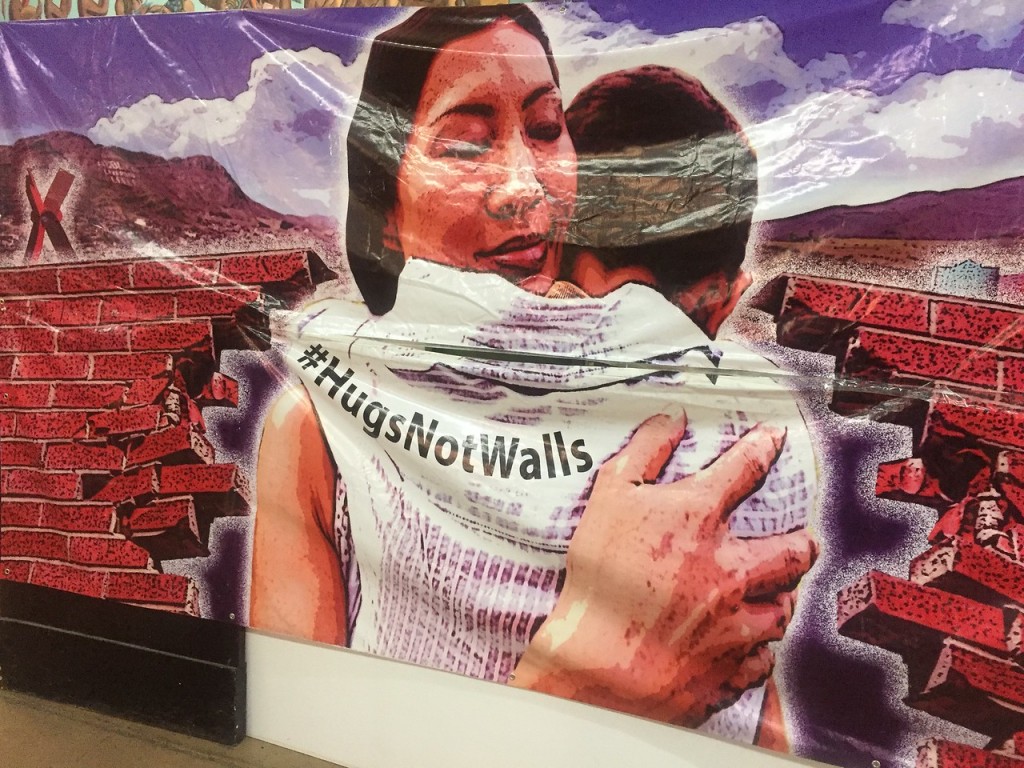