Rev. Harry Johns, 80, had a heart for service in the church and community 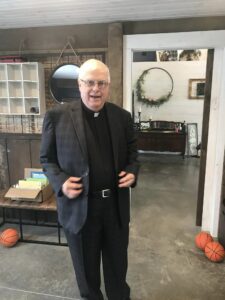 Rev. Harry Johns served as a church pastor for 55 years, most of which occurred within the bounds of the Synod of the Trinity.

For 15 years, the Rev. Harry Johns drove an hour each way to serve the Adamsville Presbyterian Church in northwestern Pennsylvania as its part-time pastor. This routine started in 2008, just three months after he was honorably retired from the Presbytery of Lake Erie at the age of 65.

“It was an effort. It wasn’t just the convenient, easy thing to do. He not only served that church, he drove down there. It wasn’t right next to where he lived.”

The call in Adamsville was the fourth and final one for Harry, who passed away on New Year’s Eve one month after celebrating his 80th birthday.

“He was serving at Adamsville Presbyterian, still, on the night he died fully intending to lead worship there the next morning,” Anita said.

“There was a positive spirit in the life of the church,” added the Rev. Dr. David Oyler, the Presbytery of Lake Erie’s general presbyter of 17 years prior to retiring in 2020, “and they appreciated him deeply for his willingness to drive that distance and serve them on a part-time basis.”

Harry’s ability to connect with people in and out of the pulpit is what made him special.

“He was quite theological at times and used theological themes and theological words that might sound a little foreign to many folk,” David said. “He tried to make theology practical and down-to-earth for people. He would use words not as a sense of arrogance but as a sense of trying to explain the different themes of the Christian faith.”

Harry’s service wasn’t limited to work in the church as he also served on many committees and commissions at the presbytery level, including a year as Lake Erie’s moderator, a role he greatly cherished. For the Synod, he was a commissioner from 2015-20 and was also a member of the mid council’s first Governing Commission in 2016.

“He stayed active, and he was the kind of person who cared more about the ministry than he did his own ego,” Anita said. “He served faithfully all those years in our presbytery. He was a great example of consistency and faithfulness over a long span of time, and that was inspiring to people in the presbytery. He was someone who cared about the ministry and cared about people and not so much about who was recognizing him.”

Harry branched out ecumenically through his work as chaplain for the City of Erie Fire Department, a chaplain for VNA Hospice of Erie County and Inter-Church Ministries of Erie County, being active with those organizations for 30 years. 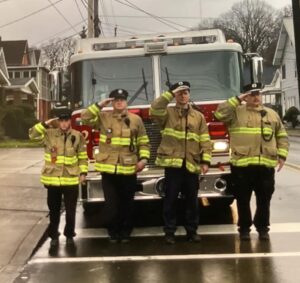 City of Erie firefighters stand at attention while blocking traffic at an intersection during a funeral procession for Harry Johns. (Photo courtesy of Kathy Hough)

“He had a great passion for connecting with people,” David recalled. “He was always wanting to be out there, always talking and engaging with people, always had the time of day for anyone who wanted to talk with him about something. That made him to be a very empathetic figure for many, many people in the church as well as those beyond the church.

Due to Harry’s service as the chaplain for the Erie Fire Department, many firefighters turned out for Harry’s memorial service, serving as honor guards and pall bearers while blocking intersections and giving one final salute to Harry during the funeral procession. Normally, the honor guard is changed every 30 minutes, but because of the amount of firefighters who wanted to be involved in honoring Harry, that time was changed to 15 minutes.

“He had such a heart for being a pastor to the community,” David said. “He officiated many, many both weddings and funerals across the years because of the connections he made with people in the community far beyond the congregation he served.”

“He had a real sense of community and being a part of the community,” Anita added. “He encouraged the churches that he served to also be engaged in the community.”

Harry had deep roots in western Pennsylvania, having been born and raised in Pittsburgh and then eventually serving congregations in that part of the state as well. He was an only child, but had four children with his first wife Marlane before marrying Diana in 1989 and gaining five more children, giving him a large family to cherish. Among his children is the Rev. Ellie Johns-Kelley, who serves most of the Synod region as a Ministry Relations Officer for the Presbyterian Foundation. She is also a current Synod commissioner from Lake Erie.

In early December, many family and friends turned out for Harry’s birthday celebration at Elmwood Avenue Presbyterian Church where he served for 30 years and was the pastor emeritus from 2008-22. 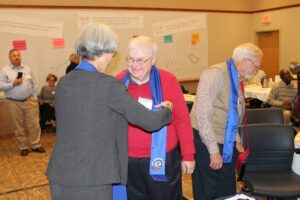 “He said to me during that party, ‘This is so much better than my funeral’ because he got to be a part of it,” Anita recalled.

That dry wit was one staple of Harry’s personality that anyone who knew him picked up on quickly. That, and his dedicated service to the church and the community are what set him apart. Despite all of Harry’s service and giving toward others, he still had time to be a friend as well.

“He was genuine as a person,” Anita said. “He was willing to be a real person and not just a pulpit presence. He had a marvelous sense of humor. He drove a cobalt blue convertible – a jazzy sports car – something that wouldn’t be practical for snow territory, just something that was fun. He was someone where you couldn’t tell a lot of difference between the person who preached on Sunday morning and the person who lived in the world the rest of the week. He wanted to be real and genuine.

“He was a good, solid guy. He was genuine and a faithful servant to the Gospel. He was really interested in being in meaningful ministry until the very last moment.”

The Synod of the Trinity is thankful for Harry’s work and service to the region and sends condolences to his family and friends.