Sewickley joins with community to ‘Save the Pink House’

Sewickley, PA, no longer has its landmark “pink house.” But thanks to the work of the Sewickley Presbyterian Church and other neighbors, what had become a beloved but rundown building is now a like-new structure that will be used as a youth fellowship and education center as well as extra meeting space to continue serving the Sewickley community. 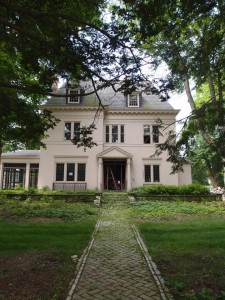 The color of the ‘pink house’ was distinctive and a landmark in Sewickley, PA. The community joined with Sewickley Presbyterian Church to save the structure from the wrecking ball.

The Coyle family, which were members at Sewickley PC, owned the house that sits in the adjacent lot to the church building. Known as “the pink house” because of its color, the building has undergone a complete renovation and been given a new, gray paint scheme. While it will re-open in late April, the fact that the building is standing at all is a slight miracle considering the Sewickley PC congregation originally had plans to demolish the structure after purchasing it in 2012.

However, the community pulled together to “Save the Pink House,” raising awareness and more importantly funds to help keep the building upright. The project recently garnered Sewickley PC and the “Save the Pink House” group the Citizens of the Year award for 2014 by the Sewickley Herald newspaper. It’s been a miraculous turn of events for the house and for those involved in the entire process.

“We received quite a bit of flack early on from some people in the community about our initial plans,” recalled the Rev. Kevin Long. “The local paper was not very friendly toward us either. And the fact that our church has now been named Citizen of the Year by that very same paper is about the clearest evidence that the Holy Spirit has been the one directing this process.”

Two key people in the project from the Sewickley PC side of things were Nancy and Tim Merrill, long-time members who were part of the planning and decision-making, although they are eager to credit the vision of many church leaders in making the project a reality. They were also quick to point out that even though the project took several turns it ended up going in the right direction.

“I think when God gets involved you never quite know where you’re gonna end up,” Nancy Merrill said with a chuckle. “You try to be faithful and you try to listen and you try to do your part – working hard and putting the plan together and making it work. We started out going in one direction and we ended up in another. We really believe it was just the work of the Spirit.” 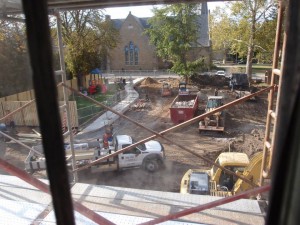 Sewickley PC is located adjacent to the ‘pink house,’ making the property valuable to the church for off-street parking and a new youth center that can also be used as a community meeting space.

Located on Beaver Street – the main thoroughfare of Sewickley – the “pink house” is not a historical house but it was a landmark due to its color. Since its construction in the 1850s, only three families have owned the house, and the second owners during the early part of the 20th century decided to paint the house pink for an unknown reason. The Coyle family eventually bought the house in the late 1950s and continued to repaint the house pink.

With the “pink house” property for sale three years ago, the congregation decided to purchase this lot for the purpose of adding off-street parking as well as erecting a youth center to replace a deteriorated youth building that had been on Sewickley PC’s own property. The original plan called for tearing down the dilapidated “pink house” to make room for the parking lot and new youth building, but that didn’t sit well with the community, which didn’t want to see its beloved landmark be torn down.

“I voted against the motion to actually buy the house and tear it down,” Tim Merrill said, “because I was concerned about the amount of time it would take in Sewickley for the approval process to take place to build a new structure. I was in the minority, and we went ahead with the purchase.”

As the church looked into keeping the “pink house,” the expense to get it up to code for a public youth structure was very expensive – and it was more space than was needed – so the decision to demolish it was made. (It actually cost over $800,000 more to refurbish the house than to demolish it and build new.) As word spread throughout the community about the church’s plans to take down the house, strong opposition arose and a “Save the Pink House” initiative was born.

“All of a sudden these little pink signs began to appear in our neighbors’ front yards that said, ‘Save the Pink House,’” Nancy Merrill recalled. “They developed a website, and people were signing an online petition.”

“It went viral,” Tim Merrill added. “We had people signing the petition from California.”

“There was community reaction, and it was strong and swift,” Nancy Merrill continued. 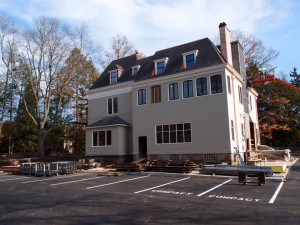 Work is nearly finished on the ‘pink house,’ which now sports a gray paint scheme.

Despite having a demolition permit, the decision was put on hold for 60 days so that a community meeting could be held. About 200 people showed up to express their thoughts on the project, and after the meeting Sewickley PC’s session voted to refurbish the house if enough money could be raised. The entire construction project was estimated at $2.7 million to renovate the house, create off-street parking and provide lighting and landscaping. The church launched a capital fund drive, of which $200,000 was donated by members of the community.

“It was not our original plan but it’s sort of a story of the movement of the Spirit,” Nancy Merrill said. “We began to say, ‘Maybe we’re being pushed in a direction we didn’t think we wanted to go.’ Some people said we shouldn’t bow to community pressure and others said, ‘Well, maybe there’s something else going on here.’”

Tom Graham, the chair of Sewickley PC’s task force to repair the house, personally met with some stern opposition from the community. One man threatened a lawsuit if the house was torn down, but after a conversation with Graham and another elder, he reversed his position and actually was part of a group that donated $200,000 to the project. Despite the donation, this man did not want to have a say in the programming that would occur in the house.

“I was skeptical that people living near a church to which they did not belong would actually give money to the church with no strings attached except that it must be used to preserve a building the church owned,” Graham said. “However, it was a new idea, and the thought that there could actually be a joint effort in renovating the house with a group which had been fiercely opposing the church so far had a powerful appeal to how Christians should behave.

“When the local Sewickley Valley Historical Society stepped forward unasked to offer to act as the nonprofit conduit for the community-raised funds, and themselves made a $10,000 contribution, the sense that the Holy Spirit had led us in a different path to a better result was felt by most of us involved in the project.”

The ability for Sewickley PC to be able to change its mind and hear outside voices and concerns was not lost on Rev. Long. 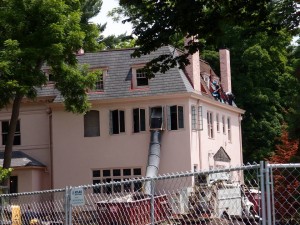 Work begins on the ‘pink house,’ which was unmistakable in the Sewickley area.

“This whole project has been a great lesson in paying attention to the movement of the Holy Spirit,” he said. “When we first got into it, we were moving forward with a plan that seemed to make sense, which included tearing down the house. But it was a plan that was based on a vision from several years earlier. And I don’t think we really took the time to discern whether that was still the right way to go. But when some people in the community started speaking with us about the symbolic significance of the house, our elders decided to step back and spend some time in prayer and discernment.

“And I am so proud of our elders for being faithful enough, and humble enough, to wait for a word from the Lord rather than run forward with their initial plans. When it became clear that God was leading us in a different direction, they had the courage to follow where the Spirit was guiding us, not even knowing for sure if we could make it work.”

Plenty of legal red tape has ensued, but when the doors swing open in late April, the church’s youth and members will have a new place to gather. It will also house community programs like Alcoholics Anonymous, the Boy Scouts and book clubs.

The color of the “pink house” has been changed to gray in order for it to better match the adjacent Sewickley PC building and also to show that a transformation has occurred with the property. The community has openly adjusted to that change, creating a strong bond between the church and its surroundings the way it’s meant to be.

“Ultimately, we believe that we have found the best win-win situation for the church and the community,” said Rev. Long. “After all, the church is here for the community. We are here to be witnesses to Jesus Christ and demonstrate to our community what the kingdom of God is all about. And I believe the community has begun to see that. In fact, one borough official said recently, ‘Your church has shown this community what it means to be Christian.’ Thanks be to God.”

Note: Sewickley PC member Wayne Murphy was also named the Sewickley Herald’s Man of the Year. While his work is not directly related to the church, he is active with the community’s library, is the mayor of a local community and serves on the area’s arts center board. Read about him here.