Martins Ferry, Ohio, sometimes takes a backseat to its bigger brother on the other side of the Ohio River – Wheeling, WV. You see, because Wheeling is larger population-wise, it can often attract the bigger names when it comes to things like entertainment. But thanks to the Holy Grounds Café, that gap has shrunk, especially in terms of the quality of music that can be heard on a weekly basis in the small river town of Martins Ferry. 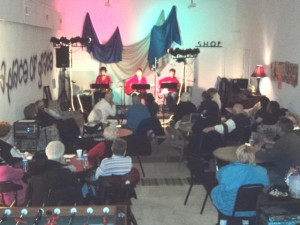 A crowd settles in to hear a performance at the Holy Grounds Cafe in Martins Ferry, Ohio. The cafe is a product of Grace Presbyterian Church.

The Holy Grounds Café is the brainchild of Grace Presbyterian Church in Martins Ferry, treating people to fine, local music on Thursday nights since 2011. During the two-and-a-half-hour sessions that are held weekly during the winter and spring seasons, one hour is dedicated to “open mics” and the final 90 minutes consists of an invited performance from an area band or musician.

Lisa Buckingham, the Family Ministries Coordinator at Grace PC, is behind the Holy Grounds Café and describes it as an “outreach and a mission” of her congregation. Inside the building, which is located next door to the church, one will find a coffee-house venue with live music that is populated with families and people of all ages. Goers will also find Christian-based themes, but they are subtle and far from pushy and overwhelming.

“It is not a worship service,” Lisa said. “It is not a hymn sing or anything like that. And we are very intentional about it not being too much like church, but we also are quick to make the connections. Every week when I welcome everyone I say this is a ministry of Grace Church and I work for Grace Church and we would love to have you be part of everything that we do. We’re just trying to build some connections back and forth.”

Available for purchase are coffee and sodas (or “pop” if you live in that area) as well as chips and sweets at a snack counter. Baked goods have also become a regular feature as of late as well. The suggested donation is 50 cents per item, but if someone has less, that will also be accepted.

Normally the open-mic portion of the show includes performances with musical accompaniment, but sometimes it’s just someone singing with recorded music as the backdrop. This slot rarely includes dancing or any other kind of performance like that. As far as the talent that has been invited in, there have been many styles portrayed at the Holy Grounds Café.

“We ask our musicians to prepare an all-ages show. Our stage is not a platform for making political statements or strong opinions about thus and such. This isn’t your place to come and tear someone down.”

With the growth of the Holy Grounds Café has come interest in playing there. Lisa, who works with her musician husband, David, on the project, says she now receives requests from performers to play at the café even before she begins the booking process, a sign that what is being done there is positive.

The pastor and worshipers at Grace PC also play an important role on that positive effect. While they are mingling around they are urged to let people know that they are affiliated with the church and are available to take questions about what Grace PC is all about.

“We want to use it as a doorway to furthering people’s faith journeys,” Lisa said. “’We’re so glad you’re here. Come next door and see us on Sundays.’ It’s just a really nice way to make an introduction to faith-matters safe, or not as scary, or not as preachy.”

On an average night, around 40 people will turn out to hear the performances at Holy Grounds Café, a figure that grows to between 50-60 on a good night. In the beginning, less than 20 people turned out, but as word has grown, so has the amount of people coming through the door. 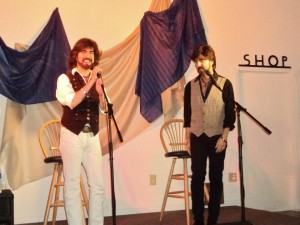 “The original thinking was that this would be something for teenagers or young adults,” Lisa said. “While those teenagers and young adults are present, it is definitely mostly adults who are there. It doesn’t skew older or younger in our general population. It has more of an adult feel.”

Because of the original youth target for the café, Lisa was the obvious choice to spearhead the idea. And the fact that the audience has turned out to be more varied hasn’t decreased her enthusiasm one bit.

“Trying something that is all-ages and has a high focus on adults is really neat,” she said. “I love having a venue that the public can come to where there is a strong Christian presence but it is not scary to unchurched people. Someone who might be anxious or nervous about going to a worship service or going into a church building even… we can offer them Christian witness, a place of safety, a place where they are welcomed. And hey, by the way, the reason that we behave this way is because we know the Lord and we would love to help you to get to know him, too.”

With Grace PC owning the building – which is also used for other church-related activities – the cost to run Holy Grounds Café is minimal. The change collected for the snacks goes back into buying more food and drink the next week. A donation hat is passed nightly, and that money goes toward helping to pay for the invited musicians, which receive a minimal amount of $50 to perform for 90 minutes. 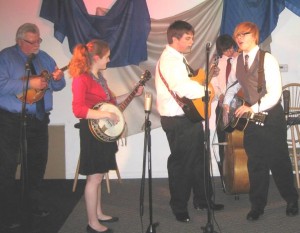 Entertainment of all types graces the Holy Grounds Cafe in Martins Ferry.

“Because we are established now, people have been giving very generously,” Lisa said. “We are well on our way to being comfortably independent.”

Not only is the café nearly self-sufficient, it is definitely growing in popularity as well, despite its proximity on the “other side of the river.”

“We are on the side of the river that does not get as many big names,” Lisa said, explaining the relationship between Martins Ferry and Wheeling. “We’re a small, river town. A lot of the bigger entertainment and music stuff happens across the river in Wheeling. To get Wheeling folks to cross the river and come to Martins Ferry is kind of a big deal. People come out for it, and they’re telling their friends and they’re bringing their friends and they’re rearranging their schedules so that they can come to the coffee house. We’re a thing. That has been delightfully surprising.”