March 2015 Rhythm of the Synod 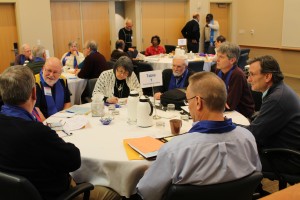 Commissioners of the Synod of the Trinity interact during a getting-to-know-you exercise on Monday.

The drive to State College, PA, in late March included signs of what had been and what was ahead. With spring only a few days old, trees were beginning to bud with new life while there were still remnants of snow on the ground, reminding everyone of the beauty of winter that had just passed. As for the 50-plus Synod of the Trinity commissioners and ex-officio members who converged on the Penn Stater Conference Center Hotel for the first Assembly Meeting of 2015, they, too, looked into the future and reflected on the past as a new Policy Governance Manual was approved and put into place.

While this action was at the forefront of the two-day meeting in State College, there was also plenty of time to pray, sing, hear challenging sermons and discuss Synod-related items. There were also presentations for One Great Hour of Sharing and from the Mid Council II Response Advisory Group, a discussion about the Synod’s upcoming 300th birthday celebration and an offering to support the work of the West Virginia Ministry of Advocacy and Workcamps (related story here). 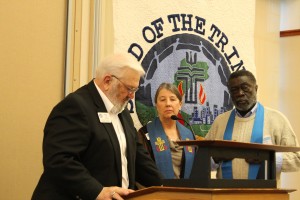 The meeting began with a worship time led by the Rev. Ralph Hawkins, the executive presbyter and stated clerk for the Presbytery of Shenango. Among the insightful comments he made was that “What you win people with, you win people to.” Also during the opening worship, commissioners received stoles to more clearly identify them among the group, and since nearly one-third of the commissioners were new, an introduction of them was also part of the agenda. The morning continued with the installation of Barbara Chaapel (Presbytery of Philadelphia) and Johnnie Monroe (Pittsburgh Presbytery) as moderator and vice moderator, respectively.

A report from Stated Clerk Wayne Yost followed and led off with news that the Rev. Dr. Bruce Stevens had expressed appreciation following his designation as executive emeritus. Bruce had received a framed certificate during a surprise ceremony at a February meeting of the Presbytery of West Virginia.

Approval of the Policy Governance Manual came next, with a nearly unanimous vote agreeing to accept it. Prior to the vote, the manual was discussed in sections and questions and comments were taken from the floor. A first reading of the manual was held at the October 2014 Synod Assembly meeting. Later in the meeting, a motion was passed to allow the Executive Leadership Team to serve as the nominating committee to gather commissioners to serve on the first governing commission. 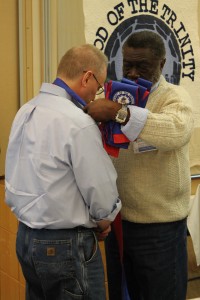 Prior to lunch and all throughout the two-day Synod Assembly, music by pianist Benjamin Bergey was featured.

Continued discussion on the Policy Governance Manual continued after lunch as a motion was approved to temporarily suspend the Standing Rules dealing with committees in the Synod that are not required in the Book of Order. The creation of task groups was also authorized for the purpose of working on by-laws and standing rules.

The Monday afternoon session continued with commissioner-guided table discussion led by Synod Transitional Executive Susan Faye Wonderland. The purpose of the talks was to allow the commissioners to become better acquainted with one another. The executive presbyters and presbytery leader team gathered in a separate room to engage in their own conversations.

Ruling Elder Laura Williams led discussion on a year-end budget and finance report. New streams of income to the Synod through its added bookkeeping duties and by contributions to the Presbyterian Mission Exchange have helped the budget. A motion from the October meeting that asked the Synod to give $200,000 to presbyteries with shrinking budgets and that was referred to the Budget and Finance Committee was discussed. The committee recommended that the motion by denied, pointing out instead that presbyteries request New Initiative Funds from the Synod to help with their shortfall. Upon discussion, a new motion was requested that asked that 1 percent of the Synod reserves during the next three years be used to help struggling presbyteries, but that motion failed.

The Monday evening session opened with John Bolt speaking about the Synod’s 300th anniversary, which will take place in the fall of 2016. After receiving confirmation from the body that a celebration of some sort was in order, the group brainstormed ideas on how to celebrate the milestone anniversary. A motion was approved to authorize an offering that included $300 from 3,000 entities that would raise $900,000 for mission projects. The evening ended with communion and motivational sermon by the Rev. Barbara Chaapel, who spoke of Peter’s reluctance to step out of the boat and walk on water at Jesus’ request. Barbara challenged those gathered to “step out of the boat and take a chance.” 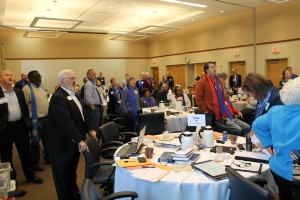 Singing was a common activity throughout the two-day Synod Assembly in State College. Pianist Benjamin Bergey led the group in song various times.

Tuesday morning, following opening devotions and prayer from Susan Wonderland, included a presentation by Dana Sutton of the Mid Council II Response Advisory Group. Among the discussion topics was the General Assembly’s desire to reduce the number of synods from 16 to 10-12.

Dianne Kareha followed with a video on the work still being done in New Orleans through One Great Hour of Sharing and its Operation Homecoming initiative, which is helping to rebuild years after the Hurricane Katrina disaster.

Note: To view a photo gallery of pictures from the March 23-24 Synod of the Trinity Assembly Meeting in State College, PA, click here. The docket and related paperwork can be found here.