It’s been no secret how much snow has dropped on the Boston area this winter. In many places, in excess of 100 inches of the white stuff has handcuffed the area, the most that region has seen since records were first kept over 140 years ago. That snow has also caused mass destruction, with many buildings’ roofs collapsing under the weight of the snow. 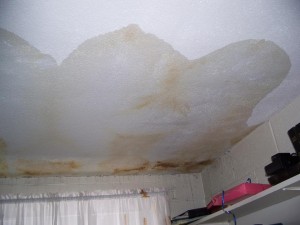 Water spots are visible in the ceiling of the choir room at First Presbyterian Church of Dunbar, WV.

Much of the area just south of New England was spared from that excessive winter weather, although parts of Pennsylvania, West Virginia and Ohio did get its share of precipitation. In West Virginia, back-to-back eight-inch snowstorms came through the town of Dunbar in February, and while those totals are not out of the ordinary or even extreme for that area, they were enough to cause an estimated $20,000 in damage to First Presbyterian Church.

And at nearby Richwood Presbyterian Church, it had to cancel a Sunday morning service due to a water pipe break in a second-floor bathroom that caused a “wall of ice” to form near the church’s back door. The water flowed down three stairwells before reaching the basement. Ice did not form on the wooden steps, but it was roughly two inches thick and a couple feet high at the door, causing people to have to chisel their way out to open the door.

A damage estimate at Richwood PC has not been determined, but Bob Johnson, a clerk at the church who doubles as the mayor of Richwood, thinks its very possible that areas of the ceilings and walls will need to be repaired once a more comprehensive inspection is done.

The conditions were worse at First PC of Dunbar where a flat roof that is on a nearly 20-year repair cycle is being blamed for the trouble there. Melting snow weaved its way from the roof down to the church’s Fellowship Hall and eventually into the choir room, causing damage that forced the congregation to cancel several of its regular programs. First PC’s monthly “Got Lunch?” program was canceled for March, and a weekly Lenten Luncheon scheduled for the building had to be moved to another church in the area.

“I do not think God ever intends for roofs to leak in churches or in people’s homes,” said interim pastor Patricia Jarvis, who is in her ninth year in that role at First PC. “I don’t think God sent that. I do think that God redeems the challenging things that happen in our lives, and I think that’s what has happened. That sorry event has been redeemed by the help of our neighbors, the good will and affection of our neighbors.”

Pastor David Bush is a consultant at First PC – his home church – after having served on the Building and Grounds Committee there for many years, a committee his wife, Theresa, currently serves on. Despite the setback, David, who is currently the interim pastor at nearby Winfield PC, also sees plenty of good coming from this misfortune, especially with the community rallying behind the congregation. 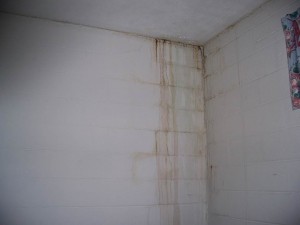 The rear corner of the Fellowship Hall is stained by water caused by melting snow and a leaky roof.

“Building problems like this are things that God can help you through but has no part in starting because we live in a fallen, evil world,” David said. “There’s not much you can do about it, but God can help you through it. With the church communities we have here, we have plenty of extra volunteer help and people willing to let us use space and things like that if necessary. That just helps pull the whole community together better. I think that’s part of what God is doing in Dunbar.”

Water was first discovered on Sunday, Feb. 22, running down a back corner wall in the Fellowship Hall. Below the Fellowship Hall is a choir room that also sustained some water damage. Both rooms had damage in the ceilings, but the lights and circuit board were determined to be free of water following a close inspection. With the ceilings dripping, the curtains and floors were also very wet, but the carpeted areas were able to be dried with large fans and escaped further damage.

“I think it’s going to cause folks here at First Presby to look a little more carefully at what we’re doing and what we can do best to use the facilities we have better,” David said. 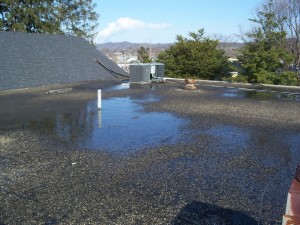 The flat roof at First PC of Dunbar is partly to blame for water that has seeped into the church’s Fellowship Hall and choir room.

As of mid-March, a plan to repair the leaky roof was not in place, with First PC’s Building and Grounds Committee reviewing possible solutions to the problem. Among the options was to replace the roof for the third time in 60 years, but because it’s a flat roof, it will probably result in the same leaking problem 20 years down the road. Making it a rubber roof would be another option, but it would involve getting rid of air condition units on the roof that are no longer in use. That would be a costly alternative, as would changing the roof altogether and making it a slanted, metal roof that would last roughly 40 years but could have a dollar figure in excess of $60,000 attached to it.

Inside, a washing machine will help take the stains out of the curtains, and paint will remove the same from the walls. But the biggest asset to helping get First PC of Dunbar back to regular working order is coming from the community itself, an aspect that’s not lost on David.

“God’s making us a larger congregation instead of having the Presbyterian congregation, the Methodist congregation, etc.,” he said. “We’re growing closer together, community-wise, all the way around. I think events like this and some of the things that have happened with some of the other churches, people have pitched in and it helped pull us together as Christians, and I think that’s part of what’s taking place.”