Students at Westminster College transformed as they ‘Experience Alaska’ 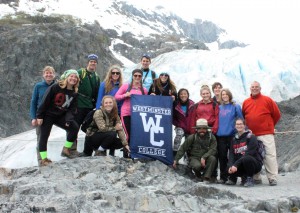 This group of Westminster College students spent some time at Exit Glacier learning about global warming during their “Experience Alaska” trip in 2016.

Westminster College is tucked into the western edge of Pennsylvania. Students who attend the four-year liberal arts college most likely aren’t thinking they’re going to enjoy a transformational experience in Alaska during their stay in New Wilmington, PA. But thanks in part to Jim Mohr, the college’s chaplain and director of Church Relations, that opportunity is presenting itself to students on an annual basis.

In May of 2016, Jim and a group of 12 students and one other Westminster staff spent two-plus weeks traveling to and around Alaska as part of a program aimed at bringing a new perspective to the students. The “Experience Alaska” initiative went so well that 17 students and leaders will be heading back to Alaska this year from mid-May to early June in hopes of duplicating last year’s memories. (View a video of the 2016 experience here.)

“We want our students to come back transformed into a different person,” Jim explained, “to having a life of service, being able to see the big picture in the world, being able to do some personal discernment and to get out of their comfort zone.”

Westminster College is one of six colleges and universities in the Synod of the Trinity region that have Presbyterian affiliations and receive financial support from the Synod.

The original trip spawned out of a conversation Jim had with Westminster College alum Matt Schultz, who is the pastor at the First Presbyterian Church of Anchorage, AK. Matt mentioned to Jim about possibly bringing a group of students to Alaska, which was something Jim had considered in the past. This got the ball rolling again, and with the help of a grant from the Council of Independent Colleges, the “Experience Alaska” program was able to get off the ground.

With an eye toward spiritual development, vocational discernment and community service, a trip was developed for 2016. Those targets were hit through interaction with native Alaskans and time spent with the area’s leaders, allowing the group to learn about the culture, history and environmental issues that plague the region.

Among the high points was time spent at Exit Glacier Park where the melting of glaciers was discussed, leading to some spirited conversations on the top of a mountain in the national park. 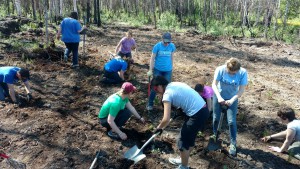 “We sat up there and talked about creation, evolution and the change in environment,” Jim recalled. “Spiritual development is a big part of what we do. We begin each day and end each day with some devotion time. The end time is really an hour and a half, two hours of reflection. We spend time in prayer, we spend time doing some journal writing and talking about where they saw God present today. What is God doing in people’s lives? What’s God doing in your life? Every day there’s a conversation about the role that God plays in the process.”

Not only are the students and leaders able to enjoy the marvelous beauty that Alaska has to offer, but they can take a deep look inside their selves and try to discern what path to take in the final years of college or as they look farther down the road.

“I had a kid who was a rising senior who confessed to us and no one else that he’s been an education major all this time because his parents were teachers and he thought that’s what he wanted to do,” Jim said. “He realized he has no interest in doing that whatsoever.”

Sponsored by the Office of Faith and Spirituality at Westminster College, the trip is open to anyone on campus, but because of the interest a selection process is used to determine who will go. Around 150 students showed interest in the 2017 trip, and a process that included questionnaires and interviews was used to trim the group down to the final 17. Once the group was selected in September, the students met monthly to discuss topics and books to help gain some familiarity with each other.

Fundraising is also in integral part of the trip, which this year will cost each student $1,200. A large donation to the college earmarked for campus ministry plus the grant from the Council of Independent Colleges are helping to offset many of the expenses incurred by the group.

This year’s trip will include a three-day stop at Denali National Park where the group will stay at a field camp and learn about environmental changes in the park from geologists. It all adds up to an 18-day trip that will have a lasting effect on those who are involved.