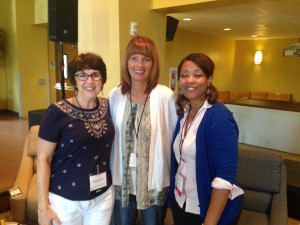 Pictured here are three PCUSA staff from Louisville participating in the Sudan/South Sudan conversations at the New Wilmington Mission Conference. They are Debbie Braaksma, coordinator of the Africa Office for the PC(USA) World Mission; and Nicole Gerkins and Lynne Foreman, Mission Engagement and Support Staff.

For those living in the United States, Africa is a world away, but what is happening there is nonetheless very real. There’s assault, mutilation, rape, torture, looting, people starving to death, the destruction of homes and other war crimes prevalent on a nearly daily basis. And this situation wasn’t lost on the New Wilmington Mission Conference.

On Tuesday, July 25, a special conversation was held on the region and the Sudan/South Sudan Mission Partnership Network with a gathering of 30 people from Ohio and western Pennsylvania at the conference at Westminster College. The talks focused on the human tragedy that is occurring in these northern African countries. While the United Nations Human Rights Watch is calling this situation an ethnic-cleansing campaign by the government, the average American – or for that matter Presbyterian – hears or reads very little about this tragedy.

As most of the world are bystanders watching and hearing shocking, vivid stories of what is going on, Presbyterians are doing their best to respond by working together through World Mission, Presbyterian Disaster Relief, Mission Engagement and the Sudan/South Sudan Mission Partnership Network as well as other International Relief Agencies in the region. These groups are helping people of all ages deal with trauma, humanitarian needs in providing food and water, and finding ways to educate about peace where there never has been a lasting peace for the people who live there.

The Rev. Sylvia Carlson from the Presbytery of Redstone was the host of the informative conversation by Debbie Braaksama, coordinator of the Africa Office for the PC(USA) World Mission; Lynne Foreman and Nicole Gerkins, Mission Engagement; the Rev. Denis Sciuto, Shenango Presbytery; and the Rev. Dave Carver, Pittsburgh Presbytery; during the afternoon gathering at the NWMC.

Debbie announced that there will be a new campaign beginning in August 2017 by the PC(USA) titled “Give Hope To South Sudan” that asks for prayer, action and to give in support of humanitarian efforts to help people there. Go here for more information.

Redstone, Shenango and Pittsburgh Presbyteries, in honor of the Synod of the Trinity’s 300th anniversary celebration, have received $4,000 each from a “Sowing the Future: Gifts of Abundance Grant” that are awarded “In recognition and honor of our region’s continuing participation in world mission.” The three presbyteries applied for global mission grant monies from the Synod to be used in a partnership with Christian friends in the Sudan/South Sudan region. These funds are being used specifically for humanitarian and disaster relief to combat the daily unfolding crisis endured by the people living there. All three presbyteries were grateful to the Synod for this grant supporting a humanitarian response to sisters and brothers in great need.