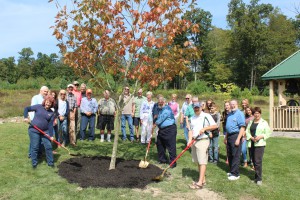 There are not many ways an organization can celebrate its past by also looking to its future, especially when that history covers three centuries and the goal is to encompass the next 300 years. That was the task at hand for the Synod of the Trinity in 2017 when it celebrated its tricentennial. Sure, shirts and buttons were made, and cake and ice cream were eaten, but finding an effective way to nod to what’s ahead was a challenge.

“We were trying to come up with ways to celebrate the fact that we have been in existence for 300 years and we look forward to another 300 years,” said Synod Treasurer and Strategic Ministry Support Chantal Atnip, recalling a conversation that was had among the Synod’s Governing Commission. “We wanted something that would be lasting, not just a brief nod to our history and our future.”

What was suggested was planting a tree at each of the Synod’s active camps. The Synod agreed to fund the project with a maximum gift of, appropriately, $300 to each camp for a tree species of their choice. Everything from dogwood to elm to maple was selected.

“It was felt that a living tree was a very good symbol of where we are in our existence right now,” said Chantal, the coordinator of the tree-planting program.

Five of the plantings were done in the fall, with the others scheduled for the spring of 2018. In some cases, the tree-planting ceremony was held in coordination with a presbytery meeting at the camp, while in other instances it was planned around a camp board meeting or a youth retreat at the site. 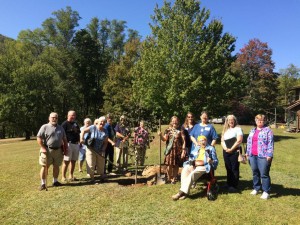 After a litany provided by the Synod was read at the tree-planting ceremony, those who had gathered were asked to name things that they hope the tree “sees” as it grows and has long life under God. At the Kirkwood Camp and Retreat Center in Stroudsburg, PA, a junior high retreat was being held the weekend of the tree-planting, and those youth were asked to express their thoughts on that visioning.

“I was amazed how much the youth that were there were able to use their imagination and come up with ideas of faith, laughter, witnessing and playing on the fields,” Chantal said. “The other thing that made this particular one special is that Kirkwood is a recent merger of two camps – Brainerd and Kirkwood – between two presbyteries (Philadelphia and Lehigh). This tree was planted at Kirkwood but right next to the flagpole from Brainerd. It allowed us to look forward not just as a Synod but as a camping ministry as well.”

The tree-planting was timely at Krislund Camp and Conference Center in Madisonburg, PA (near State College). Not only did Krislund plant a tree from the Synod, it decided to purchase two others on its own as part of a larger initiative.

“They recently lost a tremendous number of trees,” Chantal said. “Some were due to some logging activity, then there was a major storm. They have done a major tree-planting effort there. They got a federal grant to plant hundreds of trees recently, but then with our encouragement offering this, they decided to plant three special trees, one of which is the one we helped plant. Instead of being out in the wooded area, they are in the camping area.” 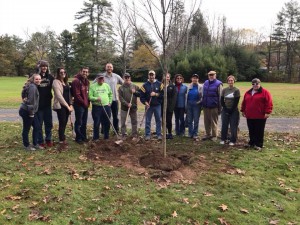 It has been a blessing for Chantal and the Synod to connect with the region’s camps and, much like a tree, help keep them growing into the future.

“I think the vision to do this was definitely God’s hand,” Chantal said. “Trying to decide what to do in recognition of 300 years of existence has not been easy. We don’t want to spend our time looking back, we want to be looking forward. We don’t want to use resources for things for a party, necessarily – although we’ve done a little bit of that. We’ve been trying to celebrate our 300th anniversary with positive, forward-acting activities, and I think that the idea of planting trees – especially at all of our church camps where that is an opportunity to touch the future of our church, our youth – was definitely the hand of God.

“This has been a really fun project.” 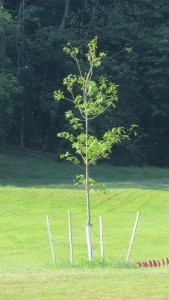 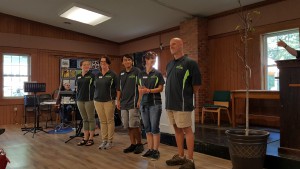 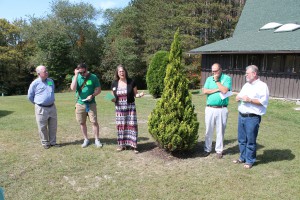