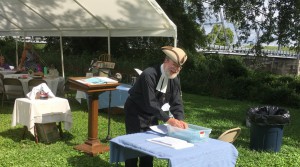 The Rev. Charlie Winkelman of Jersey Shore Presbyterian Church prepares for his part in a service celebrating the start of three congregations that occurred in 1792.

Over two centuries ago a missionary named Isaac Grier from Carlisle Presbytery preached under an elm tree along Pine Creek in Clinton County near Jersey Shore. In that same year, 1792, he went on to organize three churches in what is now the Presbytery of Northumberland and was called and ordained as their first pastor. Now, 225 years later, those three churches – Lycoming, Great Island and Jersey Shore – continue in vital ministry as the oldest established church in each of their respective communities.

A celebration of their history was held on Sunday, Aug. 13, when over 100 people from the three congregations gathered at that same “Tiadaghton” elm tree where it all began for a morning communion service and afternoon picnic. All three of the current pastors had a hand in the service, with the Rev. Dr. Larry LeFeber (Lycoming PC, Newberry, PA) leading the liturgy, the Rev. Charles Winkelman (Jersey Shore PC, Jersey Shore, PA) celebrating communion, and the Rev. Taylor Camerer (Great Island PC, Lock Haven, PA) preaching the word.

Despite the common background the three congregations have, it wasn’t until a Presbytery of Northumberland meeting a few years ago that they realized they were closely related. At that meeting, former Executive Presbyter Bill Knudsen offered a prayer for the three churches who had the same start date in October of 1792. It got Taylor wondering about their shared history.

“None of the churches realized they had this thing in common,” Taylor said. “They all separately celebrated their 200th anniversary on the same day without much knowledge of each other’s events. I find it very interesting that it’s kind of been rediscovered.”

Research revealed the historic event under the Tiadaghton elm tree near Pine Creek. “Tiadaghton” is an Iroquois Indian name for Pine Creek, which is the largest tributary to the West Branch of the Susquehanna River. Rev. Grier is credited with preaching the first sermon for both Great Island Church and Jersey Shore Church (then known as the Pine Creek Church).

Forty-six years earlier David Brainerd, a well-known missionary who was ministering to the Indians, had made his way through this same area. He spent over a year preaching to the Indians as well as the settlers in the area, preparing the way for the start of the three Presbyterian congregations in 1792. 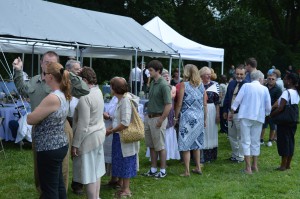 Over 100 people from three congregations turned out for a celebration of their shared history.

In a joint history compiled for the celebration, Rev. Winkelman added, “William Penn’s guarantee of religious freedom turned the eyes of the religiously oppressed in Europe toward America. This was particularly true of the Scottish and Scotch-Irish immigrants, which led to the founding of Presbyterian churches in Pennsylvania. In 1680, a great number of them left for America. Many came to Pennsylvania and pushed their way up the Susquehanna to unsettled lands.

“These Scotch-Irish were sturdy and used to hardship. They loved God and served him faithfully. Hating tyranny, they were Calvinistic in belief, self-reliant and able to endure the dangers of the wilderness.”

Despite having October as the shared anniversary date for the three congregations, they decided to gather as one in mid-August, combining their three summer picnics for one meaningful worship service.

“Sharing communion. That’s the real point in getting together,” Taylor said.

All three congregations were involved in planning, setting up large tents, tables and chairs, and bringing the food. Some even dressed in period costumes. And the Lord blessed the event with beautiful weather.

Something else the congregations share is the Rev. Richard Nyakaana, an international evangelist who planted and oversees seven churches in Uganda and who has at one time or another preached in the pulpits of the three churches. Sensing a desire to help with his overseas ministry, the money received from the service’s offering is going toward helping to plant another new church in Africa.

“In honor of the beginning of our congregations, we’re going to help facilitate the birthing of another church,” Taylor said. 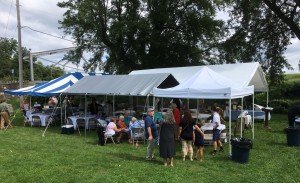 A celebration honoring 225 years of worship was held in mid-August near an historic Tiadaghton elm tree.

The service also included traditional bagpipe music, including the playing of “Amazing Grace” during communion. While bagpipes weren’t part of the early services at the three churches, that sound relates to the Scottish heritage of the Presbyterian Church and worked well in a rural setting along Pine Creek that lacked electrical service. Those primitive ways are all part of the early history of the congregations.

“225 years – they were always in transition,” Taylor said. “They were always in the midst of a crisis of one sort or another. All three churches survived the Civil War. Jersey Shore had the first pipe organ installed in the entire area, and the church and the pipe organ promptly burned to the ground seven months later. They had a pipe organ for one Christmas.

“I think it’s really healthy to look back. There was discipline needed when the only court was the church. In primitive America, it was the clergies that were the Small Claims Courts. It was the board of elders who held these small communities together in terms of law and order.”

It’s all part of the history of three congregations that have survived the bumps in the road for over two centuries.

“We’ve seen God’s faithfulness through the years in so many ways, through the ups and downs,” Taylor said. “We grow by the challenges that were tossed, and it’s the hard times that grow us up in our faith. God’s been behind and sustaining things, whether they were good and bad or up and down all the way through. And without God’s hand upon us, we would have messed it up ourselves long ago. It’s only because of the divine that we have all been here 225 years.”