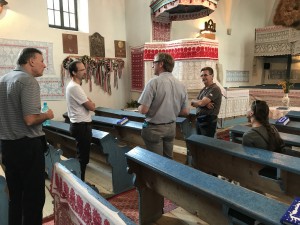 Lehigh Presbytery Moderator Jack Felch (not pictured) and Jim Ferlino (left) traveled to Romania as part of a partnership with the Hungarian Reformed Church. While there they visited a village church.

In June of 2017, Lehigh Presbytery commissioned Jim Ferlino and Jack Felch to continue its decades of partnership with the Hungarian Reformed Church of Romania via a journey to Romania. The purpose of the trip was to extend greetings of Christian fellowship to the Joint Synod of the Evangelical Lutheran Church of Romania and the two Districts of the Reformed Church in Romania. The travel occurred from July 1-8 and was made possible through a Synod of the Trinity Mission Travel Grant.

Bishop Kató of the Transylvania Reformed Church District invited a delegation from Lehigh Presbytery to be present for their General Assembly on July 4-5. What follows is a recap of the trip as written by Jack Felch, the moderator of Lehigh Presbytery:

Although the relationship background to this trip spans decades, the journey was a new experience for both travelers (Jack and Jim Ferlino). We ventured into uncharted waters of inter-denominational relations, intergovernmental relations and complex historical events both political and ecclesiastical over the past 500 years. The person-to-person relationships were uniformly cordial. Our “American perspective” clearly had its limitations and biases.

We were fully accepted as colleagues in the Reformed tradition during these celebrations of the 500th anniversary of the Reformation. Relationships with representatives of European denomination were warm and memorable. The great distance over which we traveled was very much appreciated by our Romanian hosts.

With thanks to God for global relationships among sisters and brothers in the one holy catholic Church of Jesus Christ, the entire journey was meaningful and inspiring. We enjoyed three full days of escorted tours to formal city places of worship and to ancient village sanctuaries. We toured historical Reformation archives in the Theological Seminary and visited mission programs for impoverished Roma children and a summer youth camp for aspiring classical musicians.

We were one of five international representatives at the General Assembly, which occurred on July 4, 2017. Also participating were delegations from Scotland, Ireland, the Netherlands and Germany. The events of July 4th began with a worship service in the Lutheran church, followed by the General Assembly in the Theological Seminary and culminated with a three-hour ordination service for eight new Reformed pastors and five new Lutheran pastors held in the Reformed Church Basilica. Group lunch and dinner provided time for informal relationship building.

A significant part of the General Assembly was the signing of a Joint Statement by the Evangelical Lutheran Church of Romania and both Districts of the Hungarian Reformed Church in Romania. Social righteousness takes on a special connotation in Transylvania. In many ways, our Hungarian speaking hosts are an oppressed minority in their own land. This YouTube video helps to appreciate the complexity of their situation.

During our visit we traveled to four small villages and met with local pastors to discuss their challenges and ministry programs. Work among the Roma (Gypsy) people and children was particularly impressive.

Jim Ferlino added this commentary about what he and Jack experienced:

Our experience was centered around the 500-year celebration of the Reformation, and much of our time was spent meeting people from other churches and other faiths. Additionally, we spent many hours talking with our Hungarian host and many other local Hungarians that we met through our travels. 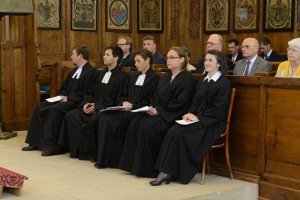 An international contingent, including two members from Lehigh Presbytery, sit behind five Lutheran pastors who were awaiting ordination. In the second row, Jim Ferlino is second from left and Jack Felch is third from right.

Many of our discussions centered around the church beliefs along with the historical background of Hungarian/Romanian relationships. This led into some very involved socio/political discussions about the thoughts and feelings of Hungarians living in Transylvania, a region that had once been officially Hungarian but now is part of the Romanian state. We asked the same questions many times and in different ways because it was difficult for us to understand the depth and impact of this situation within the social and economic confines of everyday life.

To explain this simply, the Hungarian people within Transylvania do not feel properly represented within their region and they worry about the future of their families. In many ways, the Hungarian Reformed Church provides some stability and hope for a better future. Hence, the close intertwining of the church within the socio-economic concerns and development within Transylvania.

We spent a lot of time visiting a camp, a children’s school under the Diaconia program, and visiting other local pastors and residents. This gave me a chance to see how local organizations put into practice the teachings of the church by helping those less fortunate. The camp, through church sponsorship, provides music instruction for students from ages 6-17. This includes some world-renown musicians. Their hope is to help the youth prosper while immersing them in a healthy environment that exposes them to their Transylvanian roots.

Most homes consisted of a small single-level house that sometimes housed 10 people. Many homes did not have running water or bathrooms, and the families got water from a local well shared by the group. The water must be sterilized before use. The homes had limited beds so the inhabitants rotated turns sleeping to have a bed to use. As you would expect, these conditions do not provide for a stable upbringing of children. Diaconia does more than schooling the children. They provide them meals and an environment that provides them hope.

This work has given me a chance to hear perspectives from ministers and members of other churches so that I could better reflect on my beliefs. As a lay person without a lot of religious and historical background, I learned a lot about the Reformation and its role within the Protestant history. In many of our discussions, we talked about the ways churches are constantly reforming regarding current-day issues.

I got a chance to ask some challenging questions that have bothered me about religion in general. The answers and discussions that I had with each of the different people was invaluable. This included topics on religion and war, women’s roles in the church, bonding with those of different beliefs, Muslims and Christianity, and many other subjects. We didn’t all agree in our opinions but the discussion was lively, respectful and enlightening. This provided me a helpful example of how those outside of our church could handle differences of opinion.